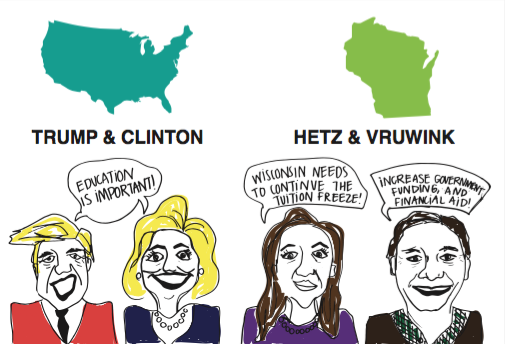 It is that time of year again. The time when millions of people head out to the polls to cast a vote, more often than not, for the president of the
United States.

What is unapparent to many is that the ballot contains far more candidates for office than just the presidential candidates. Many people might be unaware of the local candidates on the ballot, but for many communities these men and women are more important than the president.

Local officials are more in touch with our everyday lives than the presidential hopefuls. They are in charge of dictating what our children learn, how our roads get plowed and even sometimes how much taxes you will pay.

Local officials know their constituents, they care about you because they see you more often than not. When is the last time a presidential candidate came knocking on your door asking for your support?

These representatives are your direct contact with law makers and the laws that are being made. They are the ones who are responsible for your concerns and will often find solutions
to them.

In many communities they are your first line of defense when trouble arises. Local officials are vital to economic growth, public safety and everything
else imaginable.

These representatives can be from all walks of life and come from many different backgrounds. They are the ones who actually represent you and your beliefs. They represent a much smaller portion of the population so it is more likely they are an outcome of common belief in communities.

The San Gabriel Valley Tribune said “Advocates of increased civic participation often point out that votes cast in local races can have a much greater impact than larger elections.”

Decisions about traffic patterns, street and infrastructure maintenance and preparations for El Niño are all made at the local level. This is providing a dark glimpse at what could happen with low voter turnout.

Voter turnout is crucial in a local election. If you are willing to put your day-to-day lives in the hands of others then that is not a concern to you. If you do not want to leave it up to chance, then go out and vote for the best candidate.

It’s hard in this year’s election with many people questioning whether or not they will vote.

This sad reality is brought to you by the small portion of the population that voted in the presidential primary. This year it is going to be hard to predict who will win in local elections because of the threat of low
voter turnout.

If you do not want to vote for either presidential candidates, it is crucial that you vote for local elections. These candidates will help you when you need someone to listen to
your complaints.

They are truly your representative not in name only, but in action.

Before Nov. 8, spend some time reading your local newspaper and exploring what Google has to offer on the local elections in your voting area.