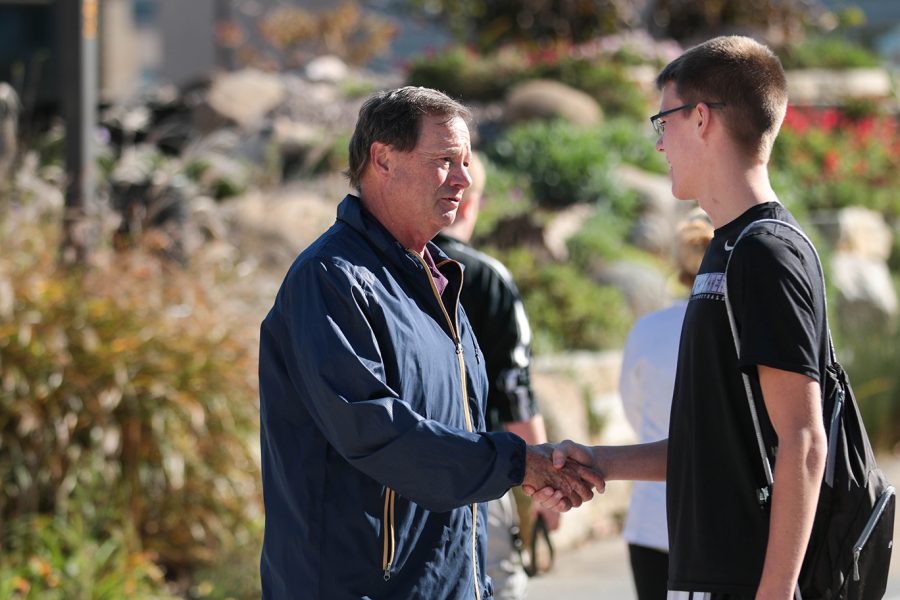 43rd District candidate Don Vruwink greets students on campus and urges them to vote for him in the local elections on Nov. 8. Vruwink defeated his opponent Allison Hetz, a University of Wisconsin-Whitewater Alumni

After a long night of vote-counting Don Vruwink (D-Wisconsin) has won the race for the 43rd Assembly District State Representative seat against opponent Allison Hetz with 16,178 votes.

Vruwink, a retired four-decade history teacher in the district, began the election cycle by defeating his Democratic primary opponent Anissa Welch during the primary election, which brought him to the general election against Hetz. Both candidates are UW-Whitewater alumni.

The campaign process began for Vruwink about six months ago, with the strategy of allowing his constituents to get to know their candidate. Vruwink says it’s a reason as to why he won.

There were many issues that Vruwink addressed in his campaign, and plans to address if he is elected, such as non partisan districting, money for education and building roads.

“Education is my major background. I’m doing some things already with financial literacy and the trades industry,” Vruwink said.  “And as a school board member and an assembly person, I can really make that happen.”

“I think they’ve heard the message that their vote matters. And it really does. I’m hoping that they’re here not just for the presidential, but for the unified school district ,and for the assembly, for the senate,” Jan Bilgen, Associate Director for Career Leadership and Development, said. “People say millennials don’t vote, I don’t believe that.”

Hetz could not be reached for comment at press time.