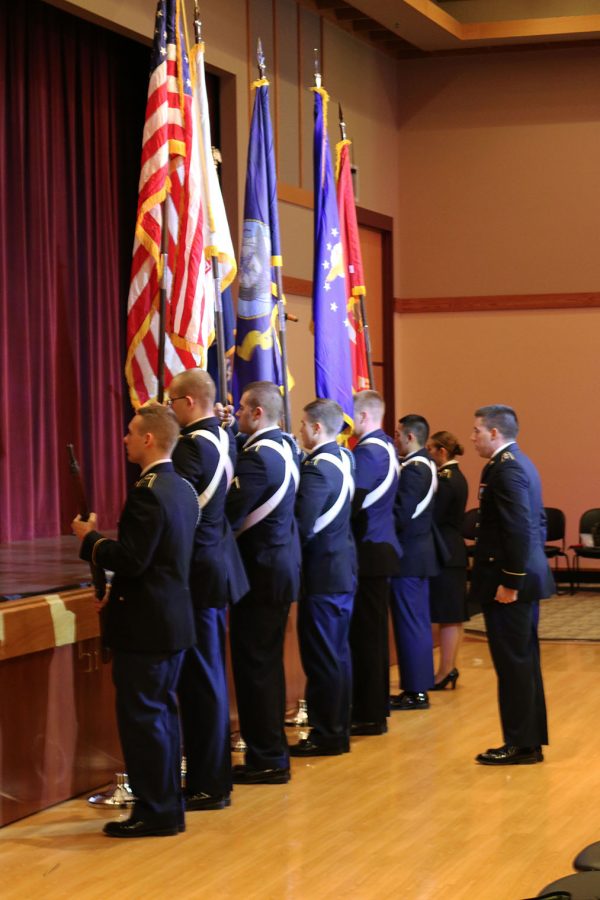 A military color gaurd stands to honor their service on Friday Nov. 11. The celebration invited veterans from on and off campus.

Veterans, students and community members gathered in the University Center Hamilton Room on Friday Nov, 11 to celebrate a day that Chancellor Beverly Kopper called one of the most humbling and inspiring days of the year.

“This day we recognize our veterans who have served our country with honor, and with pride, and make sacrifices that many of us will never understand,” Chancellor Beverly Kopper said.

The Ceremony began with Richard Harris, Veteran and Service Member Coordinator welcoming all to the event, with Chancellor Beverly Kopper to start off the ceremony.

Chancellor Beverly Kopper gave a speech to share her gratitude and to recognize those who spent time fighting for our country.

“On Veterans Day we honor those who are dedicated to something bigger than themselves.” Chancellor Beverly Kopper said.

Beverly Kopper finished her speech with gratitude to those on campus involved with helping University of Wisconsin-Whitewater obtain this certification.

Dylan Sessler, alumni of University Wisconsin-Whitewater class of 2015, and Staff Sergeant in the National Guard shared, celebrating today and thanksgiving we need to step away from our issues and remember the veterans and their strengths they give to the community.

During Dylan’s time on campus, he had done undergraduate research on veterans. During his research he had found almost all veterans told him the same thing, they wished they would have done more.

“Now imagine that for a moment, these men and women putting their lives on hold to serve their country, for the sake of the nation for years is simply extraordinary they want to do more,” Dylan Sessler said.

Sessler thanked all the professors on campus for their knowledge and support to help him get to where he is now. He also thanked all the veterans for serving in something greater.

Guest speaker, John Christensen from Veteran Center in Milwaukee, had served in Vietnam from 1966-1969, works with veterans struggling to fit into society. He explains that Vietnam veterans had a hard time adjusting to society, and life after they came back from war. Many veterans faced high suicide rates, schooling had been a challenge, as well as veterans were receiving books months late into school.

Christensen shared life after war and how it has changed immensely. The medical world is hungry to learn how to treat veterans. The suicide rates have dropped. Schooling has been made easier with help on campuses for veterans.

“Vietnam not only changed me, but changed veterans,” John Christensen said.