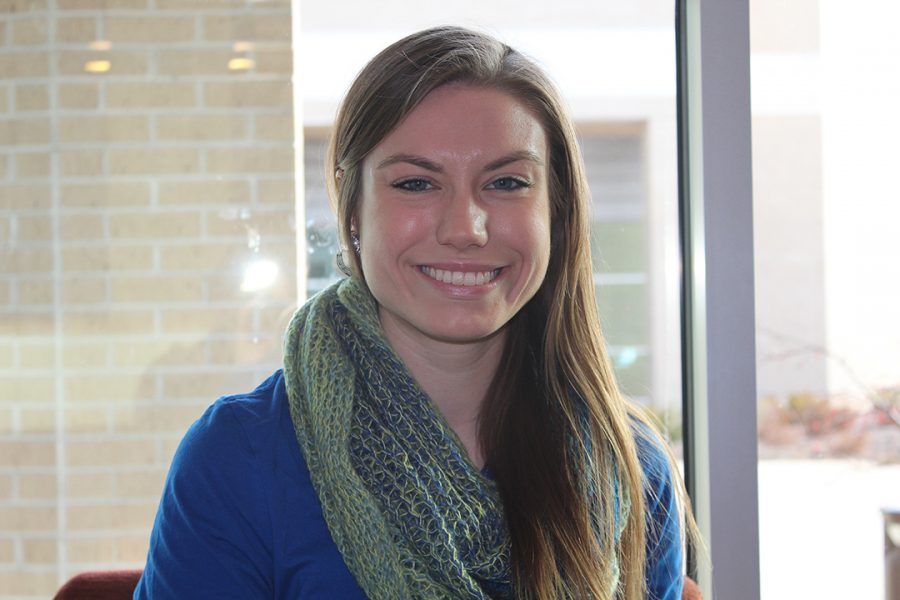 Jacqueline Schaefer, a psychology major, has been named the winter commencement speaker at the ceremony on Saturday, Dec. 17. After graduation, Schaefer says she hopes to attend medical school and enter the field of psychiatry.

For Jacqueline Schaefer, graduating college isn’t going to be the biggest moment of her life. Her life will be filled with moments that help to build the person she is going to be.

As the December graduation student commencement speaker, her goal is to inspire other graduates to see the potential in life’s moments past, present and future, with her speech entitled “Moments that Make Us”.

“Something that I’ve been focused on are those moments, that when they happen, you don’t realize the impact they’re going to have on your life,” Schaefer said. “Those moments are so small and so powerful, that I really wanted to be able to just think about them and reflect on them.”

Schaefer wanted to focus on the graduates present, acknowledging just how significant college graduation is in the moment, as well as the implications the big event holds for their future.

“Graduation is one of those moments that really is just the start of something new, a whole new direction,” Schaefer said. “I wanted to think about that and also looking forward into the future, and how can we create these moments.”

Schaefer not only wants her audience to both reflect and look forward, but also the sense of connection.

For Schaefer, there have been not only many moments that have helped her succeed, but many people and experiences that shaped her as well.

Schaefer believes that much of her success is owed to her parents for always encouraging her to be who and what she wanted to be. This meant attending University of Wisconsin-Whitewater with a psychology major and looking into the field of psychiatry. She decided to look into that field after a conversation with her father when he told her that he believed she had what it took to go to medical school.

“I said, ’dad I really think I want to do this whole psychology thing, people are so fascinating, I want to figure them out, get inside their brains’, and he said, ‘what does it take to be a psychiatrist?’ Schaefer said. “He said, ‘I think you can do this’.”

The decision to attend medical school came from the desire to learn more in depth about the entire human body.

“You get to spend two years in clinicals, being a part of all of those different medical fields,” Schaefer said. “Which is fascinating to me. It got me hooked on the body.”

Although Schaefer is entering medical school with the hopes of becoming a psychiatrist, she is excited so see what other specialties and fields have in store that may become her future.

“I will definitely do a clinical in psychiatry, but then if I can I definitely want to do some pediatric ones,” Schaefer said. “I know I love kids, I’ve worked with them in a lot of different settings.”

As for medical experience now, Schafer works at Rogers Memorial Hospital in Oconomowoc as psychiatric tech. Her job involves working with many patients in the different psychiatric units, where she is available to answer questions, as well as make sure patients are following the rules of the units and following their treatment plan.

Much of her job requires her to spend time working with patients who have eating disorders, which has shown her how rewarding her future field can be.

“I love working with these girls and seeing them, when they come in and their very ‘I can’t do this, I can’t eat, you don’t understand, I can’t because of a, b or c.’ They all have their own unique different reasons,” Schaefer said. “And slowly, sitting with them, and talking with them and helping them get to the point where they can eat, where they don’t hate themselves for eating. It’s so cool.”

Throughout her three and a half years at Whitewater, Schaefer has been involved in many organizations and leadership opportunities. At the start of her sophomore year, she was hired as a peer mentor to help freshmen students through their first year of college.

She has also been a part of Psychology Club and is currently the vice president.

Schaefer will give her speech at the graduation ceremony Dec. 17 at 10 a.m. in Kachel Fieldhouse. The ceremony will also be live broadcast in Timmerman auditorium in Hyland Hall.