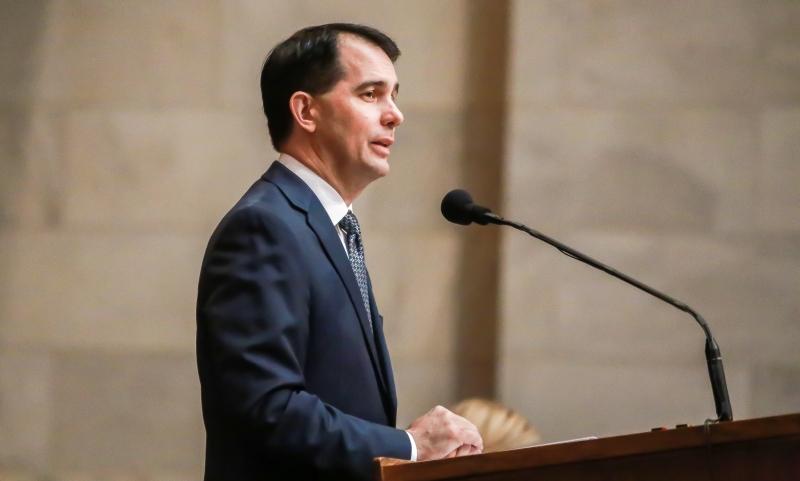 Gov. Scott Walker gives his State of the State address to Wisconsin legislators earlier this month. With a theme of “working and winning for Wisconsin,” Walker announced plans for a third UW tuition freeze and an unspecified cut for in-state students for the ’17-19 state biennial budget during his address.

In his seventh State of the State address earlier this month, Gov. Scott Walker promised that the upcoming ’17-19 state biennial budget wouldn’t just include a third UW System tuition freeze, but also a tuition cut for in-state students.

Until the budget numbers are released around mid-February, there’s no way to know how those proposed tuition cuts would impact the University of Wisconsin-Whitewater.

Vice Chancellor of Administrative Affairs Jeff Arnold says he needs to see the numbers first before it can be determined if any tuition cuts would benefit the university.

“Obviously it would be a wonderful thing for students if we could lower tuition, but from the university’s perspective, that tuition reduction needs to be offset with state funding support,” Arnold said. “That piece of it, the devil is sort of in the details, and hopefully it’s a one-for-one sort of offset.”

As of this academic year, UW-W is funded 90 percent by student tuition due to a 38 percent decrease – totaling $5.8 million – in state funding that was approved in the ’15-17 state biennial budget.

Arnold says it’s also unclear how any increased funding from the state would be distributed. There have been programs in recent years that have grown solely on student tuition, Arnold says, and there is no way to tell if those programs will receive state funding, or if operating costs would continue to rely on lowered tuition.

UW-W Chancellor Beverly Kopper says she appreciates Walker’s attention to tuition costs; however, she says she hopes the state would make up for the budget deficit caused by lower tuition by approving the UW System’s requested $42.5 million increase.

“I look forward to hearing more about his plans in his budget address,” Kopper said. “It would be my hope that if the Governor requests a tuition cut, and the legislature supports it, that the state would provide funds to replace the tuition dollars lost.”

In the SOTS address, with a theme of “working and winning for Wisconsin,” Walker said college affordability has been recurring issue at listening sessions.

“It wasn’t just students who are concerned about the cost of higher education – it is parents, grandparents, educators, and many others,” Walker said.