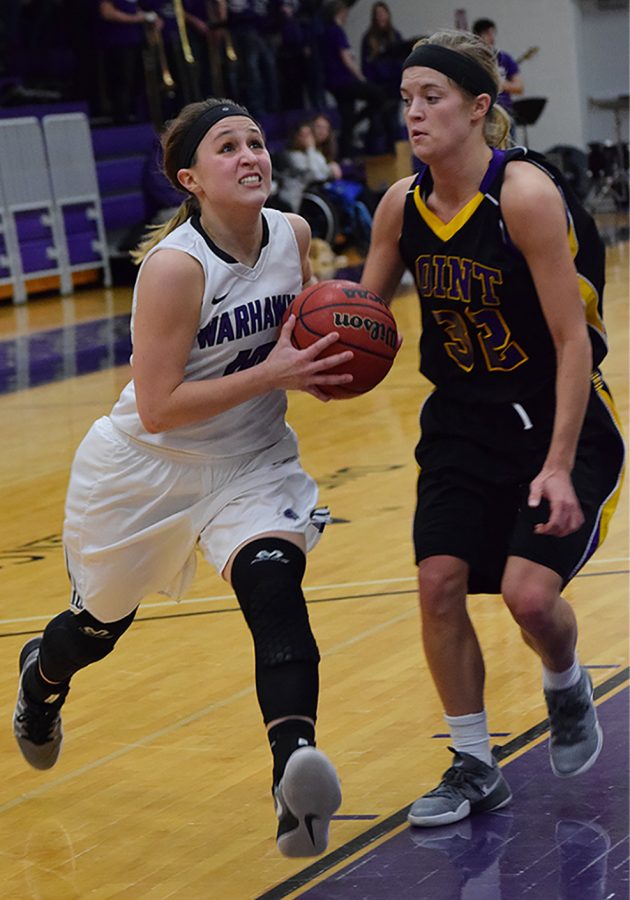 The No. 24 UW-Whitewater women’s basketball team (19-4 overall, 9-3 WIAC) ended its two game losing skid Feb. 11 vs. UW-River Falls with a stymieing defensive effort that lead to a 57-37 victory inside Kachel Gymnasium.

On Feb. 8, the Warhawks lost the team’s first home game of the year vs. UW-Stevens Point, which was highlighted by a 25-2 run by the Pointers to end the game.

The Warhawks struggled offensively vs. the Pointers, shooting 34.4 percent from the field. The Warhawks jumped to an early 9-4 lead, but had trouble keeping that pace up as they were outscored 49-27 in the second half.

The Warhawks turned the tables later in the week. The Warhawk defense held UW-River Falls to 29.2 percent from the field, and 10 percent from beyond the arc.

“I thought we did a nice job making sure the tempo of the game was in our favor, making sure it was fast paced,” Carollo said. “I think our press really hurt them quite a bit. We have to continue to work on our offense, it’s kind of in a struggle state right now, but it will come.”

Junior guard Malia Smith spearheaded the defense and ended up with a team high seven steals. The Warhawks’ press led to 27 turnovers for
the Falcons.

Carollo said that the defense did a good job moving their feet and rotating, and noted the importance of not getting silly fouls that would allow for easy points at the line.

Saturday’s game against the Falcons also marked senior day for the Warhawks. The two Warhawk seniors, Reilly Stewart and Andrea Olsen, were honored at halftime for their contributions to the team, which includes helping the Warhawks reach the Final Four in the 2013-2014 season.

Stewart, who shared the team high in points with freshman guard Becky Raeder, had 11 points. With the prospect of the Warhawks hosting future tournament games, the fact that Stewart played her last regular season home game didn’t set in, instead she had other feeling heading into the game.

“Feelings coming into it, a lot of excitement,” Stewart said. “I didn’t try to put too much pressure on this game. I just thought of it as another game.”

While the Falcons were held to 1-10 from downtown, the Warhawks shot a solid 7-18, good for 38.9 percent. Stewart was a big reason for that percentage, as she went 3-4 from three. Stewart talked about the preparation in practice that lead to the Warhawks big day from behind the arc.

“The last two days of practice we’ve been really focusing on offensive breakdown,” Stewart said. “The last couple of games we’ve been struggling with our offense and making shots. We just drilled it in practice and executed well.”

With just two regular season games left, tournament play is on the horizon for the Warhawks. Coach Carollo, who has lead the team to deep tournament runs before, isn’t too concerned about any game other than next one.

“We haven’t really set a sight other than winning our next game,” Carollo said.

Still, there is always a lingering expectation for the Warhawks.

“Our ultimate goal always in our program is to win a national championship and that’s something we talk about daily,” Carollo said. “It’s something that this group wants to do.”

The Warhawks will look to build on the last victory when they take on UW- Oshkosh Feb. 15 on the road.