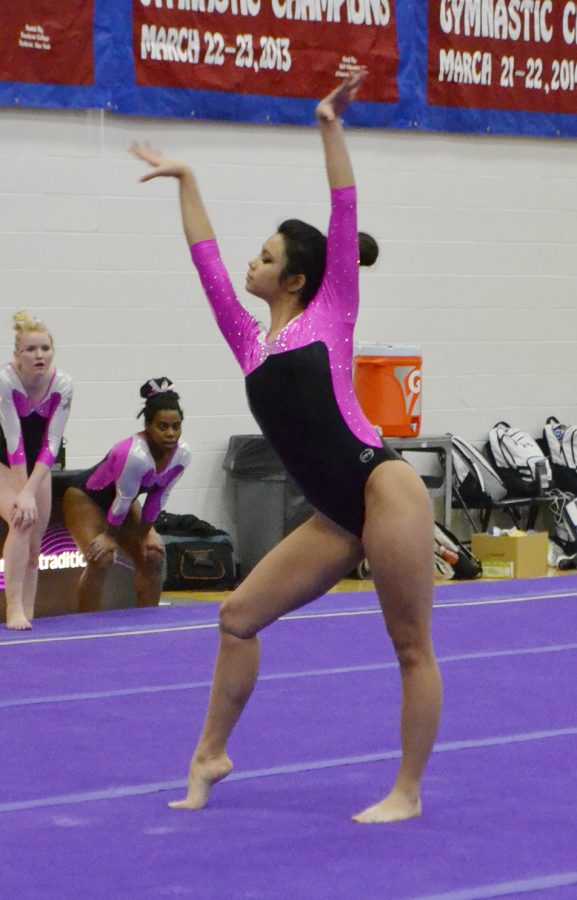 Sophomore Lisa O’Donnell won the vault, the uneven parallel bars, and the floor exercise to lead the team. O’Donnell placed first all-around with a score of 38.875, a National Collegiate Gymnastics Association national record.

O’Donnell accredits her success to the energy from her teammates. “It helps me so much when I know that my teammates are behind me and going crazy,” O’Donnell said. “They’re on the event with me, basically.”

Head coach Jennifer Regan said the team faced a lot of setbacks and injuries this past week.

“I was very proud to see that they could put that behind, and put it all together,” Regan said.

The Warhawks had a strong performance on the bars with a 48.125 team score. O’Donnell scored a 9.825 and tied the third-best score in the program’s history. Senior Mackenzie Smith tied for second with a score of 9.700, followed by junior McKenzie Foster with 9.600 to finish fourth.

The Warhawks finished the meet with a 48.200 in the floor exercise. O’Donnell scored 9.775 and tied for the program’s No. 10 score. Pickett placed second with a 9.750 and sophomore Franchesca Hutton in third with a 9.675.

Coach Regan believes this team stands out from others.

“They find a way to make it click and prove us wrong as coaches,” Regan said.

Honoring the fifth anniversary of the 2002 national championship team, Alumni were welcomed back as part of the meet.

“It was such an honor,” O’Donnell said. “They have all gone through this and it is so great for them to watch us do it.”

Regardless of injuries the Warhawks came out on top and remain undefeated.

“We are stronger than we know,” Regan said.

Coach Regan also said the team will be focused on one meet at a time and is striving to get better every week.