With three game-winning shots with less than two seconds left on the clock in the first and second rounds of the Division-III NCAA Men’s Tournament at Kachel
Gymnasium in a little over 24 hours, you know that the calendar has flipped its page to March, or should I say March Madness.

Augustana College (Illinois) was down by eight points with 40 seconds left against the University of St. Thomas before sophomore guard Crishawn Orange dribbled the length of the court and drained a buzzer-beater three to win the game 77-74 on March 3.

In the next contest, UW-Whitewater trailed nearly the entire game vs. the University of Northwestern (Minnesota) before a late rally and a three-pointer that seemed to levitate in the air before swishing through the net from sophomore guard/forward Maurquis Turner, right in front of the UW-W bench, with 1.3 seconds left to give UW-W the eventual 85-81 victory.

When the second round started March 4, UW-W again trailed most of the first half before furious back-and-forth rallies, a referee
mistake and another blown lead allowed the ’Hawks to tie the game with nearly 20 seconds left.

Orange then played the role of hero once again after, driving and pulling up from the right side of the free throw line and nailing a jumper with 1.6 seconds left to give his team the 72-70 lead, his third straight game-winner going back to the team’s conference championship game.

A desperation, off-balance jumper by junior forward Scotty Tyler was not close, and Augustana improbably moved on to the second weekend of the tournament.

The amount of craziness and close games where players from both teams were laying it out on the line knowing that one mistake could end their season or possible career was breathtaking to watch. There is a reason that the NCAA Tournament has earned the nickname of ‘March Madness.’

“Coaching years are like dog years,” Giovanine said. “We should have a defibrillator on the bench. There is part of the time where I feel like I’m just watching… It’s a players’ game and these guys just made plays.”

After the sense of extreme joy from winning the first round game, the Warhawks season ended with a 22-7 record in the second round.

“It was a really, really difficult game to lose,” head coach Pat Miller said. “I’m proud of how hard they battled, and it’s difficult to come out on the losing end of
this one.”

The first half of both Warhawks games were nearly identical as it was a back and forth battle between both teams where defensive stops were nearly impossible with both offenses humming.

In the second half of the Augustana game though, both teams went on runs, battling back and forth for who could control the lead.

When senior guard/forward Drew Bryson was called for a foul with 2:33 left on the clock and the ’Hawks down by four, chaos followed.

The Vikings were in a 1-and-1 situation and missed the free throw. The ’Hawks snatched the rebound and turned up court before the whistle blew.

After a lengthy discussion, the referees admitted to making a mistake with one referee thinking it was a two shot foul and blowing the play dead. Because of the mistake, the Vikings were awarded the ball,  since they had the possession arrow, to the angry protests of
UW-W fans.

Junior guard Dylan Sortillo hit the ensuing three-pointer, and Miller was given a technical foul for arguing with the referees on the way down the court. Orange split the pair, gifting the Vikings four points when it should have been the ’Hawks ball.

Miller said he was displeased with the officiating.

“They made a tremendous mistake,” Miller said. “Their responsibility is to get together to manage the game and to know if it’s a 1-and-1 or a two-shot foul. That’s basic officiating. They did not do that… At this level, when you put in this amount of work, this amount of time, when you have a locker room of guys crying that have put in tremendous work, and something like that happens in the final three minutes of an NCAA tournament game, it’s difficult for me to even comprehend that.”

Despite the fact that the official forgot how to do his job, the Warhawks were still able to go on a 8-0 run with 1:57 left, capped off by junior guard Chris Jones’ driving layup tying the game with 21 seconds left.

“I’m proud of how they battled,” Miller said. “That’s a tough sequence… It’s really a testament to their perseverance and their ability to fight through it.”

The Vikings got the ball, and Orange performed
his heroics.

In the Warhawks thrilling win from the night before, sophomore guard/forward Derek Rongstad scored 13 of his team and career-high 29 points consecutively late to mount a furious rally before junior guard Chris Jones was able to find Turner in the corner for the winner.

The ’Hawks lose senior forwards Alex Legault and Cole Van Schyndel, and Bryson to graduation, but with most of the core coming back next year, these ’Hawks could be a force to be reckoned with in the WIAC. Junior guard/forward Demetrius
Woodley agrees.

“This was my first time in the NCAA Tournament,” Woodley said. “It was a great experience for me. Me, Chris and Scotty get to come back next year. We really got a taste of what it’s like and what we got to do. It’s going to be a big summer for all
of us.” 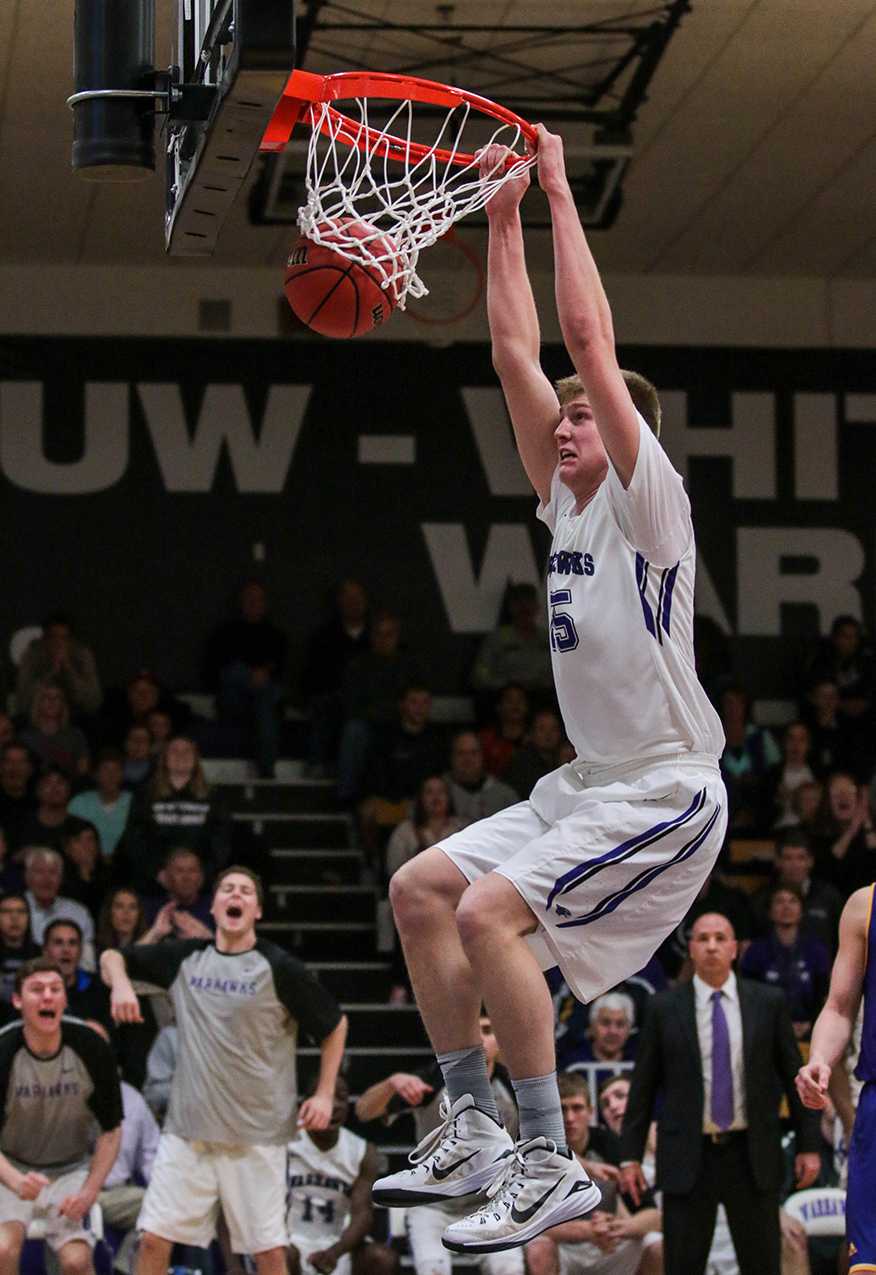