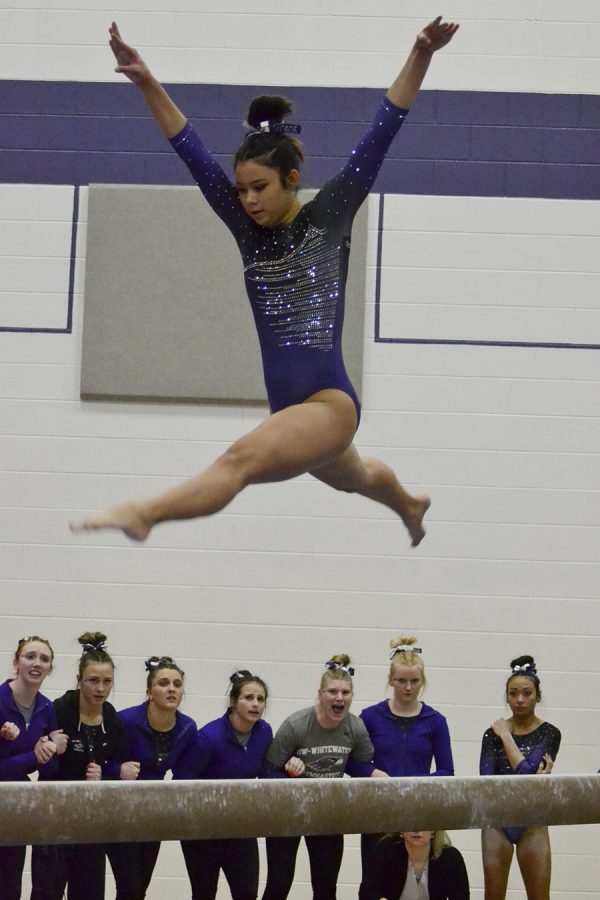 Sophomore Franchesca Hutton leaps in the air during her balance beam routine as her teammates cheer her on in the March 11 victory against Hamline University. Photo by Sierra High

The UW-Whitewater gymnastics team, 8-3, ended its three meet skid and celebrated senior night by edging out WIAC foe Hamline (Minnesota) by a final score of 192.125-188.850 on March 11 at Kris Russell Volleyball arena in Whitewater.  It was the Warhawks fifth consecutive score above 190 points to finish 5-1 in the WIAC.

The Warhawks have really begun to churn out the points in recent weeks with three of the programs highest point totals ever in the last 5 meets.

The Warhawks will surely look to continue this trend into the postseason and if they do they should experience a great amount
of success.

Seniors Kelsea Fischer, Katie Fiorilli, Mackenzie Smith, McKenzie Foster and Courtney Pickett were honored
before their last home meet and the seniors made sure to go out in style.

Fiorilli scored a 9.675 on the vault to take first place in the event. Fiorilli also tied for third place in the floor exercises and fourth place on the uneven parallel bars with scores of 9.675 and
9.625 respectively.

Pickett tied for third place on the balance beam with a score of 9.550 with sophomore teammate
Franchesca Hutton.

The Warhawks took all five spots on the uneven parallel bars. Junior Kate Mierow and sophomore Bailey Fitzpatrick took second and fifth in the event with scores of 9.675 and 9.575 respectively to fill out the top five along with Fiorilli, Smith and Foster.

O’Donnell was the only all-around competitor at the meet and finished with a score of 37.775.

The Warhawks move into postseason play with an average score of 191.3938 points per meet, the second highest average team score in the nation according to d3ncga.org.

The Warhawks closed out their regular season and role in the WIAC/NCGA West Regional Championship meet on the right foot. Despite going 1-3 in their last four meets they were right there in every loss this season with their largest margin of defeat being just 2.675 points. The Warhawks have one of the highest scoring teams in the country and have many athletes with a good chance to advance deep into the postseason.

The Warhawks head up to Winona, Minnesota for the WIAC/NCGA West Regional Championships on March 17.