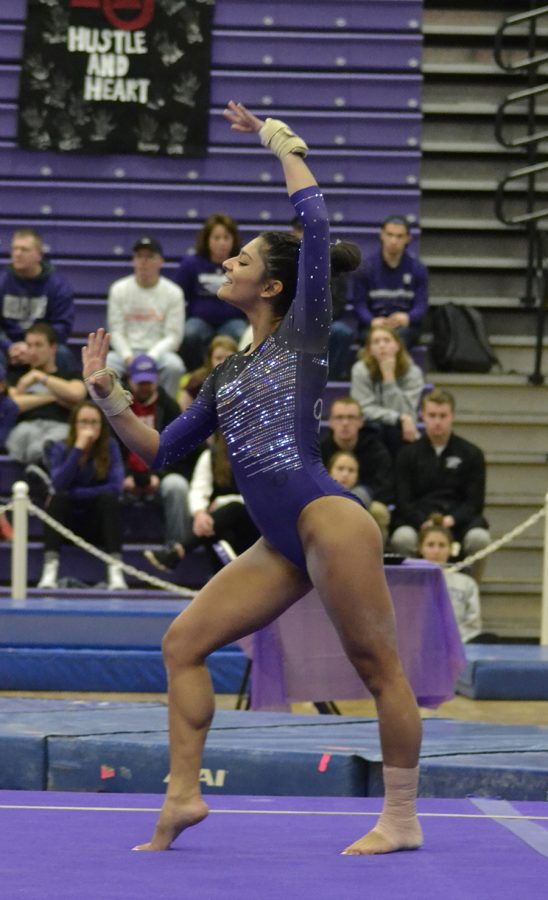 The UW-Whitewater gymnastics team traveled to UW-Stout the weekend of Friday, March 31 and and came back home soaring high as 2017 National Collegiate Gymnastics Association National Champions.

The team, who concluded the team championships on Friday with a total team score of 191.000, are now four-time National Champions. The most recent win prior to this year was in 2014, which came on the back end of the team’s three championships in a row starting in 2012.

“It was so exciting to be a part of,” head coach Jennifer Regan said. “This year’s championship was different than any of the ones in the past. These girls are very hard-working and fighters.”

Regan then elaborated on the differences between this year’s championship compared to their last one.

“When you haven’t had it in the past few years and the team has done so well,” Regan said. “Wejust weren’t able to finish it on beam the last two seasons.”

The ’Hawks began the team competition on Friday on the uneven bars,

coming away with a team score of 47.975. Leading the way was sophomore Lisa O’Donnell with an event-best and program record total of 9.725.

Senior Mackenzie Smith finished second with a score of 9.675, followed by junior McKenzie Foster who tied for third with a 9.600.

The next event for the ’Hawks was on the balance beam, which saw the team register their highest score of all the events with a total of 48.250. Foster took first with a score of 9.775, good for a program top 10 result. Three other Warhawks finished in the top 10 of the event, with senior Courtney Pickett tying for second with a score of 9.725, followed by sophomore Franchesca Hutton to tie for seventh (9.675) and O’Donnell tying for 10th.

“The things that have occurred in the past two years [previous performances in on the beam] are null and void at this point,” Regan said. “We overcame the obstacle.”

Fiorilli would then lead the flock of ’Hawks who helped the team register a total score of 47.225 on the vault. She finished first with a 9.550, followed by Pickett tying for sixth with a 9.450 and Evans along with freshman Lauren Marshall tying for eighth with matching scores of 9.425.

“I wasn’t really surprised [about the team national championship],” O’Donnell said. “We had put everything into the meet. I felt there was no way we could have lost.”

Regan said that prior to Friday’s meet, she had the team write a word on their wrists to look at for motivation and energy.

“What I’m hearing from other teams, coaches, parents and fans,” Regan said. “The energy the girls had, they were unstoppable.”

The ’Hawks would then send eight gymnasts to the NCGA Individual Finals the following day on Saturday.

O’Donnell, who is this year’s national champion in the all-around with a final score of 38.225 was also named the NCGA West Region Gymnast of the Year.

Fiorilli, who finished tied for third with 9.650 on the vault, was named this year’s NCGA Outstanding Senior and a first team All-American. She concludes her career tying for the most All-America honors in program history with 12, a number set by former Warhawk gymnast Katie Thompson.

Pickett finishes her collegiate career with 11 All-American honors, in addition to placing second in the floor exercise and 12th on the beam.

“This season was super successful,” Regan said, “but our biggest thing was just to enjoy the moment. This is the first championship that I really remember taking in each and every moment and enjoying it.”

The Warhawks’ success this season hasn’t gone unnoticed by former members of the student-athlete body, including former gymnast Steffi Heuer.

“I was in complete awe of what this team has achieved. These girls work so hard and I am so proud of the legacy they have left this year,” Heuer said. “They truly deserved the win considering all the injuries and tough practices they worked through to get to nationals!”

Heuer also had a special message for the team, some of which were her former teammates.

“I love you girls and loved watching you dominate this season,” Heuer said. “Congratulations, ’Hawks!”

Alumni support also was quite visible at the meet this past weekend, according to Regan.

“A ton of alumni traveled just to come and watch,” Regan said. “To see them want to be a part of this is huge.”

For returning gymnasts such as O’Donnell, the season ending in a national championship is no excuse for the team to rest on their success.

“We always want to progress and not stay the same,” O’Donnell said. “I know all season a lot of us were thinking of different ways we want to improve for next year. We’re always trying to build, we don’t stay stagnant at all.”

Regan’s praise for the team was never-ending.

“Just when you think it’s too much, they prove to you and say, ‘No no, that’s not happening’,” Regan said. “They have their own swag about them.”