UW-W bounces back with four wins 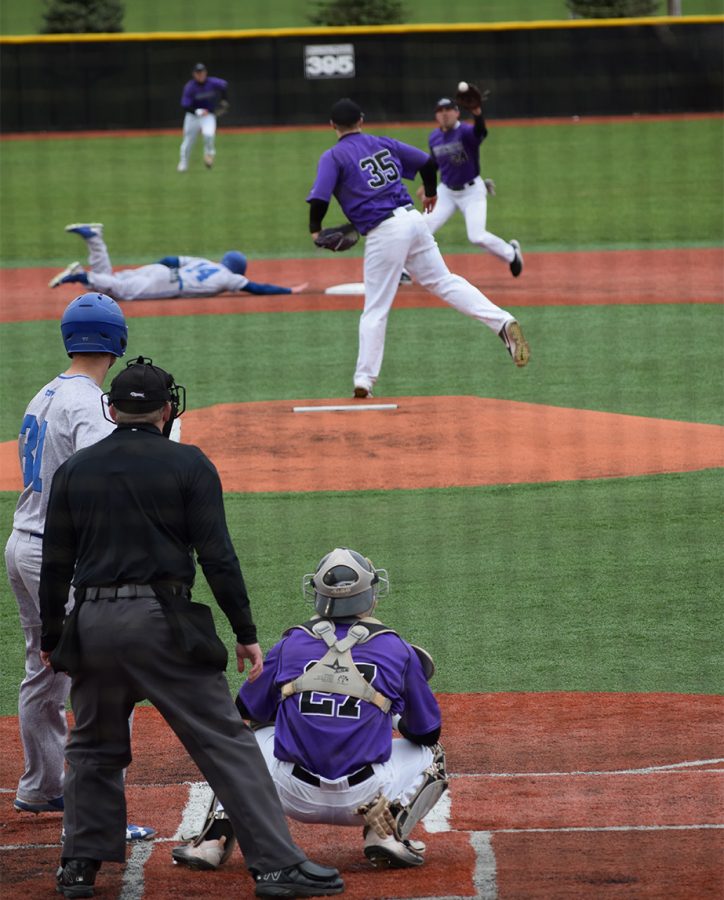 The No. 3 UW-Whitewater baseball team suffered its first loss in the month of April, falling against Concordia in a non-conference battle but bounced back for four straight.

The Warhawks (20-3 overall), were on the heels of a six-game winning streak, got roughed up before bouncing back, Big Sean style, in WIAC play. I’d appreciate if you read the rest of this whilst listening to Bounce Back by Big Sean. It would add to the mystique of the adventure you are about to go through.

Concordia (12-7) registered 20 hits in the game, I just did quick research and apparently this is not good if you root for the Warhawks. Concordia took an early lead with five runs in the top of the second inning before crushing the Warhawks 21-3. I’m sorry to have to report this.

But good things happened! Senior second baseman Steve Chamberlain finished with a tidy line of 2-for-3 with one run scored and two RBI’s to lead the Warhawks. Junior right fielder Ryan Makuski drove in Whitewater’s only other run.

The Warhawks bounced back (are you listening?) with a 4-game sweep of WIAC counter part UW-Stout (6-15).

UW-W started the series with a 11-1 whooping in the first game, which ended in just seven innings because of the ten-rule, which apparently exists past tee ball.

The Warhawks followed it up with another dominant 10-2 victory in the nightcap.

In the second game, Whitewater took a quick 1-0 lead in the top of the first scoring on a throwing error.

In the top of the fourth sophomore catcher Mike Aiello hit the ball and ran from the batter’s box to second base which is good and another person on base ran home, which was also good.

After the Blue Devils scored twice in the bottom of the sixth, then the Warhawks got those back plus another for good measure, to take the 10-2 lead.

Junior right-hander Heath Renz threw the baseball at the other team’s batters for seven innings, gave up only one earned run on five hits while sitting down six and extended his record to 4-0.

In the third game of the series, sophomore left fielder Matt Wary beat out out an infield single with one out in the top of the 10th to bring up junior first baseman Blake Fleischman, who blasted a two-run dinger down the left field line on the first pitch to give the Warhawks the 5-3 win.

This is the second week in a row you, the reader, have gotten to read about Fleischman hitting a game-winning homer. Shoutout to Fleischman for providing me with content and his team with W’s.

Junior Austin Jones picked up the win, scattering 10 hits while striking out six over 9 1/3 innings. Thats over a full baseball game! That’s a lot of throwing and catching.

After Stout took a 3-0 lead in the bottom of the second, Whitewater bounced back (there is a theme here) and got two back in the top of the fourth making it a one run contest.

The Warhawks tied the game at 3-3 in the top of the seventh on a two-out, RBI single up the middle by Wary. Sophomore third baseman Cal Aldridge, who walked (he actually jogged) and stole second with one out, then came around to score the game tying run.

Then Fleischman did his thing where he hits game-winning science experiments.

In the second game, the ’Hawks scored two in the seventh inning, tacked on three more in the eighth and broke the game open and pulled away.

Senior Westin Wuethrich allowed only one run on four hits while striking out nine over seven innings. Wuethrich improved to 3-0 on the year with the win.

Whitewater will pick back up again at 3 p.m. on Apr 22 to take on UW-Stevens-Point in Stevens Point.