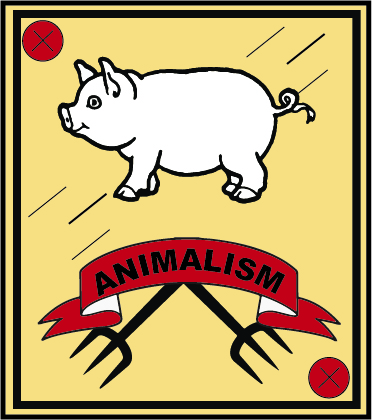 “Animal Farm” is a dirty tale that warns against the corruption of power and the savagery of human nature. The play put on by UW-Whitewater students who definitely did justice to the rawness of the messages and the filth of the environment.

The play started with a long, philosophical speech from one of the more influential animals on the farm, the Major. His dialogue resembled that of Martin Luther King Junior’s, “I have a Dream” speech. But the influence of his speech was somewhat unsettling to the audience because of the contrast between the almost poetic dialogue and the set, which had a giant mud pit in the middle.

The actors did an amazing job of portraying their true ‘animal nature’. It’s somewhat uncomfortable to see humans down on all fours rolling in a pit of mud acting out very human scenarios, but yelling and screaming like savage animals. The juxtaposition between the overall human themes of the story and the animal behavior were perfectly played out, and the actors didn’t shy away from behaving like absolute pigs.

The stage crew did not go overboard with elaborate props or costuming, instead the animals were all fitted with the same bottom up garment and shoes on their hands and feet to resemble hooves.

The stage was mostly blank except for a water trough, where many an unfortunate animal were drowned, and the mud pit, where the actors spent most of their time, like real pigs would.
The simplicity of the staging and props forced the audience to focus on what was really important – the intensity of the dialogue and the anxiety producing combat scenes. When one of the fight scenes started I was expecting a corny scene filled with fake punches and over exaggerated slapping sounds.

Instead, I was met with a combat scene that measured up to that of Medieval Times. There were battle cries and shrieks of pain as they threw each other into the mud pit and forced each others heads under water while actors shook and gurgled as they were drowned.

One scene nearly had me in tears; different animals were being killed off as traitors. One actor heaved a smaller ‘pig’ onto his back and ruthlessly shoved her face into the dirt and dragged her over to the water trough to drown her. The complete barbarity of this scene had me on the edge of my seat and ready to fight the brutal animals and save the innocent ones.
Even though the stage was kept open and the audience was only a few feet from the actors, they stayed very contained, almost like they were afraid to interact with the audience. When a stage is on the same level with the audience it is almost expected that the actors will at least approach the audience members, but the actors sometimes had trouble even making eye contact.
I don’t think every play should have audience interaction, but this one could have make an even bigger impression if they made more of a connection with the audience.

It’s rare that I find a play that has me forgetting the difference between the story and actual reality. The fact that the actors were so uncensored in their actions made the play one of the most unsettling and memorable plays I have seen yet.