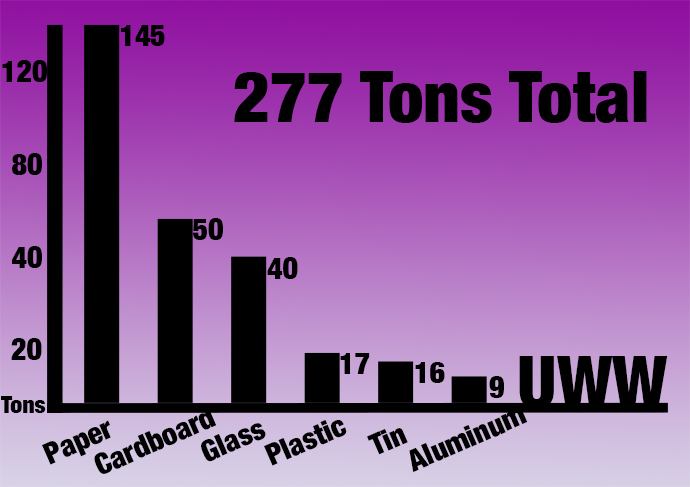 This bar graph shows the recyclable items that UW-Whitewater students recycle the most. Paper is the most recycled item.

University of Wisconsin-Whitewater students’ positive attitude towards recycling efforts does not appear to line up with behavioral intent regarding waste products, a public opinion course survey has found.

A number of UW-Whitewater students and community members responded to a recent survey regarding local recycling attitudes and habits. About 82 percent of respondents said they feel recycling is important, however, fewer than 50 percent choose to recycle.

In 2013, UW-Whitewater recycled approximately 32 percent of all waste products. In 2016, that number fell to about 25 percent, with just over 277 tons of waste having been recycled.

In that same year, about 855 tons of garbage was collected and placed in a landfill. According to data provided by Wesley Enterline, UW-W Sustainability Coordinator, it costs $30 per ton to place garbage into a landfill. This averages out to an annual landfill tipping cost of $25,000 for UW-W.

The survey data suggests that recycling higher percentages of waste would decrease the overall costs of waste removal for UW-W. 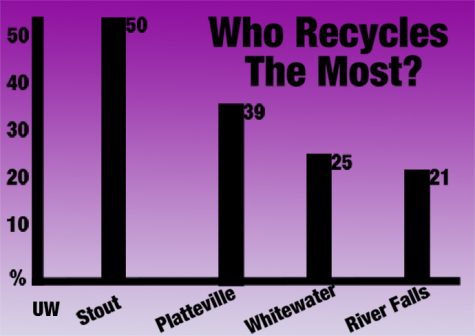 Around 47 percent of respondents said they were not aware of RecycleMania, a nationwide competition that challenges universities to recycle the highest percentage of waste as possible.

Within the UW-System, UW-W ranks third in terms of recycling, trailing far behind UW-Stout and UW-Platteville, while holding a slight lead on UW-River Falls.

A full list of the data compiled in the survey can be found below:

Residence hall garbage is picked-up Monday, Wednesday, Friday and Saturday.
Garbage from academic buildings are collected 3-4 times a week. The UC and dining halls are collected Monday through Friday, everyday.

Of all waste produced by the University of Wisconsin-Whitewater, about 24 percent of it goes into recycling.

What can be recycled:

Campus does have a policy regarding the disposal of hazardous waste. The campus has contracted with specific contractors for the proper disposal of this waste.

There is a drop-off point for electronic waste located next to Information Services in the University Center.
Small e-waste items can be dropped off at residence hall front desks for proper disposal as well.

Medications can be dropped off at special disposal points located in the Goodhue lobby and by the UW Credit Union in the basement of the UC. Jefferson and Walworth counties offers other ways to dispose of medication as well. Note, this does not include items such as syringes and needles.
Certain bathrooms around campus do have small sharps disposal containers.

Why focus on Sustainability?:

It is an important aspect to better the community and it yields a direct cost savings to the university by doing things such as recycling. The more trash there is, the more cost occurs, which in turn creates more taxes and tuition money.

Where is trash taken / cost of trash?:

Trash is landfilled at Mallard Ridge landfill near Delavan. It costs around $30 per ton to landfill trash and it is estimated that the university pays around $25,000 each year to do this. This cost can be reduced with more recycling and less going to landfills.

Where do recyclables go?:

Recyclables taken and processed by John’s disposal at a nearby facility where they become for sale on the open market.

Is there Tax Revenue gained from recycling?:

Recycling pays for certain reclaimed materials, but they wouldn’t want to engage in on site recycling themselves because there is a significant overhead to handle the waste stream. Basically, profit in this situation is cost avoidance.  If recycling is more profitable for the waste hauler, it will keep the costs they pass onto the university lower.

Has/is considering multi-stream recycling stations for in academic buildings. Funding limits the possibility of “wholesale change”
Wants to work with A’viands to address food waste. One such thing is composting.

What is Recyclemania and how did it get started?:

RecylceMania is a non-profit organization that is made up by a board of directors and also sustainability managers from universities all across the country. It started in 2001 between two universities from Miami and Ohio. The task was to see who could recycle the most in a 10 week period. Ever since the beginning of RecycleMania, more and more schools have joined and it has been growing every year. Recyclemania has gained corporate sponsors such as The Coca Cola Company, SCA Tissue, Alcoa Foundation and the American Forest and Paper Association.