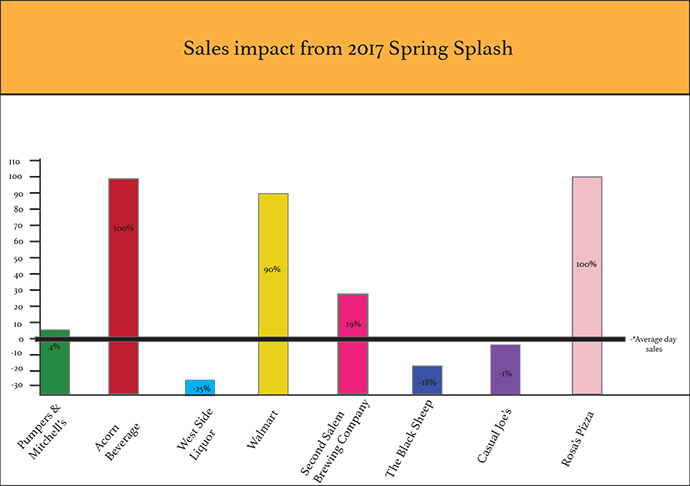 This graphic shows how some local businesses were impacted by several events over this past weekend, including Spring Splash, State Solo & Ensemble and several sporting events.

Rainy weather and every student residence being on lockdown did not deter an economic boost for some local businesses.

This wasn’t the first time, either.

The Royal Purple spoke with multiple business owners and employees about the economic impact of this year’s Spring Splash weekend.

While some of these individuals’ opinions differed on whether the past weekend’s economic impact was due to Spring Splash, several local businesses concur that they saw increased sales as a result of having more visitors than a usual weekend in Whitewater on Saturday. Some stores, however, managed to pull in record sales.

“Having lackluster weather in comparison last year’s event – along with not having a centralized location in the downtown area – did seem to cause less foot traffic to small ‘Triangle’ businesses during the day,” Patrick said.

Patrick and Wisconsin Red Founder Steve Farina are former sponsors of Spring Splash. They both revoked their sponsorship in February following a meeting with the City of Whitewater, which has said the 2016 Spring Splash event led to increased litter and crime in the community. The City of Whitewater alleged that the majority of people committing crimes were non UW-Whitewater students. A Royal Purple investigation found that 40 percent of people charged with crimes were in fact UW-Whitewater students.

“It was really nice to see students and event goers alike showing more respect for the community and their neighbors,” Patrick said. “I commend everyone for doing so.”

“I can’t thank my staff enough for all their hard work & sacrifice,” Patrick said. “Splash on, Whitewater!”

“If it was nice out, more of our regulars would have come in and bought more,” manager Jordan Czarpata said. “But the rain didn’t stop people from going out for Spring Splash at all.”

With the on-campus residence halls closed to non-students during this past weekend, many attendees of Spring Splash resorted to buying a hotel room on Saturday night.

In comparison to the weekend of April 16, 2016, Second Salem Brewing Company pulled in even amount of sales on Saturday and saw a decrease of 35 percent on Sunday.

Stacking up to a typical weekend, Christon reported an average increase of about 29 percent between Saturday and Sunday.

“Now, while I feel that Sunday’s numbers are a result of Spring Splash, I feel that it had little to no affect on us this Saturday,” Christon said. “We had few, if any, drunk college kids in for business – unlike last year.”

Christon attributed the difference in the number of Spring Splash attendees visiting his business to the weather.

“It was cold and raining, and whatever kids came to town stayed in location and did not move around much during the day,” Christon said.

But because of the State Solo & Ensemble, he added, “We had a large lunch push of parents and their kids.

The Black Sheep, 210 W. Whitewater St., was slower by 18 percent than all the other Saturdays in April, and the restaurant’s sales were down 16 percent in comparison to the same weekend in 2016, owner Tyler Sailsbery said.

Sailsbery, who also owns Casual Joe’s, 319 W. James St., said that Casual Joe’s “was within a few dollars of the average for all the Saturdays in April and down a tiny bit from last year’s spring splash weekend.”

Ken Dahnert, owner of Rocky Rococo’s, 1210 W. Whitewater St., said his restaurant saw an increase in sales over the weekend, but he added that “it had nothing to do with Spring Splash.”

“It’s impossible to compare apples to apples,” Dahnert said. “It’s hard to compare the numbers, because it was on a different weekend than last year.”

Dahnert said the rainy weather diluted some students from stopping in, but the other events going on over the weekend brought in plenty more customers instead.

Rosa’s Pizza, 180 W. Main St., also saw an increase in sales over the weekend. The restaurant pulled in approximately double the typical amount of sales, which was slower than last year but still very busy, a manager told The Royal Purple.

But Reichwald did not attribute the significant increase in sales to Spring Splash.

“We polled many of our customers, and most of them were in town for the State Solo & Ensemble, not Spring Splash,” Reichwald said. 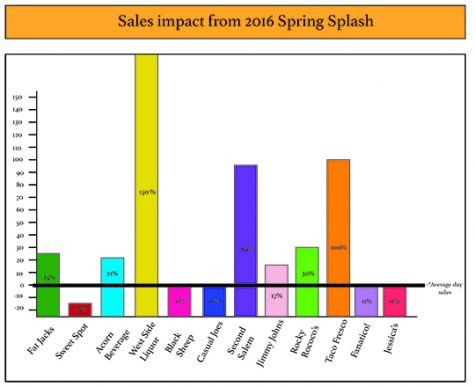 This chart represents the impact that last year’s Spring Splash had on local businesses’ sales.