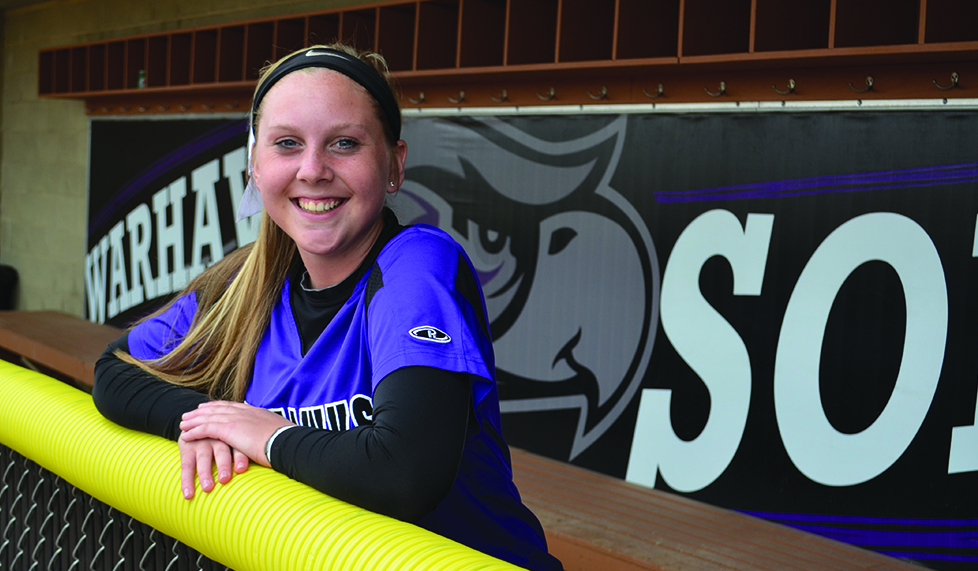 Freshman softball pitcher Bella Matthias is all smiles in the Warhawk dugout and on the mound after being near the WIAC lead in every pitching category. Photo by Sierra High

Adjusting to the next level is one of the toughest things to do in sports. Countless athletes have been chewed up and swallowed because they weren’t able to perform.
It’s tough enough to be able to perform at the next level for any team. It’s even tougher to make an immediate impact. It’s very seldom that a freshman or rookie will have a prominent role on any team, unless that player is being recruited by John Calipari to play basketball for the Kentucky Wildcats.
Freshman Warhawk softball pitcher Bella Matthias is doing her best impersonation of a
Kentucky Wildcat.
She has skipped the “getting her feet wet” stage and has leaped right off the high dive, cannon-balling into the deep end of the pool.
Matthias has been one of the key pieces for the ’Hawks this
entire season.
“I practiced pitching all the time in high school, and took practice very seriously,” Matthias said. “I always wanted to get better everyday, and having success in high school has really helped my confidence here when I pitch for Whitewater.”
Before Matthias was a pitcher for the ’Hawks she was a standout pitcher at Greenfield High School. In her tenure at Greenfield, she accumulated a list of awards that would make the New York Yankees trophy case blush.
While in high school, Bella was a three-time first-team all-division and all-conference selection, a three-time all-state honoree, a two-time NOW Newspapers player of the year, a three-time first team Milwaukee Journal Sentinel All-Area selection and a Woodland Conference player of the year.
With all of her success in high school, Matthias had a lot of interests from teams at the next level.
“I wanted to start right away,” Matthias said. “Not only did I want to start right away, but I wanted to stay close to home. So it ultimately came down between Winona State and Whitewater.”
Matthias ultimately decided to come to UW-Whitewater because it was closer to her home in Greenfield, because she had a good chance to start, and because they were a competitive program.
“I really liked everybody at Whitewater when I met the team and coaches at the camps,” Matthias said. “What really stood out to me was that everybody here was about winning, and winning was important to me, and I ended up falling in love with the program.”
Matthias currently is leading the ’Hawks in every possible
pitching statistic.
She has posted a 9-3 record, with 75 strikeouts in 82.2 innings pitched, including eight complete games. Her nine wins are tied for the most in the WIAC, and her 82.2 innings pitched are the second most in the conference. She has also posted a WIAC leading ERA of 1.52.
“I knew that my location was going to be really important when getting to the next level,” Matthias said. “A key to my early success has been that I throw hard, but in order to have consistent success the most important thing has been my accuracy and being able to hit my spots.”
If Matthias continues to hit her spots, she will hope to continue mowing down batters for many years to come for the UW-W softball team.
WIAC opponents beware.