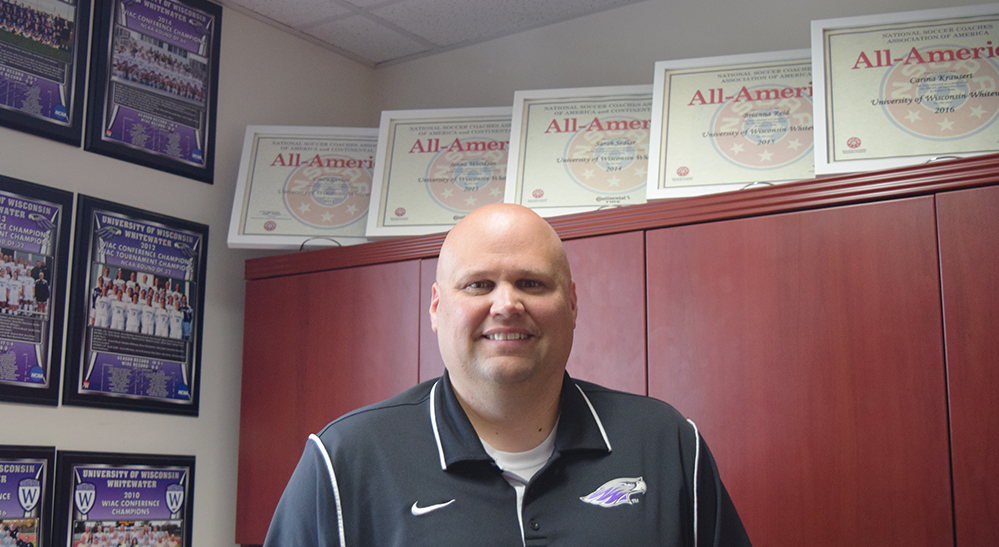 After leading the UW-Whitewater women’s soccer team to a school record 21 straight victories, hosting games in the first and second weekends of the NCAA Tournament for the first time in school history and countless other accomplishments, the Royal Purple sports staff has nominated head coach Ryan Quamme as its coach of the year.
National championship-winning gymnastics coach Jennifer Regan finished second, while men’s basketball coach Pat Miller took third in the sports staff voting process.
Quamme is 91-16-5 in his five-year coaching career good for a .835 winning percentage and has led the Warhawks to more victories in each of his five years at the helm of the program but isn’t done there.
“We feel we haven’t reached our ultimate goal yet of winning a national championship,” Quamme said. “Every year our culture helps us keep raising the bar. We have been very fortunate, but we have set the bar pretty high so it will be pretty hard to keep it going.”
Quamme began his soccer career at age five where he played all the way through high school. His career as a goalkeeper could have continued as he had some Division-III school offers, but he decided to begin coaching the U13 and U14 boy’s teams for the Verona Area Soccer Club while going to college instead.
It’s where his 20-year coaching career began that Quamme still loves to this day.
“I am very lucky to be able to do this for a living and continue a sport that was very good to me growing up and continues to be good to me,” Quamme said. “It’s also a way that I can give back to the game a
little bit.”
Quamme worked for the Middleton Yahara Soccer Club coaching many different age groups and teams, including varsity girls’ soccer coach at Madison East High School for two years in 2003-04 and Middleton High School in 2010.
In 2007, Quamme was hired as the lead assistant coach for both the men’s and women’s soccer teams under head soccer coach Greg Henschel, who Quamme considers his mentor. Quamme stayed in that position for four years before being promoted to the head women’s soccer coach prior to the 2012 season.
“The hardest thing during the transition process was leaving the men’s program because I had a great four years with the program,” Quamme said. “Knowing the university, knowing the commitment to athletics, knowing the expectations with the athletic department, this can be a hard place to come into if you are an outsider. I think being an assistant was very rewarding because I didn’t feel intimidated by the success of the football and men’s basketball and all the other programs here.”
Quamme has led the women’s program to four regular season WIAC titles, four WIAC tournament titles and a trip to the NCAA tournament every year in his tenure.
Describing his coaching style as “a professor to a classroom,” Quamme and his staff pride themselves on making sure his players are taught everything they need to be prepared, organized and successful. He said he implements a lot of technology through video and analytics to further help his team succeed, but still wants to make sure he and his assistants are very accessible as a player’s coach.
Graduating senior forward Brianna Reid agrees with his assessment.
“For me, it was easy to talk to Coach Quamme on and off the field, probably because I was a captain but, because we were able to develop that kind of coach-player relationship where I felt comfortable enough talking to him,” Reid said. “Meetings with him were scary as a freshman, as most beginning players will say, but he makes sure that each player is performing well on and off the field which is a great quality in a coach.”
Under Quamme’s command, the Warhawks have had 30 All-WIAC players, 19 All-Region players, five All-Americans (although Reid was named an All-American her junior and senior year) and multiple scholar athlete recipients.
Reid said that Quamme was a part of her successful career at UW-W.
“Coach Quamme helped push myself to becoming the player I am and saw my potential the moment I started preseason in 2013,” Reid said. “He believed in me and my abilities and was a supportive coach throughout my career.”
Reid and Quamme both greatly enjoyed last year’s record-breaking season, which Quamme said was even more remarkable with how the team didn’t sit back and enjoy until after the season was over. He said he was most impressed with how the team didn’t look far ahead on the schedule and believes it will be extremely hard to replicate again.
Next year’s team will be different for Quamme with no Reid, Carina Krausert, and Carly Pottle, but Quamme said he is up for the challenge.
“We have a little bit of a younger team with some new people stepping up,” Quamme said. “It will make this fall enjoyable in its
own way.”