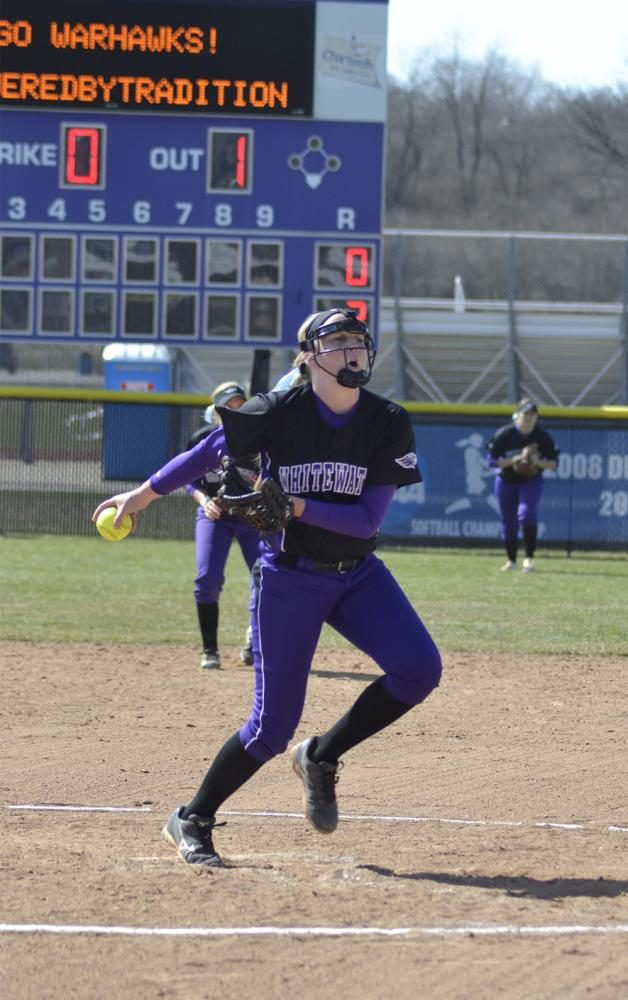 Freshman pitcher Bella Matthias winds up for a pitch in a game earlier this year. Matthias threw her second no-hitter of the season in the 8-0 vs. the UW-Stout Blue Devils on April 29. Photo by Sierra High

The UW-Whitewater softball team won the program’s 11th WIAC regular season championship and the third in the last four years.
The nation’s No. 13 ranked team took all four games to finish the conference season perfect, becoming the first team to do so since 2010.
The Warhawks went on the road for back to back doubleheaders, starting first with UW-River Falls. That actually turned out to be the better place to play, at least weather wise.
“The weather was actually pretty decent up in River Falls,” head coach Brenda Volk said. “Sun was out, not much wind, great
for softball.”
Whitewater downed the Falcons (11-22) 8-0 in the opener before soaring by River Falls 11-1 in the second game. Both games were called due to the run rule after just five innings.
In the first game, freshman pitcher Bella Matthias threw her eighth shutout of the season. Going all five innings, she struck out nine, only giving up two hits.
Sophomore shortstop Kelly Berglund led the bats posting two hits, including a home run and three runs batted in.
“Our hitting has been very balanced up and down the line up, and we are getting contributions from everyone,” Volk said.
Senior first baseman Amy Ricci and sophomore centerfielder Caitlin Catino each collected two hits themselves to help the Warhawks fly past the Falcons.
The Warhawks continued the scoring barrage in the nightcap, recording eight runs in the first inning and three more in the second to soar to their 12th straight conference victory.
Julia Camardo (9-2) only allowed one run and racked up seven strikeouts over four innings to earn the win. Freshman Kylie Hoffman came into ice the contest pitching a 1-2-3 final frame.
Freshman third baseman Meg Cohrs, senior right fielder Haley Morelli and junior left fielder Mallory Klotz all homered to keep the offense flying. Klotz and Cohrs finished with three RBI apiece, and Morelli plated two.
The Warhawks completed the regular season with two victories at UW-Stout on April 29in a doubleheader in Menomonie.
The Warhawks downed the Blue Devils 8-0 in five innings in the opener before swooping in for a 6-1 victory in the second game.
Matthias pitching performance was the highlight of the day by tossing her second no-hitter of the season in the first game.
“I worked very hard during the off-season on my location and incorporating my changeup in my repertoire of pitches which I think transferred over to success this season,” Matthias said.
This was Matthias’ ninth shutout of the season and the Warhawks’ 18th no-hitter in program history.
Whitewater scored seven runs in the top of the fifth inning to break the game open behind Klotz who collected three hits, including two doubles, and knocked in one run.
In the last game of the weekend, the Warhawks scored three in the first frame on a two-run double by Ricci and a sacrifice fly by Swanson. They then added three more in the third to open up the contest.
Camardo scattered seven hits and struck out five Blue Devils which brings her record to 10-2 for the season, allowing only one run in the bottom of the fifth.
“By ending the regular season with a 10 game winning streak, I think our momentum going forward into the WIAC Tournament is very strong,” Matthias said. “We have high expectations for the rest of our season.”
UW-Whitewater opens WIAC Tournament play at 2 p.m. May 5, at van Steenderen Softball Complex against the winner of the game between the Nos. 4 and 5 seeds.