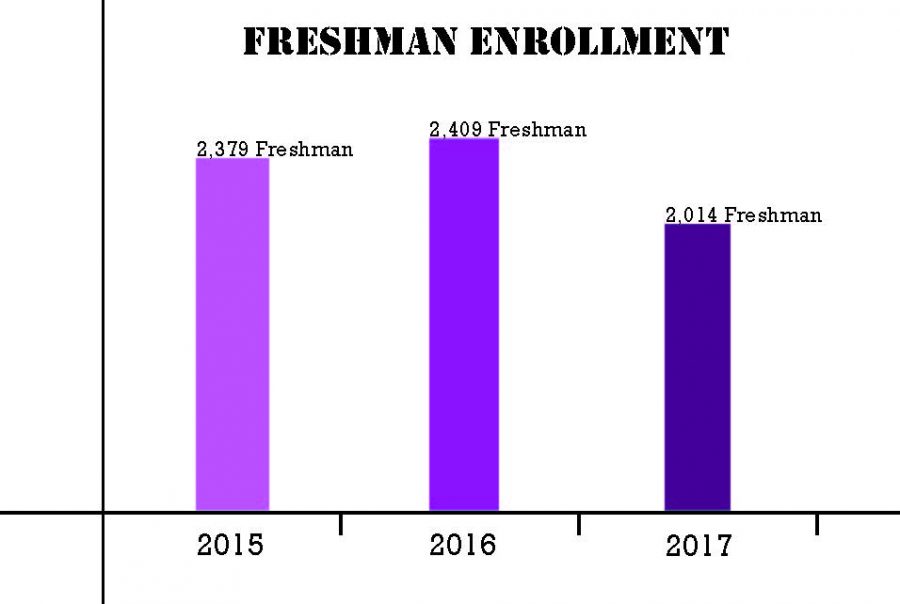 Preliminary numbers for Fall 2017 semester were released on the 10th day of classes, showed a total drop of 262, with 12,366 total enrolled students.

“Until this fall, UW-Whitewater experienced record enrollment seven out of the past eight years. This trend continues,” Chancellor Beverly Kopper said in a statement to the Royal Purple. “We’re taking steps to make sure that next year we continue to see growth in enrollment.  Provost Susan Elrod and Assistant Vice Chancellor Matt Aschenbrener are assessing our recruitment.”

Of the 2,197 freshmen, 829 are first generation college students, and 236 are underrepresented minorities, according to 2017 preliminary numbers.

There was a total of 720 transfer students in fall of 2017, 332 of them being first generation students.

A majority of students who attend the university are Wisconsin residents, with 9,271 students being from the state, which makes up about 83.6 percent of the university population.

Illinois is the other top represented state, with 1,519 students from Illinois, making up 13.7 percent of total students.

Minnesota is the third highest represented surrounding state, with 66 students attending from Minnesota, which makes up .6 percent of the total student population.

One hundred non-domestic or international students make up one percent of the population at the university.

The university is working on accessing how students are recruited, the first change  made is creating a new website. Rolling out on Oct. 16 the website homepage was redesigned to attract the attention of high school junior and seniors.

According to a statement from Kopper, studies show that 80 percent of prospective students believe that a university’s website is a top source for receiving information about the school.

“We updated our homepage to now focus on the recruitment of students. We know our website is vital to this process,” Kopper said in an email statement to the Royal Purple. “Knowing that, the homepage has been redesigned to focus on answering prospective students’ most pressing questions.”

“This decision comes at a time when UW campuses are managing enrollment and financial challenges,” Cross said in a system-wide email.

If the proposal is voted in, students currently enrolled at UW-Rock County will become a part of the enrolled population at UW-Whitewater.

“What that means for future semesters remains a question,” Kopper said in a statement.