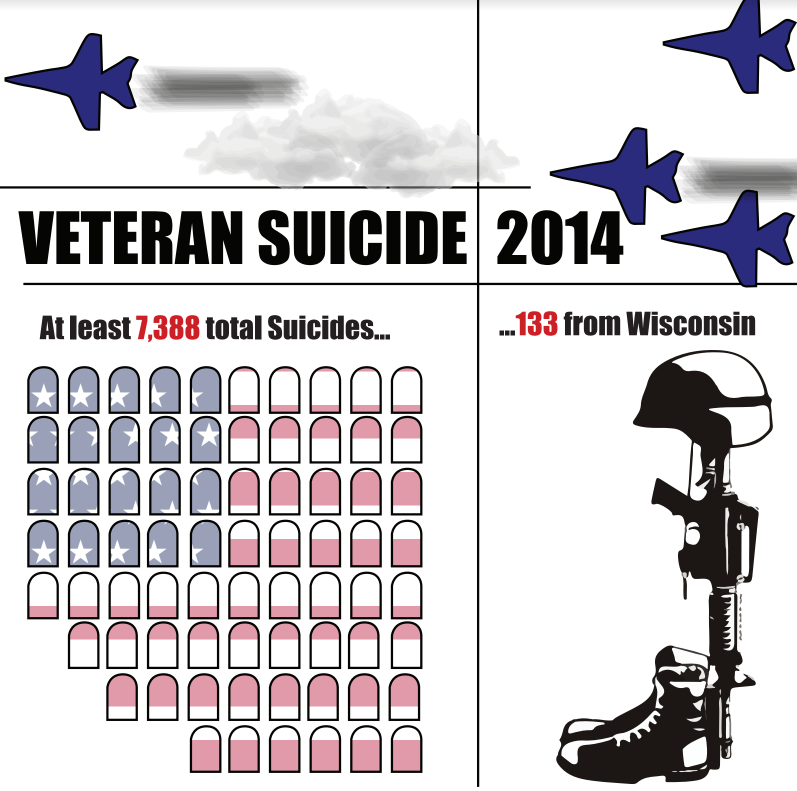 In response, the Wisconsin Department of Veterans Affairs (WDVA) created the Zero Veteran Suicide Initiative to combat the issue.

The initiative is aimed at educating people about ways of preventing suicide by using Question, Persuade & Refer (QPR) training. A QPR workshop was held in the University Center Nov. 9 with the goal of training veterans and community members to prevent future suicide attempts.

WDVA Outreach Specialist Lonergan said he experienced his first instance of assisting a veteran who was attempting to commit suicide on his first day at work. “At 11 o’clock, I get a call on my work phone,” Lonergan said. “I had one of my veterans in my program try killing himself. He hung himself, slit his wrists and put a plastic bag over his head. All three.”

But the man on the other end of the phone survived.

“He lived,” Lonergan said. “He is doing well for the most part, but that was the first day. I didn’t know how to handle it. I didn’t know what to do.”

QPR training has since helped Lonergan to evolve. He is now better equipped with the tools and knowledge to help veterans at risk.

“The biggest thing you can take from anything is listening to a person,” Lonergan said.

“God gave you two ears and one mouth. That means you need to listen twice as much as you talk.”

Lonergan said he believes listening to veterans will “let you know the problems and the solutions, because some veterans are legitimately hurting and need help.”

The analysis of veteran suicide rates in the U.S. conducted by the VA examined more than 55 million records from 1979 to 2014 in all 50 states. The resulting report was released in 2016 and it shows the unsettling upward trend of veteran suicide.

The report does not examine the possible causes of suicidal behavior, but Lori Kirchgatter, Veterans Outreach and Recovery Program Manager, ties it closely to feelings of lost hope.

“Many veterans are returning to the United States with chronic pain, sexual assault or other traumas,” Kirchgatter said.

Intervention by using the QPR method allows someone to ask questions and get someone the help they may need. It serves as a guide to approaching someone at risk and talking with them openly.

“It applies to anyone. It’s just a way for us to learn ways to offer hope to individuals who may be having suicidal thoughts,” Kirchgatter said.

“Again, it’s all about hope,” she added. “Breaking the chain in hopelessness leads to prevention.”

For more information on the Veteran Outreach and Recovery Program or QPR, visit their website at dva.state.wi.us.