Jazzing up the holidays with UW-W Jazz Band 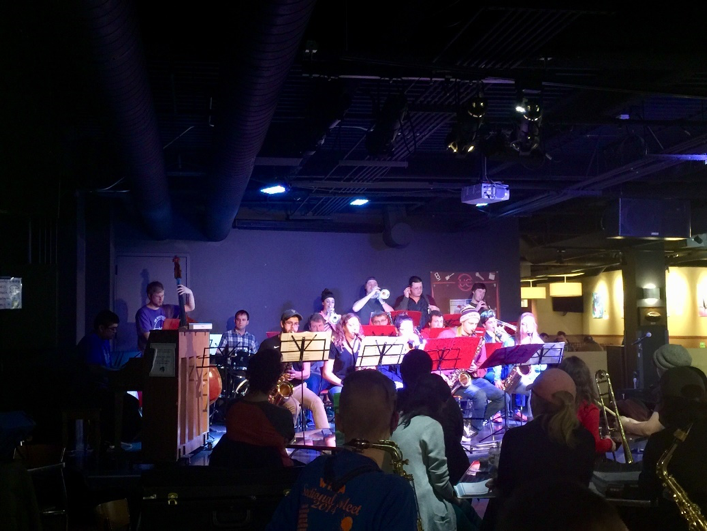 There is a certain vibe most people get from the holiday season, that time period between November and January. It is chaos: a calamity of love, panic, holiday cheer, for some a reminder of loss, all rolled into a gift-wrapped box we take out again every year.

Jazz is similar, chaotic and uncontrolled by its very nature, but somehow, when you put it all together, music, and emotion, still finds a way to come out of the woodwork, sometimes in ways we may not expect. This is exactly what happened on the evening of Wednesday, Dec. 6 as the UW-W Jazz band took the stage in the UC Down Under for Reading Band.

Reading Band is similar to an open-mic, where musicians can bring their instruments and read from pieces of music to play together. The main difference is that, in the case of this open mic, no one knows what they are playing ahead of time.

The band opened the night with some prepared pieces before opening up the stage, and from the outset, there was a jazzed-up spirit in the UC. The band opened with a rendition of the classic, Rudolph the Red Nosed Reindeer, followed by a selection of pieces inspired by 1920s’ swing and jazz greats.

Students also brought some winter blues to the stage, while others were inspired by the holiday spirit, adding in their own musical compiliations and creative works to Christmas classics.

Reading Band provided both an outlet and inspiration for musicians during this often emotion-laden time of year.