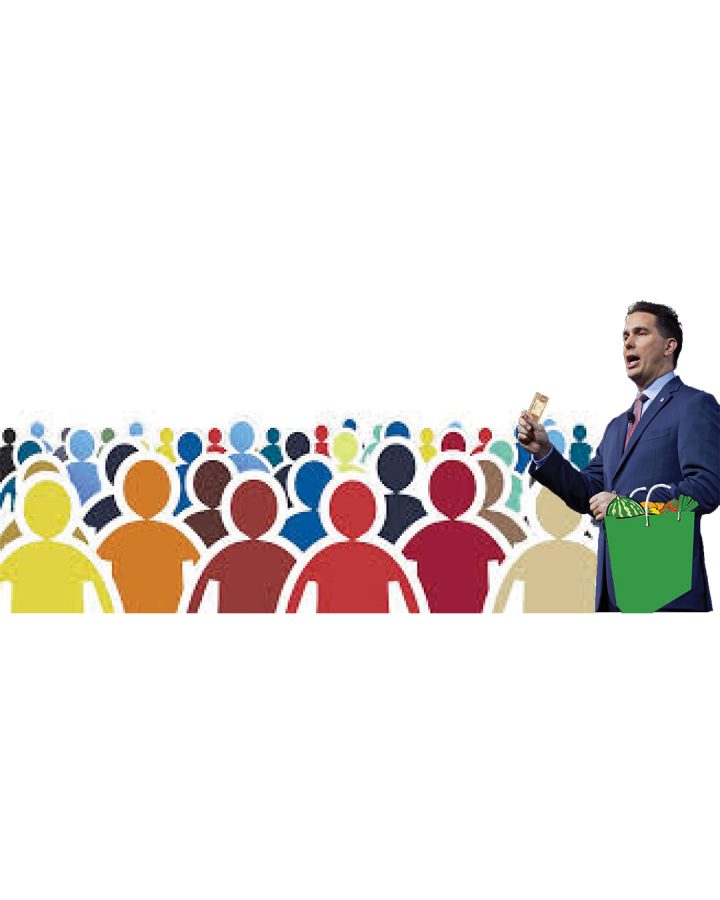 Wisconsin is turning into a food fight for lower income families, and Gov. Scott Walker wants it that way.

Walker recently called a special session of the Wisconsin State Legislature on Thursday to make changes to programs utilized by low-income households. The bills, authored by Assembly Speaker Robin Vos (R-Rochester) and Sen. Chris Kapenga (R-Delafield), would add limitations on eligibility requirements for programs that assist the poor.

The two we think are the most damaging to Wisconsin residents: increasing the required number of work hours to receive food stamp benefits for both individuals and families, and compulsory, nonnegotiable drug testing of individuals who live in subsidized housing, among others.

Here at The Royal Purple, we’re all for having our citizens working and stimulating our economy. There’s also an opioid epidemic that needs to be addressed – The Isthmus reported last week that in rural Wisconsin, the state has become so overwhelmed with drug cases that we’re facing a constitutional crisis, as there aren’t enough lawyers to ensure that everyone receives a fair trial, along with the fact that the nationwide opioid crisis has single handedly dropped our average life expectancy.

We agree with Walker that “we need everyone in the game.” However, to play hardball with people, who are already suffering from poverty, and force them to expose their entire lives as solutions to these problems, is not a sustainable solution for Wisconsin residents.

We need a bipartisan effort in the Wisconsin State Legislature that provides better job opportunities to lift people out of poverty, not waste time on laws that put up barriers to upward economic mobility.

You can’t be in the game if you can’t afford a ball to play with.

One in nine Wisconsin residents live with hunger in some capacity, that number even higher for children, as one in six do not have enough food, The Fitchburg Star reported in August 2017. The meal gap in southern Wisconsin, or the number of meals short than what are needed, is at a staggering 25 million a year.

Lest we forget that a significant number of high-rise apartments are going up in the city, as homelessness is rising. Federally subsidized housing, known as Section 8 from the federal Housing and Urban Development department, is not always accepted by landlords, despite that they’re legally obligated to.

Based on the information that has been collected, we can see that hunger and housing are challenges for Wisconsin residents. Further restricting access to assistance for food and healthcare does the exact opposite of what it’s intended – it doesn’t put people in better financial situations.

Instead, it penalizes you for working a part-time job. Sometimes, a part-time career is all you can afford, as a college student, a caretaker for an ill-family member or simply unable to afford a babysitter for your children.

Or, your employer is unwilling to provide you 30 hours of work a week because they don’t want the added requirements that come along with increasing your hours, such as paying for more employee hours or providing healthcare, as is required by the Affordable Care Act for every worker who racks up 30 hours or more a week.

Think of it this way: raising the required hours of work from 20 to 30 would make every student who works on the University of Wisconsin-Whitewater’s campus ineligible for food stamp benefits. Thanks to a provision in the ACA, students aren’t allowed to work more than an average of 30 hours a week, therefore dropping students to a maximum of 25 hours a week.

Children hurt under these bills most of all, because they have no say in how much their parents work. Do children really deserve to have a stream of food revenue cut off from them because their parents don’t receive enough hours at work? It’s inhumane and harms the most vulnerable.

And drug testing for housing? Not only does that negatively reinforce a stereotype of poor people, but it’s a waste of taxpayer dollars and is unreasonable search and seizure.

You could say, “well, we want to make sure that people who receive taxpayer dollars aren’t using it on drugs.

And while that might be a valid concern, it begs the question: why do only poor people need to prove they don’t abuse drugs to receive money from the government? We don’t remember having to mail in a urine sample when turning in our FAFSA applications. By this logic, you shouldn’t even be able to walk on the government-funded sidewalks or drive on the Interstate if you’ve ever used drugs, ever.

Nor do people who buy homes or sign leases for apartments that are unsubsidized have to submit to regular drug tests to continue to live there.

Let’s call it what it is: it’s a waste of taxpayer money that humiliates people who need public assistance by assuming they’re on drugs. The drug test is a confirmation of innocence, not guilt – and that’s not how our justice system is supposed to work.

Raising eligibility requirements past what is achievable by the population who relies on it and shaming poor people into unwarranted drug tests is not the path to better opportunities. Instead, it forces Wisconsin residents who are less fortunate work harder just so they can receive less.