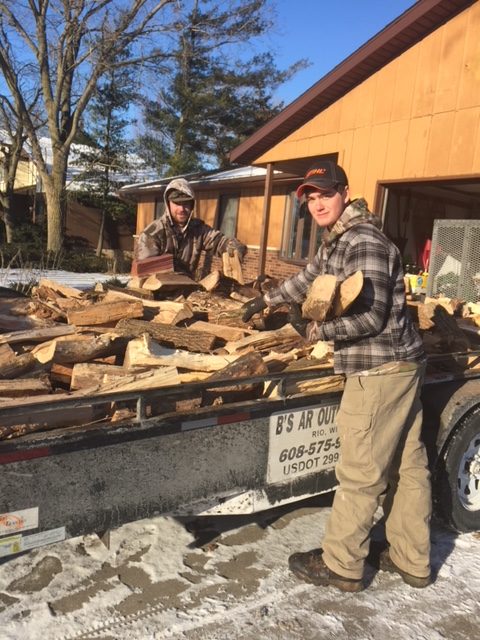 A University of Wisconsin-Whitewater student has blended business and friendship as a means of helping to pay for his college education.

Sophomore Michael Raemisch and longtime friend Brady Reigstad co-own Firewood Outdoors, a business they launched together in December 2017 after several people they knew asked to buy a surplus of firewood from them during winter break.

“We were just kind of chopping up wood and trying to figure out what to do with it,” Raemisch said. “A bunch of family and friends wanted some [firewood], so we started a small business out of it.”

Raemisch is majoring in business, and runs a landscaping business with Reigstad during the summer of each year. The lifelong friends’ business partnership extends into their everyday lives, in which they hang out often, whether they’re delivering wood or going hunting, Raemisch said.

“There’s never been a trust issue with money,” Raemisch said. “It’s always 50-50, and we’re always honest with each other.”

Originally, their business was run solely through customer pick up orders, but after several customers in Madison called to request delivery services because they were unable to make the drive on their own, the co-owners decided to offer firewood delivery for customers. They pile the wood into a trailer hitched onto a 2001 Chevy truck and venture out to make deliveries. For larger loads, they often call upon other friends to come help out for an afternoon and share the profits.

“We get to travel around and see everything in the area, all the backroads,” Raemisch said. “It’s cool to drive around in good company. We meet new people all the time and help them out.”

Reigstad’s sister, Amber Anderson, was one of Firewood Outdoors’ first customers. Many of their extended family members are entrepreneurs with experience running their own self-employed businesses, Anderson said.

Anderson said she thinks Firewood Outdoors stands out among others selling firewood in the area because the wood was completely dry, making it a better product and easier to use to fuel fires.

“They’re prompt and good people,” Anderson said. “It was a quick delivery, and everything was stacked and placed where we had asked. I’d recommend it as a service.”

Some obstacles can get in the way of making deliveries, such as ice making roads impassable or frigid weathers causing car issues. Despite occasional delays, the business has been running smoothly, Raemisch said.

Although running their business requires manual labor, Raemisch said it isn’t hard to find enjoyment while on the job.

“Splitting up the wood and stacking it is hard work, but riding around with good friends makes it fun,” Raemisch said.

Raemisch also stated that he and Reigstad plan to continue selling firewood on weekends, or at least “until it stops being cold and people stop wanting firewood.”