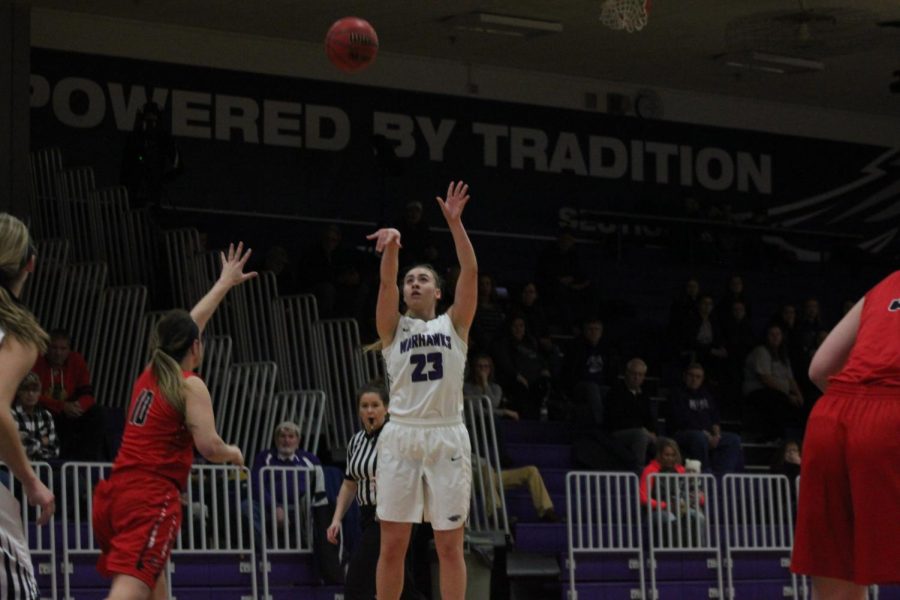 Senior guard Brooke Trewyn scored a career-high 31 points to propel the Warhawks to a 83-72 victory over the UW-River Falls Falcons Feb.10 at Kachel Gymnasium.

River Falls dominated the UW-W on shooting percentage in the first half, outshooting the Warhawks by 12.8 percent, yet UW-W still lead 44-42 at the break. The score was partially due to the ’Hawks putting up 12 more shots in the first half than the Falcons. These shots came off of 12 Warhawk offensive rebounds, as opposed to one for River Falls.

Towards the end of the game, the Falcons’ shots were not falling as much as they were in the first half, giving UW-W multiple chances to capitalize and take control.

“You saw us press a little bit when we could when we weren’t in foul trouble,” head coach Keri Carollo said. “We tried to keep the pace of the game as fast as possible so that we could then try to wear them out and hope that their shots would fall short here and there.”

“We knew coming in that their offense revolves around Brynn and (Taylor) Karge and that those two people needed to be stopped in order to stop the team,” Conley said. “Me and Malia both collectively did our best to stop Brynn.”

On the offensive end, Trewyn carried the load.

“Our coach just said if you’re feeling it and shots are open just take them,” Trewyn said. “I did a pretty good job at the free throw line tonight. It was nice to see those go in.”

Trewyn shot a perfect 17-17 from the charity stripe.

“She’s (Trewyn) really just taking upon herself to have kind of this never quit never give up never gonna lose attitude” said Carollo. “It’s really cool to see her playing really well this time of year.”

It was senior day for Trewyn and her fellow seniors, Smith and Andrea Meinhart. Each of the three finished in double digits scoring. Smith finished the day with 13 points and Meinhart had 11.

With the victory, the Warhawks clinched at least a partial share of the WIAC regular season title. With two conference games left, UW-W is nearing the end of their schedule for the schedule. The Warhawks’ next game is against the UW-Platteville Pioneers Feb.14 at the Kachel Gymnasium. Tip-off time is 7:00 PM.