Warhawks fall to Falcons in fight for fourth 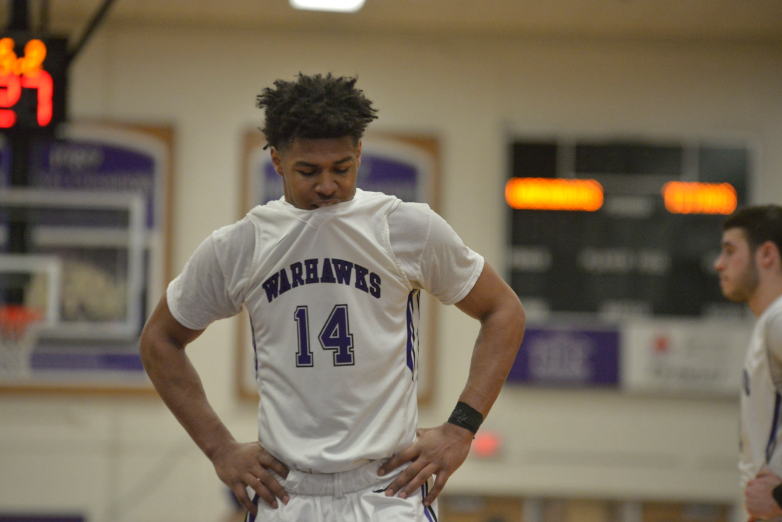 The UW-Whitewater men’s basketball team was defeated 76-66 at UW-River Falls on Saturday night, capping off a week that already saw the Warhawks drop a heartbreaker just days earlier.

The loss drops the Warhawks record to 6-6 in WIAC play, putting them below UW-O and tying them with UW-RF in the standings with just two conference games remaining in the regular season.

“That’s the WIAC for you,” junior forward Mitchell Pfiefer said. “Every night you gotta play hard.”

Last week marked the first time all season that the Warhawks lost back-to-back games. UW-W lost by two points to UW-Oshkosh on Feb. 7.

Junior Derek Rongstad paced the Warhawks’ offense in the loss to the Falcons. Rongstad finished the game with a team-high 16 points, and he got out of the gates hot. A couple minutes into the game the Warhawks hit threes on three straight possessions as the Warhawks built a quick 9-3 lead, Rongstad hit two of those 3-pointers.

The game would go back and forth for the majority of the first half, but over the final 1:18 seconds of the first frame UW-RF went on 10-4 run to take a 38-32 advantage heading into the halftime break, a lead they would never relinquish

Throughout the second half the Warhawks were never able to shrink the lead to anything less than four points. A 3-pointer by Rongstad cut the Falcons lead to five points with just over one minute remaining, but the Falcons were able to close the game out with a 3-pointer and a dunk handing them the 10 point win.

Senior Alex Herink led the charge for the Falcons as he scored a game high 18 points, nailing three shots from behind the arc.

“It was just one of those nights were they were hitting their shots, knocking down some big shots,” junior guard David Sachs said.

This is the second time this season that UW-RF beat UW-W this season as the Falcons topped the Warhawks 81-80 in Kachel Gymnasium on Jan. 6. Those two wins gives UW-RF the tiebreaker for seeding if both teams conclude the regular season with the same WIAC records.

“Every game is a battle in our conference, and we just need to keep grinding and come back next game,” Jensen said.

Junior guard Andre Brown followed his career high 28-point scoring performance on Wednesday with eight points against the Falcons. With 36 points in two games Brown has cracked the top five of WIAC scoring.

Two games remain on the schedule for the Warhawks. On Wednesday UW-W travels to Bo Ryan Court in Platteville to take on the WIAC-leading Pioneers. UW-Platteville topped the Warhawks 84-67 in the first matchup of the season.