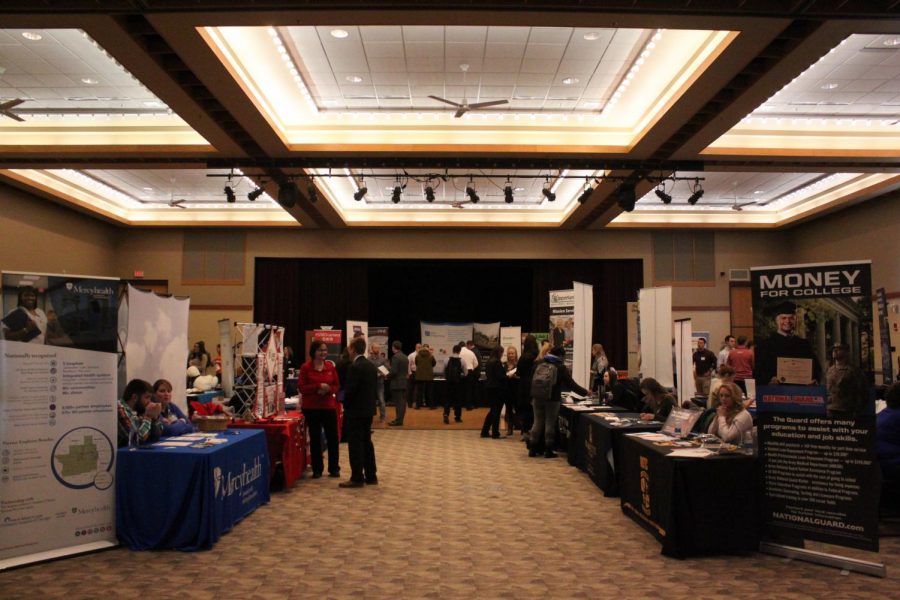 Izzy Martinez represents CollegePossible, a non-profit organization that guides high school kids through college and into the workforce.

If there’s anyone who knows how important it is to get real-world experience while in college before landing a job, it’s her.

The Spring Hawk Career Fair that took place Feb 6-7 allowed students to find opportunities to apply for internships, to talk to a variety of businesses about positions and most importantly, to network.

“I think that the students who have done internships bring more into organizations once they are hired verses someone who has only done classwork,” Ramirez said.

Ramirez, who ran her booth at the fair, has worked for the company for five years, and every year she said they have had one to two Whitewater alumni complete the program.

This is great news for someone like freshman Tyson Kelz who is an undecided business major. Even though Kelz has three to four years left, he echoed the importance of work experience before entering the field.

“I feel like you want to be prepared as much as possible before going into the workforce and know what jobs you like,” Kelz said.

Kelz wants to pursue a career in accounting or financial analysis. There were plenty of booths at the fair for those purposes, but many other industries were also represented. Take, for example, Komatsu Mining Co.

Jameson Ewan and Brian Gereck represented the company at the career fair. Ewan said the company is looking for IT/technology students. One thing he stressed is the difference between in-class learning and on-the-job learning.

“Most of the stuff I’m working on now I didn’t learn about in college; I think college gives you a base set of skills based on understanding. We can then build upon those skills in specific areas,” Ewan said.

His co-worker, Brian Gereck, discussed a trend he has seen change in his field, which shows promise for new hires entering the field.

“A few years ago, students coming in would only want to do one specific thing. Now they want to hop around and try different things,” Gereck said.

The Hawk Career Fair happens both in Fall and Spring, providing consistent opportunities for students in different stages of education.

This is good for students like Kelz, who’s planning on coming back for career fairs in the future.