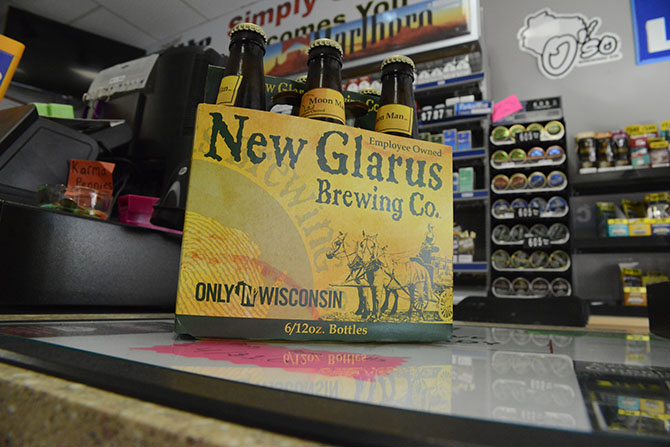 A pack of beer on the counter at Simply Convenient, a liquor store in Whitewater. Liquor stores need a wholesale license to sell alcohol in the state of Wisconsin.

It sounds like the start of a college joke. Three people–a student, a housing rep, and a retired teacher–walk into a bar.

And that bar was just given its full service license by the three: Jimmy Schulgit, a University of Wisconsin-Whitewater Senior, Stephanie Goettl, who works for DLK Enterprises and Carol McCormick, a retired school teacher, make up the councilpersons on the Alcohol License Review Committee for the city of Whitewater.

Stephanie Goettl, chair of the committee, says she loves the different viewpoints they each bring.

“Having all those different worldviews and perspectives is awesome,” said Goettl.

The committee serves two main purposes, and the first involves giving licenses to businesses that want to distribute alcohol. There are three kinds of licenses businesses can obtain:

Beer and Wine (Restaurants); allows serving of beer and wine at an unlimited number
Wholesale (Liquor stores, grocers); limited by ordinances based on the amount in the city
Full service (Bars, some restaurants); based on population and cannot be given out until a vacancy opens or population increases

Whitewater has the specific opportunity of being a college town, so establishments serving alcohol are in more demand. Recently, there was only one full service license available and three business vying for it.

The committee’s other purpose is to hear appeals for people denied operator’s licenses, like bartending licenses. The police chief ultimately determines whether or not a license can be given out. A person may be denied because of a drug or alcohol violation in their past, but they still maintain the right to appeal it to the committee.

Goettl mentions it’s sometimes hard for her because of her job at DLK housing. She says she has personally known some applicants appealing the decision.

“It’s always hard to tell someone that they’ve made a mistake and I can’t let you have what you want because of it,” said Goettl.

Goettl has been on the committee since she was 20 years old. Though 27 now, she was appointed chair of the committee only a month after her 21st birthday.

As a graduate of UW-W and a former student government member, she feels students get a bad rap in the community. Part of her motivation to serve on the committee was to show the community that UW-W students are being responsible.

“Students are actively working in the community to make it better. I felt this was an opportunity to change perceptions,” said Goettl.

Jimmy Schulgit now finds himself in that exact scenario Goettl was in six years ago. Schulgit, a senior biology student, also serves on UW-W student government as well as being a councilperson.

Following along the same path of students representing their community, Jimmy feels his perspective as a student gives him an opportunity to maintain a healthy student environment regarding alcohol.

“I believe I have a special interest in student safety being that I am a student. Many of my constituents enjoy visiting local establishments that serve alcohol. I enjoy helping to make sure they are able to do so safely,” said Schulgit.

Carol McCormick, who also serves on the committee, understands the importance of young adults working within their communities. She worked as a schoolteacher for Waukesha Public School District for 32 years.

McCormick talks about how serving on the committee gave her perspective about how students’ past actions during school have current consequences. Many people who apply serving licenses are in school or recently out of school.

Along with Goettl, McCormick has personal struggles in holding up appeals for bartending licenses because of alcohol offenses. McCormick herself was a victim of an impaired driver accident.

She understands that in many of these cases it may be someone’s job or livelihood, but she must hold up what’s best for public interest and safety.

“Their job could be a life or death changing incident if they don’t follow the rules both personally and professionally,” said McCormick.

The Alcohol Licensing Review Committee makes some tough decisions. However, their different walks of life come together to create a well-rounded group.

Schulgit echoes similar statements the committee made about each other.

“[We] certainly have the interests of the entire Whitewater community at heart,” said Schulgit.