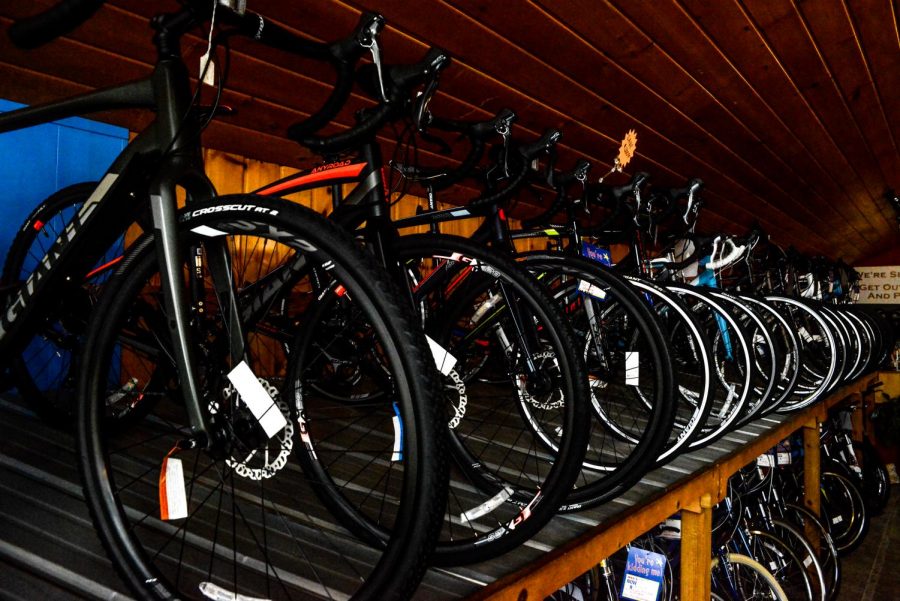 Some bicycles in the Sotherland Custom shop are hanging in the back of the BicycleWise store. John Sotherland has been working with bicycles for nearly 40 years. He launched BicycleWise in 2001.

Sotherland Customs hosted an open house for the community Feb. 24, showcasing how the shop can support people’s passion to get out and ride.

John Sotherland owns the business located in the BicycleWise and Sports Fitness building on W. Main St. in Whitewater.

“My goal is to make a positive impact on the community and promote getting outside and play. We like to promote cycling and help others enjoy cycling,” Sotherland said.

Sotherland has close to 40 years of working with bikes. After graduating from the University of Wisconsin – Whitewater he worked for bike companies like Schwinn before opening BicycleWise in 2001.

He actually sold his house for startup capital to fund BicycleWise. Once the finances had settled and the store had gained a client base, he opened Sotherland Customs inside the shop in 2006 to build specialty frames.

The frame shop is something the store prides itself on. Patrick Killips who works at the store explains the detail and expertise that goes in to making customs frames.

“We’re not gonna sell ‘Walmart-grade’ bikes. You’ve got a framebuilder here who has close to 40 years of experience. We value quality bikes and making our customers the best product,” said Killips

Sotherland uses a process called brazing that involves heating silver, which melts at a low temp to fit lugs and tubes together along the custom-made frame.

As for Sotherland’s tricks that makes his bikes special, he’s a little secretive.

“I can’t give out my recipe – it’s proprietary,” said Sotherland.

Because of that, the custom bikes aren’t  necessarily cheap. The process of building a custom bike can take time depending on the specifics of the customer.

Killips stands by the theory that if they create a very high quality product for very engaged riders, they will thrive. Customer satisfaction is what Sotherland values the most.

“We each try to know each customer’s individual needs and what they want. Because of that, we don’t have frustrated customers,” said Killips.

The experience at Sotherland Customs attracts customers from around the United States. Sotherland said he has customers in California and Mississippi, to name a few.

There is a market for high-quality custom bikes because it’s something that isn’t that readily available anymore.

Around 99 percent of bicycles sold in the United States come from China or Taiwan, according to a market study of the US Bicycle industry by Statista in 2015.

BicycleWise does sell bikes, new and used and not just the customs from Sotherland. However, they are very particular about which bikes they buy for their customers. Any bike sold by the shop has gone through a process of repairing and tuning to make sure they are selling the best quality bikes possible.

In some ways it’s a dying art and Killips feels you have to put the best product forward to keep your customers invested in the business.

Killips hopes the open house will peel back the curtain on the bike-making process to showcase the mastery for potential customers, and encourage riding across the community, campus and beyond.

“It’s to introduce people – a lot of people don’t know what they have here. We’re trying to broaden our market and say thank you to our customers,” said Killips.

Biking season is coming up quickly. Sotherland earmarked March 1st as the kickoff when bikers start coming in to retool their bikes and prepare for the upcoming season.

Killips mentioned how last year’s mild winter extended the season into mid-November so the timespan for biking is now becoming longer.

A longer season means more races. Meaning more riders and more business for Sotherland. Even though a majority of his customers are specialized, he hopes people overall can enjoy biking.

“A good business deal is good for them and good for us,” Sotherland said.