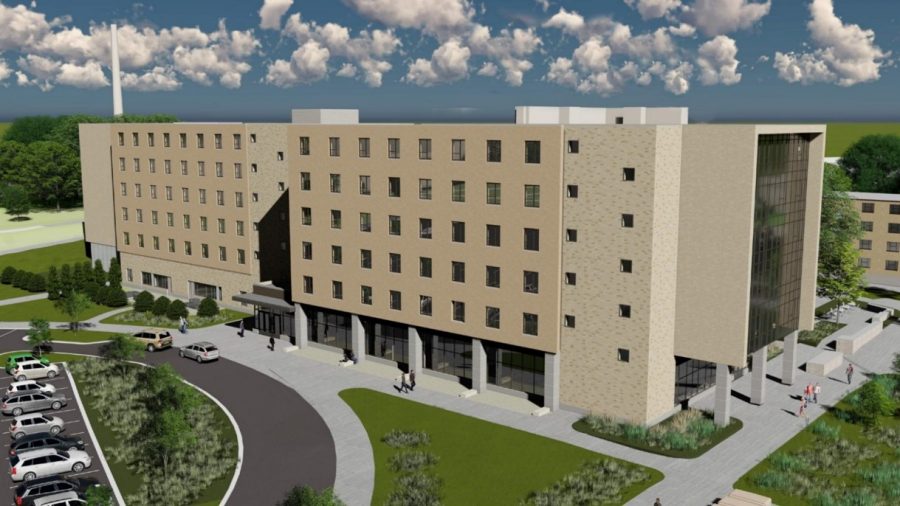 A rendering of what the new residence hall is expected to look like, from the architecture firm, Eppstein Uhen Architects. Ground will be broken for the building in late march, weather permitting.

The residence hall that was designed in the University of Wisconsin-Whitewater’s master plan and built into the State of Wisconsin’s ’13-15 biennial budget will finally be breaking ground this spring after years of delays.

“It was exciting to hear that it was moving forward,” Frank Bartlett, director of UW-Whitewater University Housing said. “Sometimes you get that attitude that ‘it’s about time,’ because it was frustrating.”

In late January, Gov. Scott Walker signed a contract worth $26,715,667 to J.P. Cullen and Sons of Janesville to construct the residence hall that was first approved in 2013. Construction of the new residence hall, set to be built across from Goodhue and Fischer Halls,  and parallel to the St. Patrick Catholic Church’s Calvary Cemetery to the north, is likely to start the week of March 26, weather permitting.

“It’s nice to be able to go forward,” Mary Kaster, assistant to the director said. “It was almost a relief because you put so much into the planning and the anticipation.”

The company has also built a number of other education-related projects in Whitewater, including the current high school in 1994, and was involved in the Whitewater Unified School District’s referendum on the November 2016 ballot as it provided cost projects and analysis for building projects. J.P. Cullen and Sons did not return calls for comment by press time.

The project will take over portions of Lots 7 and 9 commonly used for commuter and visitor parking, as well as the curved sidewalk alongside the northeast side of the parking lots.

Potential impacts or possible solutions for the loss of commuter and visitor parking are still unknown. UW-W Police Services Chief Matthew Kiederlen was unavailable for comment by press time.

The residence hall  will consist of five floors of housing areas in a “pod” arrangement, where 400 students will live in double-person rooms that will share a private bathroom between two rooms that will only be accessible to the four people living in the pod. The first floor will have utilities usually seen in the lower levels of UW-W’s existing residence halls – the computer lab, study and multipurpose rooms, full kitchen and laundry room will all be on the first floor, along with the usual front desk and lobby areas.

The building process suffered years of delays at the state level, of which the University Housing department has yet to see documentation.

The idea that UW-W would be able to build more residence halls in addition to the one that was currently bid out seems far-fetched at the moment, according to Bartlett.

“The state seems to be a little bit slower on allowing the construction of new residence halls,” Bartlett said. “Ours was delayed for some time … residence hall development is doubtful.”

UW-W is not the only UW campus that has experienced delays with its housing projects, Bartlett said. UW-Eau Claire and UW-La Crosse have also had issues with getting residence halls built, but bids are being accepted for UW-EC’s residence halls, according to the State of Wisconsin’s Department of Administration list of construction projects.

The residence hall is expected to be open for the Fall 2019 semester, Bartlett said. The construction will be expedited to a 12-month schedule, rather than 18 months, which is a more standard timeline.

The delay has also increased the cost of building the residence hall. The Royal Purple reported in October 2015 that the project had increased in cost from its original projection of $28 million to over $30 million. The breakdown of the $26 million contract with J.P. Cullen is still unknown – the final cost for the residence hall may be higher depending on whether materials are included in the contract.

“Construction’s booming now,” Bartlett said. “If we would have gone and proceeded earlier in time, it would have been a lot more cost-effective.”

Students can also expect the cost of housing to rise regardless of what residence hall they live in, as University Housing looks to pay off debt incurred by the new construction.

“It’s unfortunate that that’s the case, but as the costs come in, costs have to be paid,” Bartlett said.

The years-long delay of the residence hall has created a “domino” effect on renovations and long-term construction throughout the rest of campus as detailed in the 2014 Comprehensive Campus Master Plan. It includes an addition linking Lee and Bigelow Halls, which already has paperwork being done, adding more residence halls and the eventually tearing down of the Wells Towers. No other residence halls will be going offline for renovations while the new hall is being constructed.

A celebration for the new residence hall is expected and is still in the works, but is likely to be held around the same time as the ground breaking.

Bartlett hopes that having the new residence hall on track to open in the fall of 2019 will allow the campus to continue the growth it has made over the last few years.

“Hopefully [the new residence hall] enables the campus to move forward with its growth agenda,” Bartlett said. “That was the rationale for constructing it, and hopefully it comes to fruition. If you build it, you want them to come.”