Parking prices to rise in fall 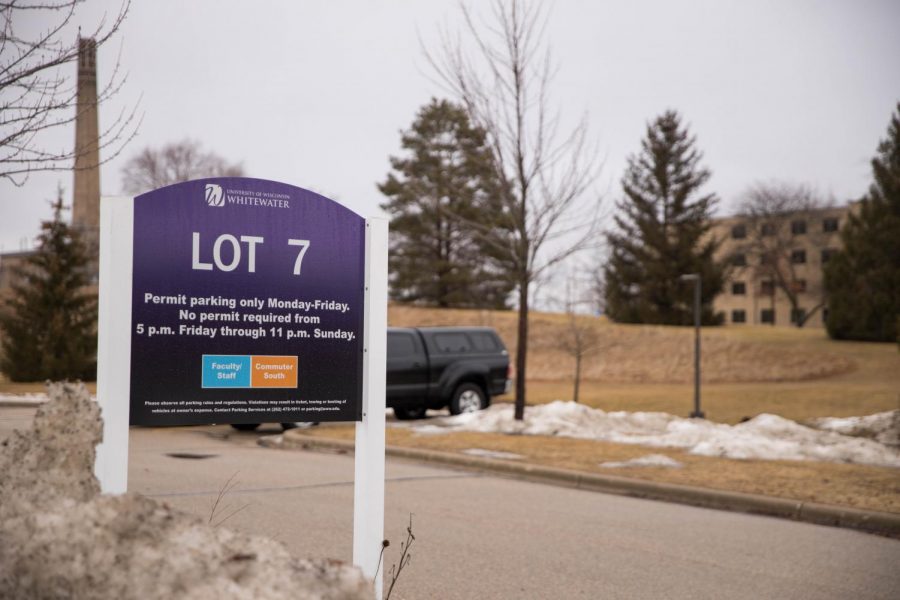 Portions of Lot 7 will be sacrificed to the construction of a new residence hall building on campus as the project progresses. The parking system will be temporarily re-structured.

University of Wisconsin-Whitewater Police Services Chief Matt Kiederlen says his wife isn’t going to be too happy with him as prices rise for on-campus parking  next year – for him included.

While the price changes of parking permits are not yet formally approved, serious structural concerns in the majority of the campus’ parking lots and a lack of a reserve account to fund such repairs are the driving factors behind paying more to park.

The pending price changes, should they be formally approved, will take effect for the Fall 2018 semester.

The Commuter South pass (green) will increase by $20.

The Commuter North pass (brown) will decrease by $10. The decrease will be paired with a wellness initiative for drivers to get their steps in on their way to campus, so an activity tracker will be a part of the purchase. Both faculty and staff would be allowed to purchase this type of parking permit.

Resident passes (yellow) will increase by $20.

Lot 22 near the athletic fields will stay at the same price.

The semester parking passes for commuters will be eliminated as a purchasing option. Students or staff who are planning on only using one semester of the two-semester pass will instead be able to turn in the parking permit and receive a partial refund.

“It’s easier to refund than to keep track of six different types of permits,” Kiederlen said.

While Kiederlen couldn’t give specific details, he did confirm that an alternative transportation service is currently in the works.

“If that does come to fruition, we will likely be providing some sort of discount or included rate,” he said.

The increase in prices will help fund a reserve account for parking lots to undergo badly needed repairs.

In addition, the campus will lose between 150-200 parking spaces in the Lots 7 and 9, often used by commuters and campus visitors, around the week of March 26. That’s the expected timeframe for the fences to go up for the upcoming construction of the new residence hall, University Housing Director Frank Bartlett said in a Feb. 26 article.

Many of the people who currently park in Lot 9 will likely be relocated to Lot 24, right in front of Perkins Stadium.

Don’t hit the panic button quite yet, though – Kiederlen said while students and staff have had to park in areas they find less desirable, the restructuring of the parking system that decongested the southern zone of campus and pushed traffic to the underutilized northern zones now better allows for people to find parking in their respective lots.

“It’s interesting, we’ve actually had very few complaints this year about not being able to find parking,” Kiederlen said. “The complaints we’ve received have been more along the lines of ‘I can’t park where I want,’ but it’s not that ‘I can’t find parking.’ The changes we’ve made with the north and south zones for parking permits seem to really have done what we had hoped, which is pull some of that [congestion] to the north part of campus.”

The restructuring of parking lots that resulted in the color-coded designations of where certain kinds of permit holders are allowed to park didn’t take into consideration the impact of new residence hall construction because construction had yet to be solidified, Kiederlen said.

“We looked at what’s going to work best after all of this,” he said.

She says she needs the exercise anyways.

“I’ll gladly walk farther to classes because I could use the exercise,” she said. “If there will be fewer parking spaces in the north lots due to construction of new buildings, and I’m not guaranteed a spot even though I paid for one, I’ll likely start parking on city streets and walk the same distance for free.”

Junior Melvin Gomez already opts for the northern lots for cost efficiency. He said that finding a parking space was easier last semester.

“It’s starting to become more difficult,” he said. “If those spots [Lots 7 and 9] become affected, then it will be challenging to find an open parking spot on campus in general. Less space equals more time to find a parking spot which leads to more frustrated students.”

Of all of the parking lots on UW-Whitewater’s campus, only a handful – Lots 11, 17, 22 and 24 – are structurally sound. The majority need some work.

Residents who park in Lot 19 could tell you about the way rainwater collects in deep potholes. In Lot 1, congestion with the one entrance and exit out of the parking lot is the cause of much congestion on Prince Street during major events.

Others are just simply crumbling and need a structural overhaul.

“The reason we’re seeing another significant increase is we still need to develop some financial reserves to do some parking lot improvement. We’re way behind,” he said.

Another proposed solution is to construct a parking deck on campus like the one that was suggested in the 2014 Master Plan that would hold approximately 600 vehicles, but Kiederlen said the money isn’t there to construct it – not to mention the anticipated years of hurdles with the state.

Building structures requested by UW institutions tend to get approved by the state Department of Administration much quicker than parking decks, Kiederlen said. What’s “scary” about that, he says, is that as the university moves forward, buildings could be “dropped” on parking lots, taking up space that might not get replaced.

“One of the things I know people have talked about on a number of occasions is that we could use a parking deck,” Kiederlen said. “Well, the first huge hurdle is the cost to do it. The next one, is realistically, if we started pursuing that today, with the way the process works, we might have it up in five to six years … Maybe.”