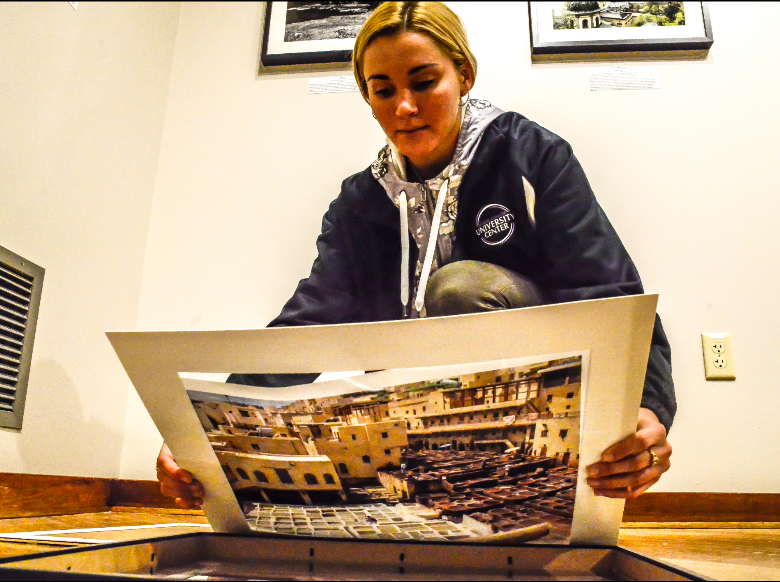 Senior Janay Newman, a public relations intern for Roberta’s Art Gallery, prepares a photo for display ahead of the March 1 grand opening. A reception will be held at the gallery March 6.

The exhibit is led by the Center for Global Experiences office and aims to highlight UW-Whitewater students’ and faculty members’ global pursuits.

“I personally think this is the best one yet,” Global Experiences Administrative Specialist  Dan Colleran said.

Applicants were asked to submit photographs taken outside of their home country and write a statement describing how their photographs tie into the theme.

The contest’s organizers received 101 photo submissions, and the 27 with the highest scores are now on display for the campus to visit.

Global Experiences Coordinator Milliam Lor submitted two photos to the contest. One photo was from Australia and the other from Spain.

“The city center of Salamanca was amazing,” Lor said. “It was all lit up at night. It had a sort of romantic feel to it. I submitted a picture of that plaza because I didn’t expect such a breathtaking place in such a small city.”

Lor said the exhibit offers a great opportunity to inspire students to travel or study abroad.

“I think it is really good for students to see that this is something they can do,” Lor said. “If they can see other students that look like them or in the same situation, hopefully they will fell like they can do it too.”

Although her pictures were not chosen for the exhibit, Lor said she highly encourages students to visit the gallery and to think about connecting with the Global Education office. She recommends students strike up conversations with international students to learn about other countries.

“It is eye opening,” junior Nana Htoo said. “When you travel your eyes are opened to new cultures and experiences.”

Htoo said she travelled to Guatemala over the summer through a social service learning program. It was a four-week program that allowed her to explore a new city and learn about its culture.

Two of her photos from her trip to Guatemala are on display in the exhibit. One of the photos was taken in San Juan on the Lake of Atitlan.

“… Mountains shrouded in a blanket of thick fog,” were the subject of another photo she submitted, Htoo said.

People are encouraged to submit a ballot for the “People’s Choice” awards for favorite photo.

A reception will be held March 6 from 4:30 to 6 p.m. where the winners will be announced at the end of the event.