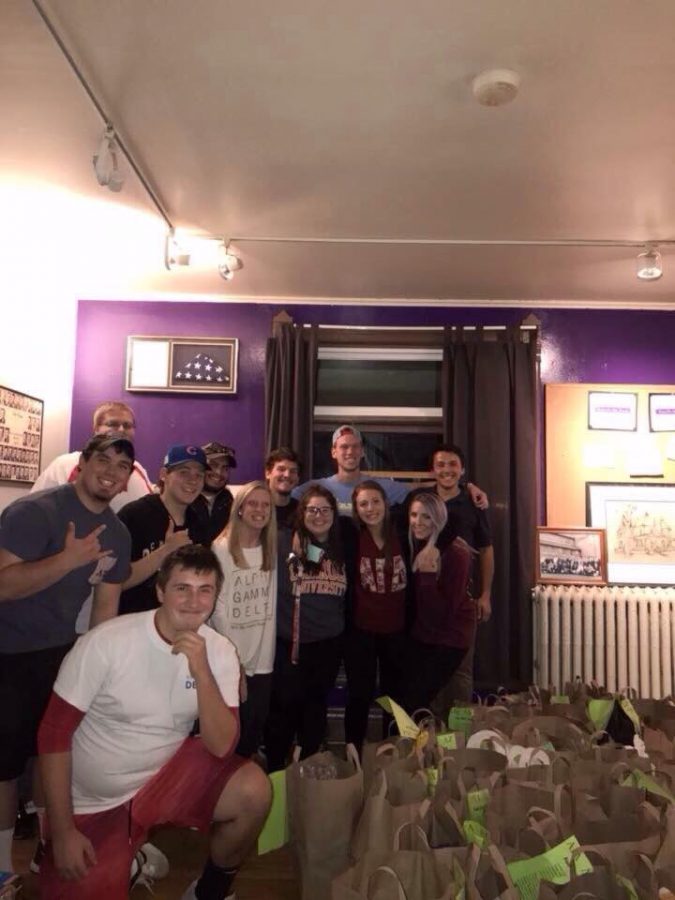 Last spring, junior Alex Zalewski walked into the chapter room at the Lambda Chi Alpha House only to be greeted by mountains of food blocking his way.

“The room was overflowing with these bags of food,” said Zalewski, who is the current chapter president for Lambda Chi Alpha. “You couldn’t even walk through.”

He and his fraternity brothers had raised more than 2,000 pounds of food in Spring 2017 as part of a biannual local food drive effort that Lambda Chi Alpha has led for about 10 years.

In Fall 2017, the University of Wisconsin-Whitewater students raised nearly 2,500 pounds of food. This was also the first time the Greek members expanded their efforts to Milton in addition to Whitewater.

“We love doing this as an organization, so we figured we’d expand to other cities that are close,” Zalewski said. “It’s a cool feeling. This semester, Zalewski led a group of 25 members from three different Greek organizations,  Lambda Chi Alpha, Phi Alpha Theta and Alpha Sigma, which worked together on planning and conducting the most recent food drive.

The students distributed empty bags across the Whitewater and Milton communities on March 4, providing a discreet way for residents to donate food.

“There’s no limit as to what people can put in,” Zalewski said. “Anything helps … every little bit helps. They’re not gonna’ throw away anything.”

They came around a second time March 11 to pick up the donated food from doorsteps and bring it back to the Lambda Chi Alpha house to be weighed before delivering the goods to the Whitewater and Milton food pantries.

“When we go out and pick up, you can feel the weight of the food,” Zalewski said, adding that he enjoys that aspect of the food drive more than the prospect of collecting money during other Greek-sponsored events. “It makes a world of a difference.”

Sophomore Alex Ostermann, who has participated in several of the food drives, helped with the planning and promotional process for the most recent food drive. He said it’s a huge undertaking to pass out and pick up the bags of food each semester.

“It was amazing to see how much we were able to collect in a short amount of time,” Ostermann said, adding that he feels passionate about philanthropy and giving back to the local community.

Zalewski said that during the Spring 2017 food drive, he and his fraternity brother Dom Castro saw a couple families with younger children coming to pick up food items just as they were leaving the Whitewater Food Pantry.

“They came by to pick up the food we had just dropped off,” Zalewski said. “Just to see the joy on their faces … it was easily my favorite moment.”

Castro, a junior at UW-Whitewater, agreed that seeing the appreciation of families in need was heartwarming.

“Seeing their expressions – how grateful they are – and seeing how you’re making that much of a difference in the community is super meaningful,” Castro said.

Castro led the food drive effort last spring, and he said he participated the year before that.

“I’ve done both sides – planning and participating,” Castro said. “It was a lot of fun.”

Ostermann, who is also a member of Lambda Chi Alpha, said the fraternity is looking to expand its food drive efforts in upcoming semesters and to hopefully get non-Greek students involved too.

Any students or community members are welcome to drop off non-perishable food items at the Lambda Chi Alpha house, located at 416 W. Main St. Additional donations are accepted via an online link at give.classy.org/lcafooddrive.