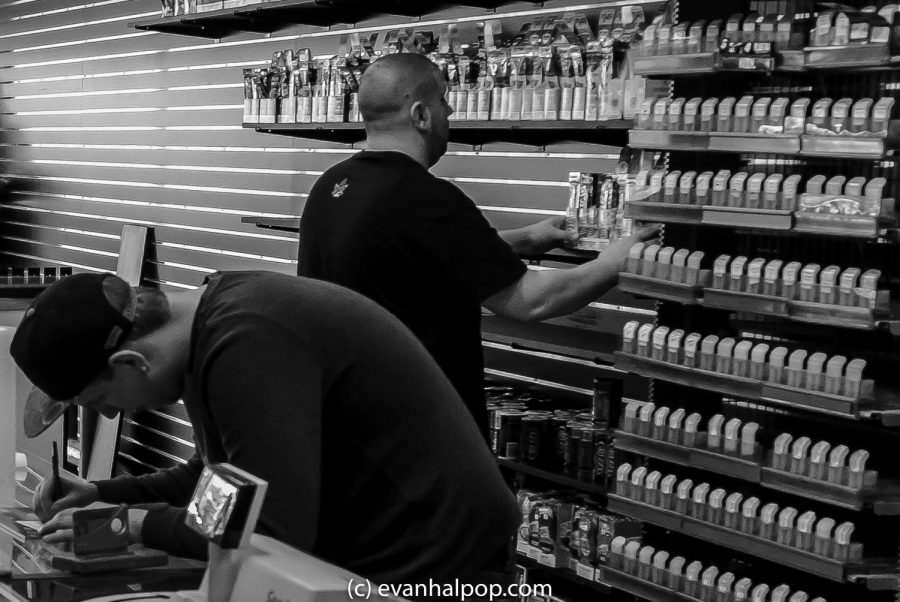 A Lambeau Tobacco employee finalizes a transaction while owner Buck Wazwaz sets up a display case behind the register.

Moe Awad, the general manager of Lambeau Tobacco, works in an interesting setting. Behind him are construction noises, hanging wires and wallpapered, leftover dressing stalls with doors still intact from the clothing store Maurice’s that had previously rented the building.

Hang a left and go through two doors, though, and you’re met with hardwood floor, display cases with white LED lighting, a long counter for checkout with three registers and a sealed cigar room big enough for a king’s ransom. Quite the contrast, but it’s all about presentation, Awad said.

“We don’t want to be your typical dark, old smoke shop. This shop is higher end; we want to provide a nice experience,” Awad said.

Lambeau Tobacco soft opened its Whitewater doors March 1. It’s been providing that “nice experience” to the city of Kenosha for almost two years now. That’s where Moe, and owner Buck Wazwaz, opened up the first shop. The reason for the name is simple: it’s on Green Bay Road. “A lot of cheeseheads,” said Awad.

Awad first heard from his employees in Kenosha who are students at the University of Wisconsin – Whitewater that there wasn’t a good place for students to go in Whitewater. He didn’t believe them. After a meeting in Madison, Awad decided to drive down to see if that claim held true.

Sure enough, after scoping out the town, he found that nothing really fit up to his standard. He saw an opportunity to provide a city and the surrounding area with a service some felt they didn’t have at the moment.

“We thought we could be the one-stop-shop not only for Whitewater, but the whole county,” Awad said.

Lambeau Tobacco began renting the building back in November. The store took about three months to set up, according to Awad. This included a complete re-painting, setting up the cigar room, which needs to be humidity-regulated, shelving installation and a new hardwood floor.

The new building is roughly 5,000 square feet, compared to a normal smoke shop which is 2,000 square feet, according to Awad. Although its more than they need, Awad said it was an opportunity and location they couldn’t pass up.

“We just felt the need for this shop was so, that opening up this size of a shop wouldn’t be so drastic,” Awad said. “Not to say that we settled for this space, because it’s gorgeous and we wouldn’t change anything.”

Lambeau Tobacco’s first store in Kenosha is still under two years old. The fact that they already opened up a second, larger store could be a credit to their business practices but also the current conditions of the smoke and vaping market.

The global e-cigarette and vaporizer market is expected to grow 20.8 percent by 2025 and be worth 61.4 billion dollars, according to a 2015 study by Accuray Research LLP.

JUUL, an e-cigarette brand that launched two years ago, is selling more than twenty million units per month according to JUUL CEO Tyler Gordon.

Awad hopes this market growth carries over to service not just Whitewater and the college, but also to all of Walworth County, and that’s not farfetched in the mind of Awad. Once people find a good smoke shop, they will drive the distance to go there. That’s the culture according to Awad. He drives forty minutes in his hometown of Chicago to go to his favorite cigar shop.

Despite its recent growth, the culture of smoking still bears harsh criticism. Scientists have found trace amounts of nickel, chromium and manganese in e-liquid used for vaping and e-cigarettes. Nickel and chromium in certain forms has been linked to cancer. Manganese has been linked to nervous system damage.

Smoking cigarettes also remains an issue. Smoking accounts for 480,000 deaths in the United States each year according to the CDC. But according to Awad, it’s actually been smoking alternatives that have been the cause of the drop in cigarette use.

“Our customers who come in here were one-and-a-half to two-pack-a-day smokers saying [they] went to less than a half pack because of vaping. Our goal ultimately is to provide what the customers need,” Awad said.

Freshman psychology major Trey Cummins, a customer of Lambeau, talked about what he liked about the new store.

“I like that it’s really close to campus…definitely going to come back,” Cummins said.

There is a need out there and an exploding market for it. Thus, taking over a 5,000 square foot shop may be a gamble worth taking for Lambeau Tobacco. But what are they going to do with all the extra space in the back?

“We’re just gonna have the coolest breakroom of all time,” Awad said.