Senior flexes out another national title 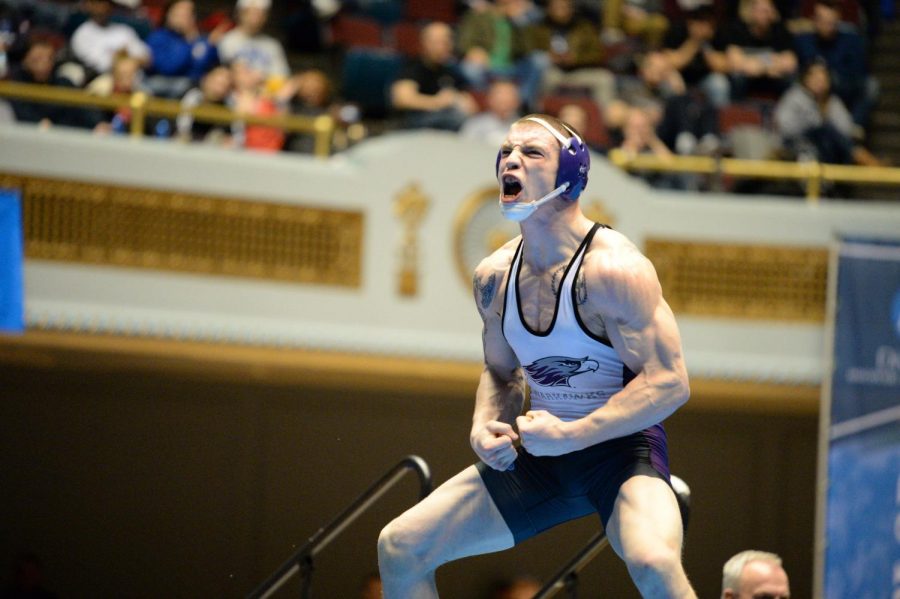 Senior Jordan Newman finished off his UW-Whitewater wrestling career just like he did last year – on top.

Newman became just the second wrestler in program history to win back-to-back national titles, defeating No. 3 ranked Tyler Lutes of Wartburg (Iowa) in the 184-pound division. It was the perfect end to an illustrious collegiate wrestling career, and Newman will most likely go down as one of the all-time great Warhawk wrestlers.

“It was one of the best feelings in the world,” Newman said. “Really just  satisfied for all the work I put in. Just the feeling of going out on top was great.”

As if back-to-back NCAA Division III National Champion weren’t meritable enough, Newman’s fingerprints are all over the Warhawk record books. This past season, Newman’s 28-2 overall record was the program’s 8th best winning percentage of all time (.933), and his 15 pins put him in a ninth place tie for the most in a single season.

Aside from all these accomplishments, Newman’s back-to-back national titles are certainly the highlight of his collegiate career. Newman’s teammate, Christian Dischler, put his accomplishment into perspective.

“Newman’s our first national champ since the nineties or something like that,” Dischler. “He’s our first champ in like twenty years. Then he wins it back-to-back. I think that goes to show how tough it is to do. To not only win it once, but go back-to-back – it’s crazy to think a lot of programs don’t even have a national champ in wrestling. It just shows how intense he was and how good of a wrestler he really is.”

As the record shows, Newman improved consistently throughout his collegiate career despite reaching an elite level early on. As Head Coach Ned Shuck can attest, Newman was a great athlete, wrestler and champion.

“It is truly special to coach an athlete like Jordan,” Shuck said. “I feel incredibly blessed. I get excited for every one of his matches as he frequently amazes me with his power, explosiveness and combinations. When you have all those things in wrestling working together with [his] relentless determination, you have a dangerous man on the mat – and I like having a dangerous man on my team.”

Not just wrestlers, but competitors and athletes like Newman don’t come along very often. He’s a unique athlete who certainly left his mark on the UW-Whitewater wrestling program, including Coach Shuck, who says he learned a lot from coaching Newman.

“Coaching Jordan really taught me a lot of things, but I think the biggest was to be increasingly flexible with training without sacrificing my standards,” Shuck said. “It was really easy for me to trust him as an athlete, to know his body and adjust plans when needed because he was a student of nutrition, energy systems, training and wrestling. He attacked his goals from every angle of his life and he was rewarded greatly because of his effort on all fronts.”

In his final season, a great season for the program (the Warhawks recorded the second most takedowns in program history – 1,020), Newman cemented his status as one of the greatest and most decorated Warhawk wrestlers of all time, returning from one national championship to win another.