From architecture to art 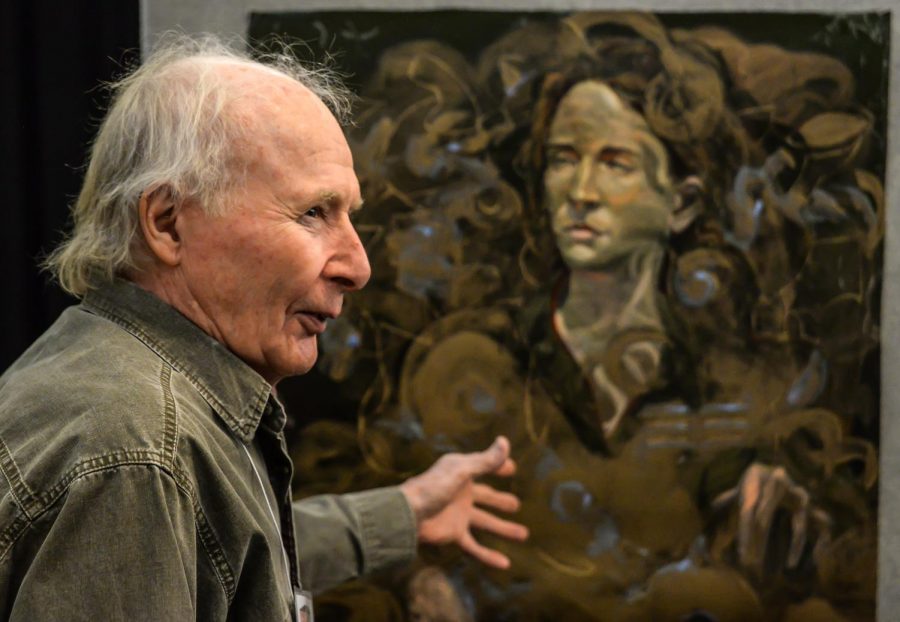 Artist Jason Miklik describes his process behind his portrait paintings at an exhibit feature his artwork in the Whitewater Cultural Arts Center.

Jason Miklik stood inside an art gallery decorated with various portraits he’s painted over the years, reminiscing the processes that went into each work of art on display.

The gallery was hosted by the Whitewater Arts Alliance, a local art committee that periodically brings artists into the area to share their work and passions with students and community members alike.

“I had no idea I had not one but two artists standing there with me,” Long said.

As a result, Long invited Miklik to return and open his own temporary exhibit in the spring. He traveled to Whitewater and opened an exhibit filled with portraits and other art he’s worked on over the years. The gallery opened March 1 and is slated to remain open until March 25.

Many college students have neither the chance nor the resources available to meet directly with artists about their work, Long said, adding that bringing in artists to host an open exhibit helps to encourage student and community engagement.

“It’s really a non-threatening way to introduce art to people who haven’t been involved as much,” Long said.

After high school, Miklik found his passion for art after being exposed to paintings, and he realized that he didn’t feel the same calling to architecture.

Miklik went on to study artistry at the Chicago Art Institute, where he earned a Bachelor’s degree in Fine Arts and then a Master’s degree. Over the course of fifteen years after earning those two degrees, he taught figurative and portrait art at Chicago suburban art leagues, including the Evanston Figurative Art League. He also created murals and landscape art, and he designed full-environment art for some home owners.

Long said Miklik’s interest in portraiture and teaching experience at the Chicago Art Institute stood out to her.

“Whenever you bring in an artist from another area or medium, you bring in a whole new group of people,” Long said. ‘We kind of augment each other; we do things a little bit different, but we try to work together.”

While he was involved with the Evanston Figurative Art League, Miklik and other artists collectively worked on modeling art  to hone their skills together.

“My real joy was teaching portraiture,” Miklik said. “It is an amazing thing. Can you imagine starting from scratch?”

Models in portrait paintings sit for roughly 12 hours in total, generally broken up into different sessions.

“A good part of the energy devoted to studying and teaching portraiture is that you’re involved with models for a long period of time,” Miklik said.

Miklik said he is fascinated by the varying and unique features of human faces, which drove him toward portraiture and sculpture.

“The human face is a very compelling thing,” Miklik said. “This is the stuff of life.”

He’s interested in knowing how other artists would portray subjects and what they see in the faces of strangers.

His portraits contain afterthought footnotes related to the models. Each portrait has features or aspects that depict the model’s personality or interests based on using objects or symbols or styles to convey those ideas. His work utilizes some of the skills he learned from architecture, in part.

Miklik said “the whole idea that there’s a sense of precision” carried over from architecture to art.

He eventually quit teaching because he felt he needed something else in his life. These days, he is more involved with abstract art. Miklik said he’s never been motivated by money.

“It’s about finding me through art and through other people,” Miklik said. “If the artist is in love with what they do and what they’re looking at … they wouldn’t do it otherwise.”