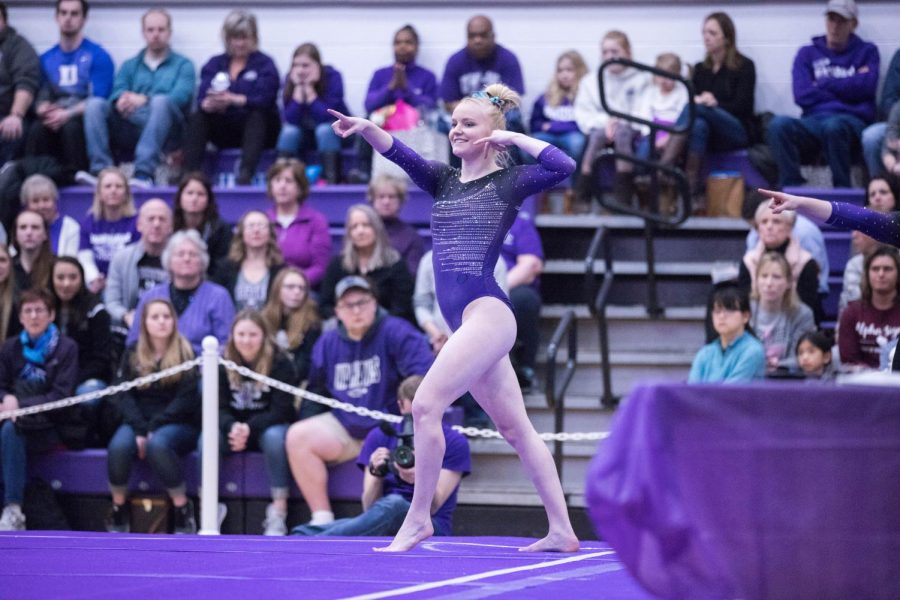 Sophomore Acacia Fossum earned her first ever All-America honor with her performance on the floor exercise during the NCGA Individual Event Finals March 24. Fossum scored a 9.850, tied for third at the meet, and tied for the second highest score in program history.

The UW-Whitewater gymnastics team saved its best for last.

“I couldn’t be prouder,” head coach Jennifer Regan said. “As a coach you can’t ask for a better performance over the last two days. The kids left everything out on the floor last night, that’s for sure.”

“There aren’t words to describe the feeling of everything coming together at the right time,” senior Kate Mierow said. “We had our best routines on everything single event. We went 24 for 24, which was just unbelievable.”

Junior Lisa O’Donnell defended her all-around national championship with a score of 38.625, just ahead of Brockport State’s (NY) Candis Kowalik, who finished with a 38.500.

“This season for me has been really up in the air every meet,” O’Donnell said. “This meet specifically I just wanted to do my best for my team and the seniors. I’m so glad I was able to pull it together.”

The Warhawks’ highest scoring event came on the floor exercise with a 48.750. Two Warhawks finished in the top ten: sophomore Acacia Fossum, who tied for second with a 9.825, and junior Franchesca Hutton, who tied for fifth with a 9.800.

On the uneven parallel bars, UW-W totaled a score of 48.675, tying UW-W’s program record. O’Donnell took the top spot with a 9.900, the highest score at the NCGA. Freshman Blaise Wilson and senior Kate Mierow tied for third with 9.750, while junior Bailey Fitzpatrick finished right behind with a 9.725.

Hutton led UW-W on the balance beam with a 9.750, tied for the top score, en route to the Warhawks setting a program record in the event with a 48.450. Mierow and junior Abby Helmke finished second and third, with scores of 9.725 and 9.700, respectively.

The Warhawks tallied a score of 47.825 on the vault. The lone Warhawk in the top eight was sophomore Lauren Marshall, who finished second with a 9.775.

For the Warhawks, the team’s historic performance was a team effort.

The UW-W senior class of Mierow, Chloe Rehberg, Lewa Evans and Christina Slack leave a permanent mark on the gymnastics program at UW-W, with back to back national championships to end their careers.

“They’re the leaders of the program,” Regan said. “They set the bar very high. They’re just amazing. We’re going to have some big shoes to fill, but they left their legacy with this program for sure.”

The team will celebrate its national championship during a fire truck ride April 28.