The New Testament: Fact or Fiction 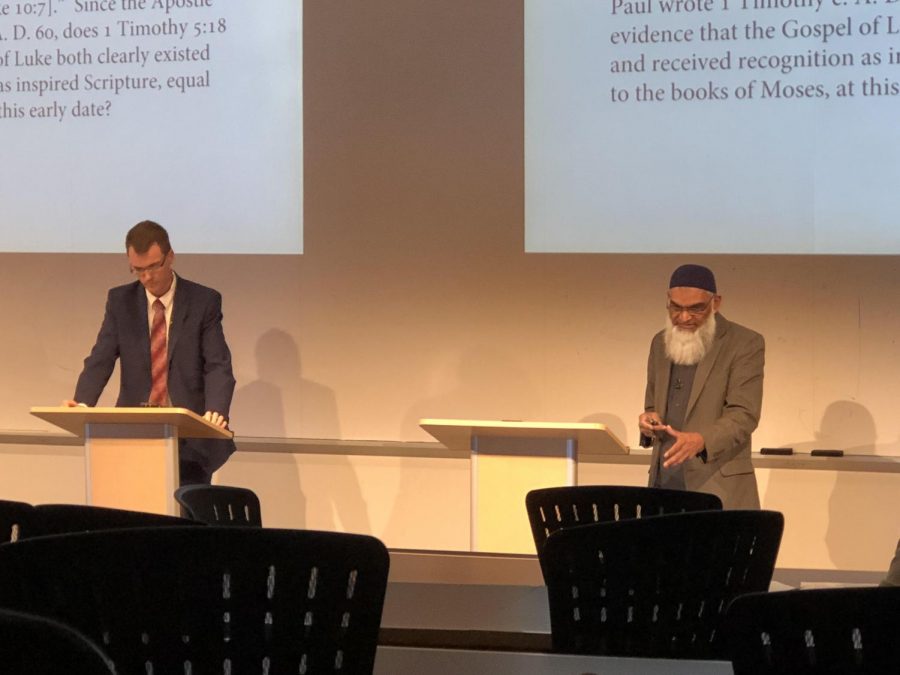 Scholars Thomas Ross and Shabir Ally debate whether the portrayal of the Christian faith figure Jesus Christ was accurate in the Bible. The event was held March 13 in Hyland Hall, Room 2203.

In the end, it all comes down to what you believe.

Believers in Christ organization held their third annual debate in Hyland Hall on March 13. Well known scholars of religion, Thomas Ross and Shabir Ally, debated how certain figures of the Christian faith are portrayed. The event was titled,“The New Testament Picture of Jesus: is it Accurate?”

Ross entered college at the age of fifteen and earned his B.A. in English Literature from the University of California-Berkeley. He then attended Fairhaven Baptist College where he earned a Master of Arts in Bible from Fairhaven Baptist College, followed by a Master of Divinity in Theological Studies from Great Plains Baptist Divinity School, followed by a Master of Theology degree from Anchor Baptist Theological Seminary. Ross is currently working toward a Ph. D. from Great Plains Baptist Divinity School.

In the past two years, he has debated Dan Barker, who is the president of the Freedom of Religion Foundation. When asked what inspires him to debate, he said, “You can see in the Bible that Jesus, the apostles, and other people they discussed things publicly with whoever they could, and therefore it’s a right thing to openly and in a polite and respectful way to give evidence for the belief that the Bible is true, therefore it is just the right thing to do.”

Ross stated that, as an undergraduate in religion classes, the side that was against the inspiration of the Bible was the only one presented.

“I suspected that if both sides are presented, the case for the Bible might turn out to be considerably stronger,” Ross said. “It is a great opportunity to allow people to have equal time to present and allows people to think and evaluate truthfully.”

On the opposing end was Shabir Ally from Canada, who currently holds a B.A. in Religious Studies from Laurentian University in Sudbury, Ontario. That university includes a specialization in Biblical Literature. Ally also holds a M.A. and Ph. D. from the University of Toronto along with a specialization in Quranic Exegesis. He is the president of the Islamic Information and Dawah Centre International in Toronto.

Like Ross, Ally also gets his debate inspiration from his faith and feels encouraged to speak on it publicly.

“I encountered many missionaries for Christianity in particular,” Ally said. “They kept coming to my door and engaged me in religious discussion.”

“That left me with questions about my own faith; I had to do my study to come up with answers. The more I studied the issues that separate Islam and Christianity, the more I saw how much we have in common, and at the same time I saw that where there is a difference the Muslim story is more comprehensive to me,” Ally said. “That made me feel that rather than wait for missionaries to come to me to have this sort of discussion, I should probably go out in public with this sort of discourse.”

While the event was set up as a discussion, Ally “wouldn’t even call it a debate,” and he added that he prefers more open discussion in dialogue.

“I would not pattern it such as there is proof and disproof, because I feel that in debates sometimes people have their guards up and become defensive,” Ally said.

In more of a dialogue setting, Ally said he feels they are talking to each other and actually thinking about the issues, with a possibility of a people changing their minds or broadening their understanding.

Throughout the debate, Ross and Ally covered whether or not the facts of history demonstrate that the New Testament corrupts or accurately presents the original picture of Jesus, touching on controversy with Jesus’ empty tomb and the accuracy of how the New Testament is depicted in the Bible.

The debate is available to view on YouTube. With questions or to seek more information, visit http://www.shabirally.com/ or http://faithsaves.net/unbelief-truth/