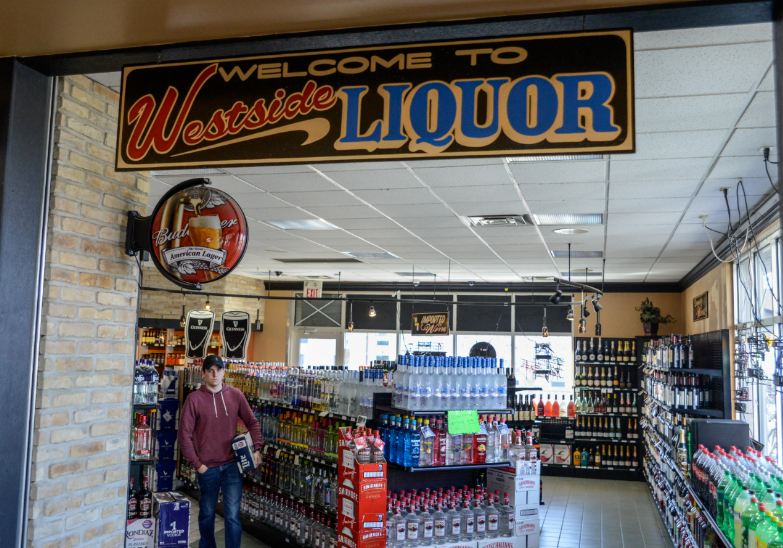 A patron of Westside Liquor heads out the main entrance with their purchase. The liquor store previously was conjoined with Frawley Oil Co., but is now connected to Casey’s General Store after the gas station’s ownership exchanged hands.

A change in ownership prompting Westsider, Eastsider, and two Citgo stations in Whitewater to transition from the previous owner, Frawley Oil Co. to Casey’s General Store.

Three other locations in Jefferson County were also bought out by Casey’s General Store.

As a part of the purchase, the Whitewater Common Council approved the transfer of a Class A beer and liquor license from Frawley to Casey’s at their Jan. 16 meeting.

Although the names “Westsider” and “Eastsider” Liquor will be kept on the signs and are in a separate part of the Casey’s store, it is in name only.

Zach Laituri, assistant general manager at Casey’s, was working at the store for two years before the Frawley buyout.

“We kept the Westside Liquor name because that’s what people know it as,” Laituri said. “This is a relatively new adventure [for Casey’s] so they’re sticking with the old names.”

The transfer of the liquor license was a key piece to Casey’s potential for success.

“The transfer of liquor licenses is a pretty strong indication that things are going in the right direction,” Bill Walljasper, the chief financial officer of Casey’s General Store, said.

Laituri praised Casey’s for the hours they have offered employees.

“They’ve opened up a lot more hours for a lot of employees. Before this I was part time with no room for increase of hours and now I’m full time,” said Laituri.

Casey’s is also looking to open more locations up in areas such as Delavan, Burlington, Rochester and Union Grove. They want to serve smaller communities by pushing expansion.

Casey’s had to close down the drive-thru for a week after the buyout to receive training from the city on how to operate it, in part because of Wisconsin’s drinking and driving laws.

“A lot of the college athletes who play on the wheelchair teams come through without ever having to get out of their car, which is a great convenience to them,” Laituri said.

The drive-thru closes at 8:30 p.m. Employees check the ID’s of all customers in the car using the drive-thru.

The busiest hours for the drive-thru are in the evening hours as people are getting home from work and are too tired to come in and look around, Laituri said.

Students who buy their liquor from the store would like to see the prices remain competitive.

“[Other stores] should have competitive pricing and weekly deals,” Callie Neu, a UW-W junior, said.

Selling the stores was a “bittersweet” moment, he said.

Frawley plans to concentrate on the company’s fuel and lubricant distribution business located in Southeastern Wisconsin.