Softball bounces back from slow start, wins five of six 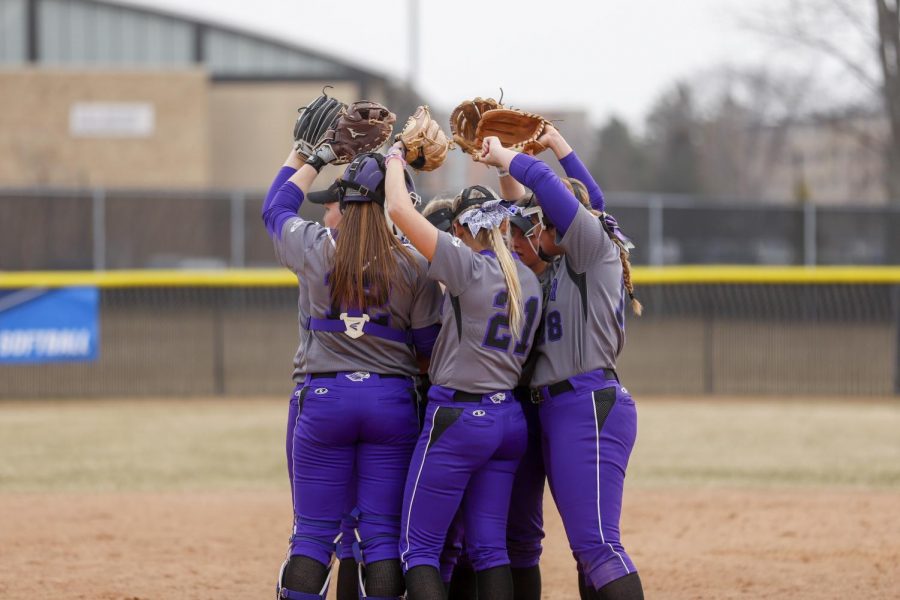 The UW-Whitewater softball team turned things around quickly this past week, going 5-1 in a span of three days.

The Warhawks improve to 14-8 overall and 4-0 in the WIAC following a shaky regular season start in Florida.

UW-W kicked off its busy week by sweeping UW-Stevens Point in consecutive blowouts, 9-1 and 10-2, April 11 in Whitewater.

Freshman outfielder Very Pflugrandt scored the first points in the inning by launching a two-run home run to right field, her second homer of the season.

UW-W scored in every inning in the first meeting before the mercy rule was called.

“I think just getting back to our home field and back into a rhythm has helped,” UW-W head coach Brenda Volk said when asked of the team’s turnaround. “When you are hitting well, it takes a little pressure off both your pitchers and defense and you can just play a little more relaxed.”

The Warhawks continued to hit well in the second game against the Pointers but did not come alive until the sixth inning.

UW-W was on the verge of being shut out until junior shortstop Emily Rux knocked a two-RBI double to left field to tie the game.

The offense did not stop there. Following a throwing error by UW-SP that plated two more UW-W runs, Catino hit an RBI double that scored sophomore third baseman Meg Cohrs.

Senior left fielder Mallory Klotz then sealed the deal with a grand slam to right field, her third homer of the year.

“I credit that to her swinging at good pitches,” Volk said. “As long as she swings at good pitches, she is likely to make pretty solid contact…So far it is going really well as she is leading our team in RBIs.”

Right-handers Julia Camardo and Bella Matthias earned the wins against the Pointers. They allowed a combined three runs on five hits.

UW-W the following day took care of Carthage College in consecutive games, 12-2 and 2-0 at the van Steenderen Complex. Due to inclement weather, the doubleheader was rescheduled from April 5.

The Warhawks continued its hot offense in the first game, plating runs in every inning besides the first and fifth innings.

Klingenmeyer hit a two-RBI single to right center to plate the first two points for the Warhawks in the second inning.

Klotz continued her solid offense by collecting four total RBIs, one being a two-run homer and the other a two-RBI single.

“Mal has been a pretty consistent hitter for us during her entire career,” Volk said. “We moved her from the leadoff spot [where she has been for her first three seasons] to third in the lineup with the hopes of knocking in a few more RBIs.”

Adequate pitching from the Warhawks in the second meeting propelled them to a  second series sweep in as many days.

Klotz got the Warhawks on the board with an RBI triple down the right-field line in the first inning.

Sophomore second baseman Megan Schweitzer collected the other RBI with a single that scored Catino.

UW-W’s trip to the University of Chicago on Friday the 13th turned out to be a decent one, splitting the series with the Maroons 1-2 and 11-0.

Both teams put up good pitching, but the Maroons had the better offense in game one.

Outfielder Abby Hayes tallied both RBIs for Chicago, including a solo homer in the third inning and a fielder’s choice in the fifth.

The Warhawks tried getting a rally going in the seventh but fell just short. Camardo, who was the starting pitcher for UW-W, hit an RBI groundout to score her team’s only run.

“Chicago is usually pretty good at getting the bat on the ball,” Camardo said. “I knew with our defense we could make the outs and today I think the defense helped out a lot.”

The Warhawks led 6-0 going into the third and plated five runs in the second, with RBIs coming from Klingenmeyer, Pflugrandt, Klotz and Rux. Klingenmeyer clocked a two-run homer to get UW-W on the board, her first career home run.

“Hitting is a funny thing,” Volk said. “All it takes sometimes is just one hit to get a rally going. It’s all about momentum. With our ability to score in multiple innings this past week, it just shows that we can count on many people up and down the lineup to get the job done.”

Matthias’ solid pitching prevented any comeback attempt from the Maroons. Allowing just one hit, she now improves to 5-4 this year.

“It’s super nice for anytime for us to have just a little [run] support right off the bat,” Mattias said. “It’s so much easier going to pitch innings.”

The Warhawks will rest up before heading to UW-Platteville for doubleheader action April 17. UW-W will look to stay undefeated in the WIAC while the Pioneers are looking to get its first WIAC win.

“I think right now our team has very high confidence,” Camardo said. “Chicago’s a pretty good team and we fought with them, so going into next week with four conference games it seems like our team has a lot of confidence.”