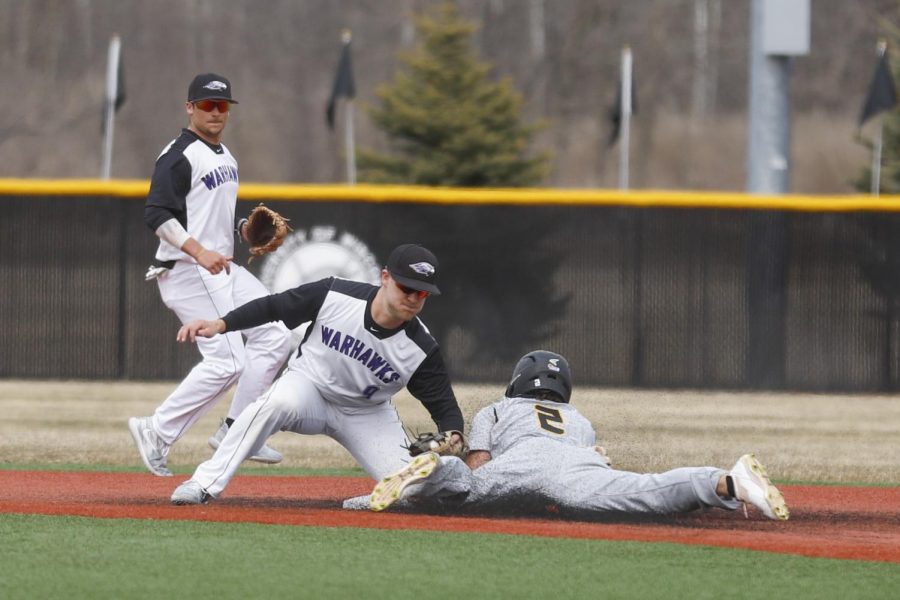 On Wednesday April 11 the No. 2 UW-Whitewater Warhawks split a doubleheader with the No. 16 UW-Oshkosh Titans at Miller Stadium in Whitewater.

In the first game, the Warhawks found themselves up early when junior designated hitter Cal Aldridge hit a sacrifice fly that scored senior Daytona Bryden to put UW-W up 1-0.

The Titans answered by scoring four runs in the top of the second due to a string of hits and a crucial error that brought in one of the four runs. The team recorded five errors in the first game alone.

UW-O then added on to their lead in the sixth inning as they scored two runs off of a pair of hits to put the Titans up by a score of 6-1. This time, the Warhawks were quick to respond in the same inning.

Senior Jeff Szubert hit a leadoff triple, which was quickly followed with a homerun by sophomore Alex Doud that cut deficit in half to make the score 6-3. After two more runners reached base, Aldridge recorded his second RBI of the day when he singled to right to score Bryden. Freshman Nick Santoro reached on a fielder’s choice that scored two runs due to an error by the Titans’ second baseman that tied the score at 6-6.

A pair of errors committed by the Warhawks in the top of the eighth led to the Titans scoring a run that put them up 7-6 going into the bottom of the eighth. However, that one run wasn’t enough to hold off the resilient Warhawks.

Aldridge came up clutch yet again when he homered to lead off the bottom of the eighth to tie up the game at 7-7. Seniors Blake Fleischman and Brett Krause then had back-to-back singles, which put the lead run in scoring position. Santoro then reached on yet another fielder’s choice when the Titan’s third basemen committed yet another crucial error, which brought their total to three on the game.

Sophomore pitcher Riley Gruetzmacher came in to replace Mike Kaska (4-1) in the ninth and recorded his third save of the season as the Warhawks completed the game one comeback by a score of 8-7.

Santoro credited UW-W’s ability to jump on UW-O’s mistakes as one of the reasons they pulled off the win.

“It got out of hand early,” Santoro said. “With a few mistakes by the other team we were able to get back into it and it went our way.”

Daytona Bryden has been a huge part of the Warhawks team this year. His batting average sits at just above .550 and he has an on base percentage of over .600. Despite playing poorly in game one, he believes that their ability to pull out the win shows a lot about this team.

“We played really bad,” Bryden said. “But it shows that we are able to come back against good teams. That’s kind of important to have further along in the season and we came back twice and after being down by a pretty big deficit.”

Game two of the doubleheader didn’t have nearly as much action as game one. In fact, the first run of the game didn’t come until the top of the sixth inning, when a throwing error, followed by a base hit, led to a 1-0 Oshkosh lead.

Errors hurt the Warhawks yet again in game two and, on top of that, they didn’t record their first hit until the fifth inning when Krause singled to centerfield.

Although the scoreboard didn’t show it, senior pitcher Heath Renz pitched a good game for the Warhawks. He recorded six strikeouts, gave up three earned runs and was giving the Titans fits before they got hot in the seventh inning and put up five runs.

After UW-O’s big inning, the Warhawks managed to score two runs by the end of the game but ultimately came up short and ended up dropping the second game by a score of 6-2.

UW-Whitewater coach John Vodenlich was surprised by the amount of errors his team had in both games and believes this led to their poor performance in both games despite winning the first game.

“I think we are very fortunate to even win one,” Vodenlich said. “We did split with a good team, and we need to make some adjustments if we want to win the league.”

The Warhawks next game is another doubleheader in La Crosse when they take on the Eagles. The first game will be on April 14 at 12 pm, while the next game is set to take place on April 15 at 12 pm.