At least 1,300 service hours contributed during this year’s event 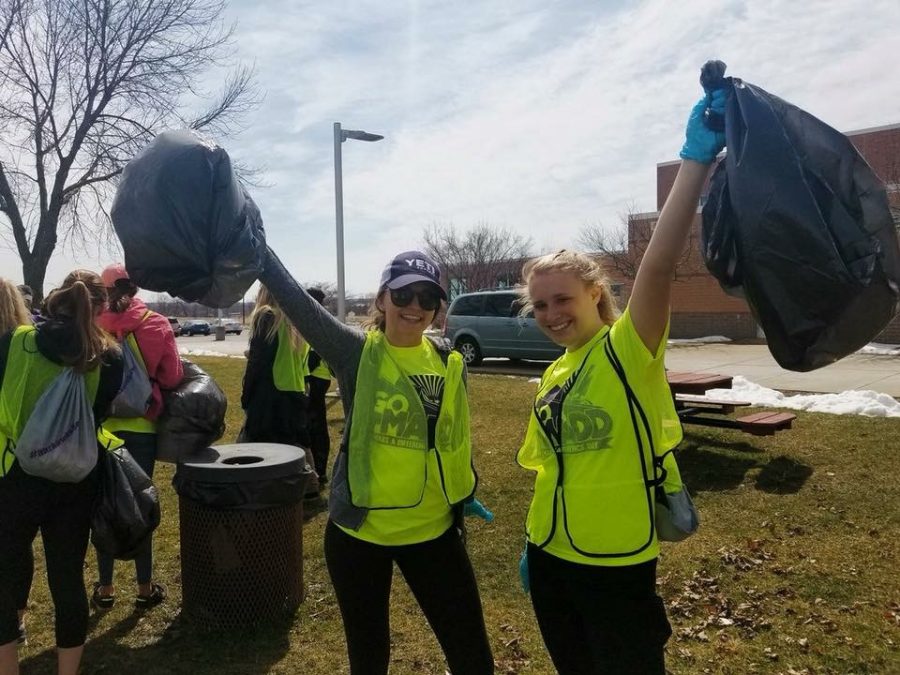 Hundreds of UW-Whitewater students rallied after the Spring Splash festivities last weekend to participate in a clean-up effort throughout the City of Whitewater and the City of Janesville.

Make A Difference Day, an annual volunteering event sponsored by Career & Leadership Development, is focused on getting students involved in cleaning up litter in hopes of giving back to the community and benefiting the environment.

“Usually a lot of litter accumulates during the winter,” UW-Whitewater Sustainability Director Wes Enterline said. “It makes a big difference to have a large base of volunteers.”

Due to unseasonable snowstorms, the grand opening for the campus garden was postponed to a currently undetermined date. Enterline said the planting staff was expected to return to the garden this week to place mulch and compost into the ground, and he added that an announcement about a rescheduled grand opening is likely to come soon.

Also as a result of the April snows, several volunteering opportunities originally planned for the overall Make A Difference Day efforts were canceled. Enterline said an excess of melted snow and water runoff caused higher water levels in Whitewater Creek, which impeded the cleanup efforts.

“That was the concern, was if we could pick up trash if there was still snow on the ground,” Enterline said.

This year’s event coincided with the Sesquicentennial anniversary celebration at UW-Whitewater. Chancellor Beverly Kopper has set a goal for UW-W to contribute at least 150,000 hours of community service by April 2019. Events such as Make A Difference Day will go a long way toward meeting that goal, Tepps said.

“The ultimate goal was as much work as they could get done in three hours,” Tepps said.

A total of 409 student volunteers and 38 CLD interns and faculty members contributed a combined 1,341 hours of service, Tepps said. This shaved off approximately one percent of Kopper’s service goal.

“Our hope was to get at least around that number,” Tepps said. “We wanted to do our best to contribute a chunk toward [Kopper’s] goal.”

Since the event was first organized in 2005, more than 5,000 volunteers have contributed at least 17,000 hours of service, Tepps said.

“I’m deeply thankful of all the students that did come out and participate, and for the support of the City of Janesville and the City of Whitewater,” Tepps said.

Make A Difference Day also fell on the same weekend as Spring Splash.

When Spring Splash came into play, CLD shifted some of its efforts from Saturday, April 21 to Sunday, April 22, Tepps said. Among the variety of reasons was to ensure the safety of student volunteers.

“We knew there would be more trash, but not a drastic amount more,” Tepps said.

CLD service intern Kate McKay helped lead this year’s Make A Difference Day efforts. She said she collaborated with Tepps and other advisers to locate sites and bring on a large force of student volunteers. They also worked to supply tools such as trash bags and gloves.

McKay added that she is an avid fan of volunteering and said it feels good to see the difference made in the local community as a result.

McKay said that with this year’s event coinciding with Spring Splash festivities, she feels the timing worked well to help promote a positive image of students for community members in Whitewater. She said several community members drove by and honked or walked past and offered thanks as the students cleaned up litter around the community.