Baseball chains together wins in five of six 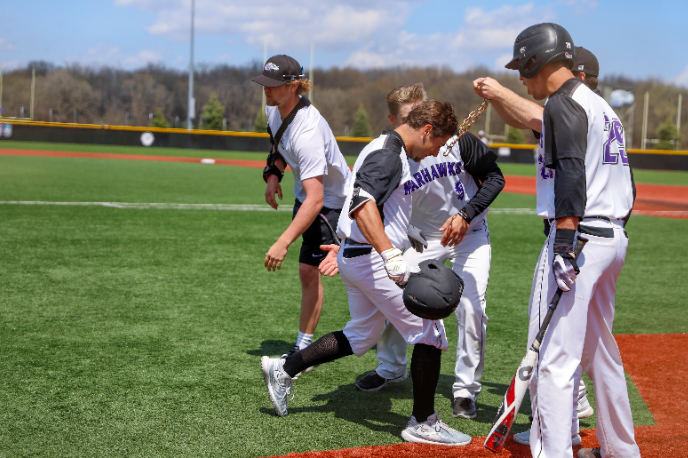 Junior infielder Nick Schrader gets a gold chain around his neck after hitting a homer in the third inning of the Warhawks’ game against UW-Stevens Point May 4.

The UW-Whitewater baseball team is currently ranked No. 2 in the country, and this past week they proved their worth. In just six games the Warhawks went 5-1 and outscored their opponents 76 to 21.

On April 30, they played a make-up game against Saint Scholastica (Minn.) that was rescheduled due to weather. Senior pitcher Austin Jones (6-2) pitched five innings and struck out 10 batters as the Warhawks beat the Saints 13-1.

Despite putting up 13 runs on their previous opponent, the Warhawks didn’t let up the following day when they tallied 22 runs against Saint Norbert on May 1.

Doud hit yet another home run and racked up a season high seven RBIs to lead the Warhawks to a 22-8 victory against the Green Knights. Senior Blake Fleishman added his second home run of the season as well.

UW-Whitewater split their doubleheader May 4 against UW-Stevens Point at Jim Miller Stadium in Whitewater to keep their lead at the top of the WIAC conference.

The Warhawks shut out the Pointers in game one by a score of 6-0 and lost game two 12-8.

Senior pitcher Heath Renz tossed a season-high seven innings for the Warhawks in game one and eventually handed the ball off to freshman Matt O’Sullivan who sealed the win.

For Renz, this was the fourth game of the year where he gave up zero earned runs. The hard-throwing righty managed to strike out 10 Pointers while giving up five hits and a walk. He also managed to work his way out of a bases loaded situation in the third inning.

“I think the big thing for me today was getting ahead in the count,“ Renz said. “In the third inning I didn’t get ahead, but other than that I was strike one, strike two, and getting ahead of them, which also put pressure on them.”

The Warhawks were held scoreless until the bottom of the third. That was until senior outfielder Daytona Bryden hit a triple with two outs, which was followed with back-to-back home runs by junior Nick Schrader and Aldridge.

Junior catcher Mike Aiello got in on the action in the fourth inning when he hit a two-run homer. The Warhawks went on to win the game by a score of 6-0.

Game two was a different story for the UW-W. The Warhawks went up early in the bottom of the first when Schrader batted in Bryden from second to put the Warhawks’ up 1-0.

The Pointers then put up seven runs in six innings to put them ahead of UW-W for good. The Warhawks answered by putting up a run in the fifth inning, when Schrader scored on a passed ball, and again in the sixth when Doud hit his sixth home run of the season.

Aldridge and Aiello both added another home run in game two, but UW-Stevens Point had an answer for every rally the Warhawks threw at them.

They ultimately went on to defeat the UW-Whitewater by a score of 12-8 to split the double header. Junior pitcher Sam Heilenbach picked up his first loss of the season to put his record at 3-1 on the season.

The Warhawks didn’t have to wait long for their next meeting with UW-SP. On May 5 they swept the Pointers in another doubleheader where they won the first game 13-3 and the second game 10-1.

Jones recorded his sixth win of the season in game one and pitched six innings while allowing just three runs.

He had plenty of run support as well. Aiello had three RBIs and two hits, while Aldridge and freshman Nick Santoro added two RBIs.

As a team, the Warhawks had 14 hits and took advantage of two Pointer errors. They went on to beat UW-SP by the seventh inning due to the ten run rule.

In game two, Bryden, who currently leads the country in batting average (.527), had four hits with a home run and four RBIs.

Junior Pitcher Michael Kaska (8-1) threw eight innings in a dominant performance where he struck out 11 and allowed just three hits. The Warhawks went on to win the game 10-1.

Aldridge, who had three homers throughout the week, stressed the importance of beating a tough conference opponent.

“Every game we can win in conference is huge for us,” Aldridge said. “It builds up our conference record and it helps us ranking wise as well.”

As the season comes to a close, Vodenlich knows his team needs to play well down the stretch.

“We will take it one day at a time,” Vodenlich said. “I think that obviously we want to play the best baseball in the next week to two weeks and hopefully we can do that.”

The Warhawks are currently in first place in the WIAC conference and are on well on their way to the NCAA D-III tournament. Their next game is Tuesday, May 8 when they take on Concordia in Mequon, Wisconsin.