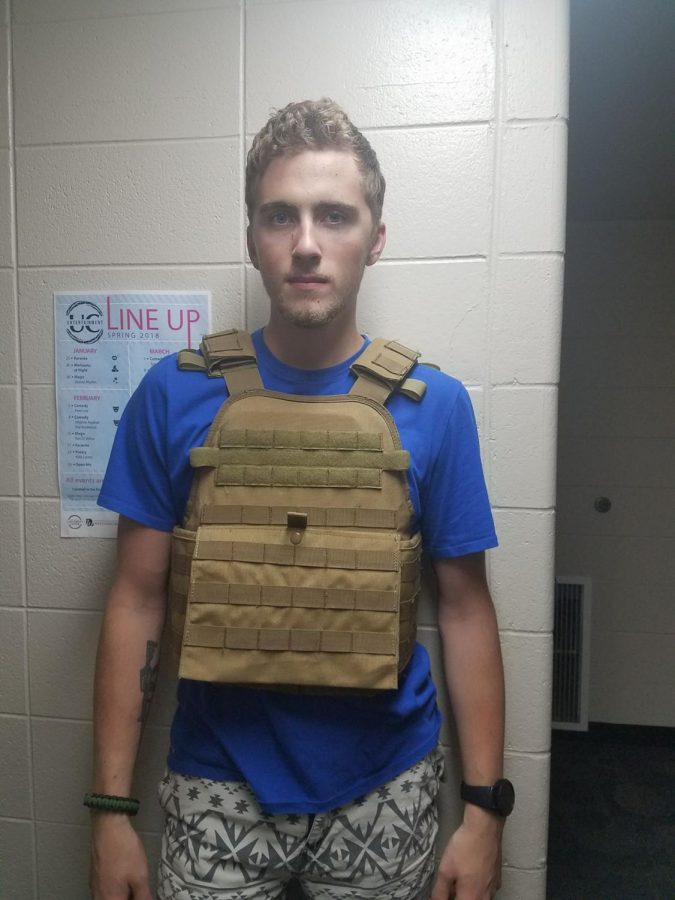 Freshman Alex Sindorf wears a bulletproof vest after receiving a campus-wide alert of a potential threat to safety. The alert was accidentally sent out due to a technical error, UW-W Police Services said.

A technical error with the campus-wide emergency warning system caused a false emergency alert to sound at approximately 3 p.m. on May 13.

An alert was sent out campus-wide via email and broadcast in buildings and residence halls on campus at 3:11 p.m. saying, “There is an active threat to life safety on campus, RUN, HIDE, FIGHT!”

Then, at approximately 3:18 p.m., a second alert was sent out, notifying students that there was no immediate danger and that the alert had been sent out due to a technical issue with the system.

UW-W Police Services Chief Matthew Kiederlen released a statement saying that “at approximately 3:15 p.m. today, we experienced a technical issue with the emergency warning system resulting in the ‘Run, Hide, Fight’ message being broadcasted. There was NO threat to the campus community.”

Maddie Filer, a front desk assistant for Police Services,  said a Campus Security Officer (CSO) was doing rounds around 4:00 to inform students that there was no immediate threat to life or safety.

The message was broadcast over speakers in Residence Halls on campus for approximately seven minutes before a second alert was sent.

Freshman Alex Sindorf, a Fischer Hall resident, said he was lying  in bed working on his laptop when an emergency alarm went off in the hallway over the loudspeaker.

“I didn’t really know what was going on, there wasn’t really much instruction other than ‘run hide fight’ it just kept repeating it,” Sindorf said. “I actually have quite a big fear of school shootings.”

He recently bought a bulletproof vest, which he wore during this situation.

Resident Assistants on the floor told students to stay in their rooms and lock their doors.

Klescewski said upon hearing the alert, she checked a GroupMe chat with other Resident Assistants to verify the threat and discuss a game plan.

“I felt as prepared as I could be, but I don’t think you ever really could be,” Klescewski said. “You could have all the training in the world, and sometimes, you just freeze.”

She added that she feels the university has prepared her well.

“The school does see us as students, too,” Klescewski said. “We leave it up to police and higher faculty to be responsible, but we still try to offer guidance to our residents.”

Klescewski said she checked on her residents and then barricaded her own door.

Kierderlen said the campus police will continue to investigate what happened and provide further information as it becomes available. He added that the police services apologizes “for any undo stress this [incident] may have caused.”