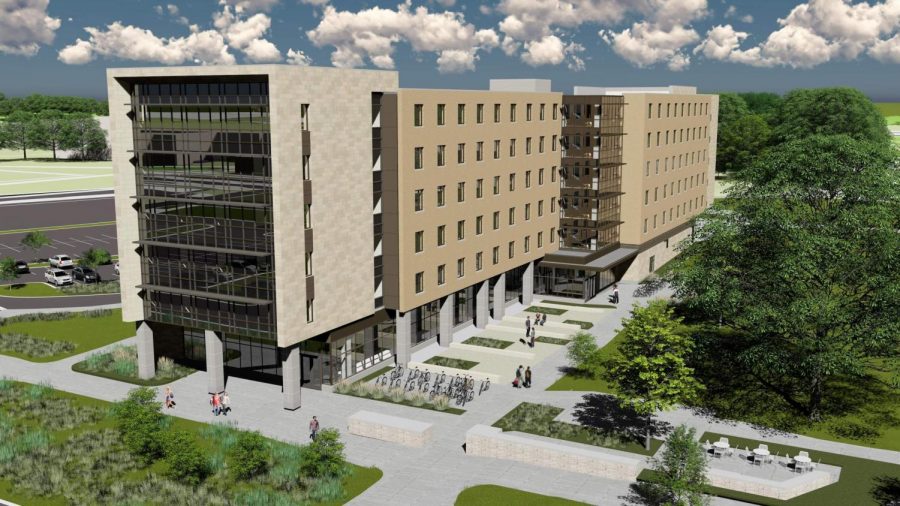 A rendering of the new residence hall being constructed between Goodhue and Fischer Halls. The building is set to open in fall 2019 and will feature pod-style bedroom design.

Construction of a new residence hall near the visitors center on the University of Wisconsin-Whitewater campus is scheduled to continue this school year with completion in time for student occupancy for the 2019-20 academic year.

During the last six months, construction crews have been laying the foundations upon the ground that was formerly a portion of a parking lot outside Goodhue Hall.

“Currently, we’re getting ready for hall opening, and we’re all in the middle of doing about five-hundred different things,” Project Manager Mary Kaster said.

Frank Bartlett, Director of University Housing, said the future layout of the residence hall will include a pod-style setup for rooms.

“There will be two double rooms with a connecting area including a sink and bathroom that will be shared by the two rooms,” Bartlett said. “This is a new construction, so it allows us to use a more modern architectural style which will provide another residential experience here on campus.”

Students on campus are excited to see the construction progress.

“I hope it has AC and maybe some more showers, since my dorm only has four [showers] for the whole floor,” freshman Ciara Clark said. “It’s a bummer that I probably won’t get to live there, but I’m sure it’ll be great once it’s ready.”

Junior Rachel Kushnier, a third-year resident of the dorms, is also eager to see the finished product.

“I think having a new dorm building on campus is great,” Kushnier said. “It allows more students to come to Whitewater for their education. Coming from a girl who has a lot of clothes, I hope the new building has large closet space.”

University Housing officials remain excited about completion of the project and eventually moving students for the next academic year.