‘We are even better together’ 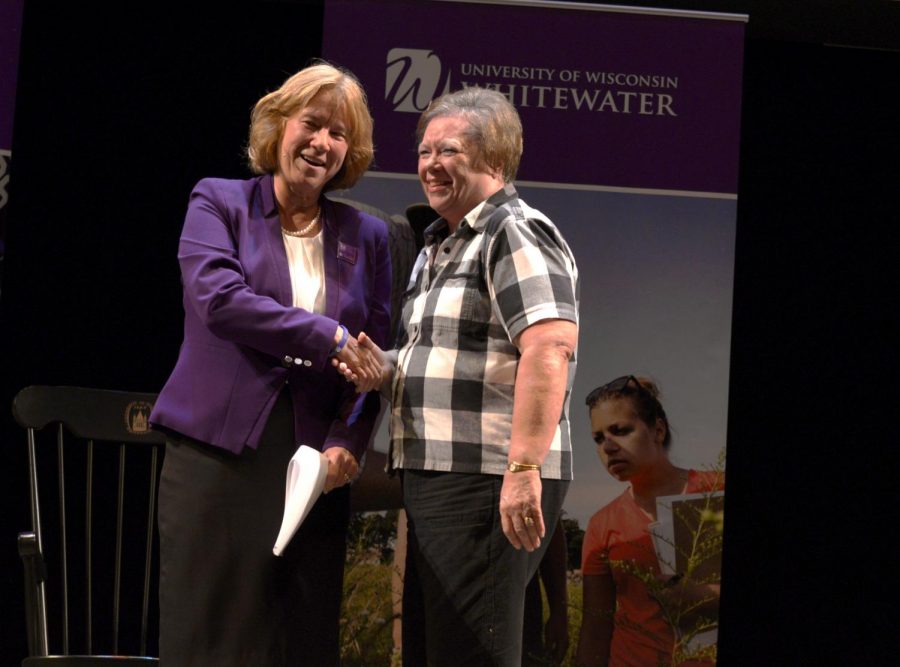 “I remain thrilled and very excited about this restructuring,” Kopper said. “We are even better together. There is no doubt in my mind that is true.”

Kopper delivered the annual address Aug. 27, speaking on campus news and issues that will affect students and staff during this academic year.

In her address, the chancellor also thanked and honored individuals and donors, recognizing their contributions to UW-W.

She publicly thanked everyone in the audience who worked on the reconstruction last school year, and then recognized attendees from UW-RC and welcomed them into the Warhawk family.

Kopper touched on the Purple and White Gala event that was held April 21.

She honored all who were involved with the Gala and spoke glowingly about the keynote speaker, Jeff Glasbrenner, a UW-W alumnus. He is a multiple-time Paralympic medalist and the first American amputee to reach the summit of Mount Everest, and his story has been featured on HBO and Sports Illustrated Magazine.

“He is truly an amazing individual and an amazing Warhawk,” Kopper said.

UW-W is currently involved in multiple funding contracts. Kopper said the university broke fundraising records during the last academic year. It is already more than halfway to meeting its $15 million goal. She noted one donor who recently made a $1 million donation to the Warhawk Emergency Fund, which helps students in need of immediate financial assistance.

“Everytime I’m with donors and alums, they talk about the people and the relationships they’ve made,” Kopper said. “Those that have supported them in and out of the classroom, those that have made a difference in their lives.”

She shed light on a multitude of activities in accordance with the Sesquicentennial celebration, such as a trip abroad to Hong Kong to meet with alumni and an outing to Miller Park in Milwaukee for UW-Whitewater Day and Willie’s Roadshow—which included a trip to Lambeau Field and a visit to former Warhawk Jake Kumerow.

This year’s address also debuted the new alma mater. A contest was held to decide the new lyrics which was won by Class of 2014 alumnus Alex Baldwin. Vice Chancellor Grace Crickette led Gala attendees in singing the new alma mater.

Crickette spoke on administrative affairs, describing 50 “bold steps” they are taking, including a renewed focus on the university’s biennial budget, transportation and logistics and a strong connection between both campuses in Whitewater and Janesville.

“We are re-examining the day to day, we are strengthening our resources, we are action oriented,” Crickette said. “We are getting stuff done.”

Provost Dr. Susan Elrod noted all the work that has gone into Strategic Enrollment planning and recognized all that have been involved in the process.

Kopper discussed the university’s partnership with Cisco and how it is helping UW-W better serve students with disabilities.

After recognizing and honoring all of the people who make the UW-W campus “great,” Kopper said, “It is an honor and privilege to serve as your chancellor. I thank you all for your amazing, noble work. So, let’s go celebrate together and have a wonderful year.”