Campus police allows all visitors if they abide by safety regulations 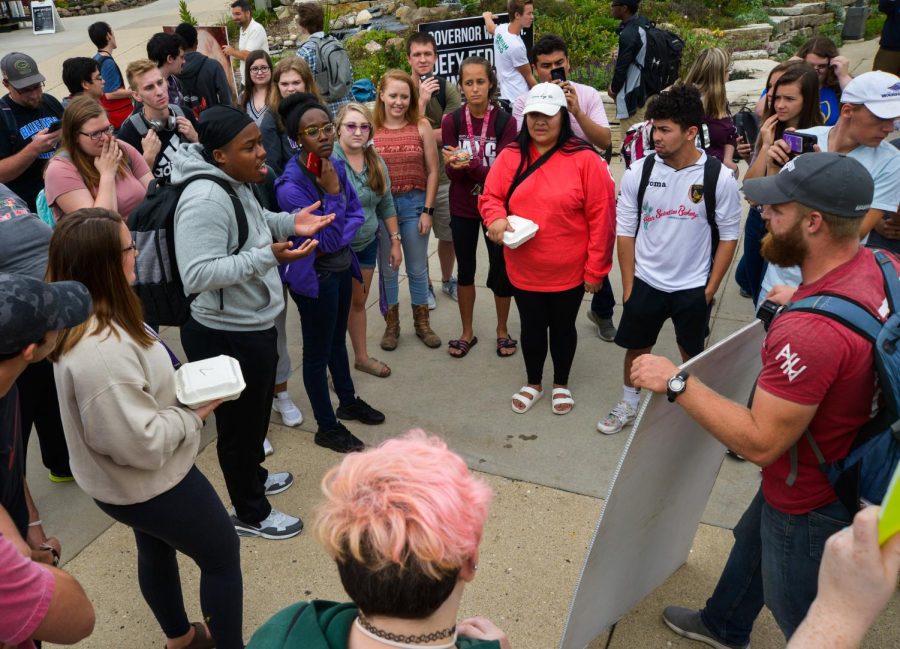 Students debate with an activist from the Abolish Abortion Wisconsin group. The activists came to campus Sept. 19, and some students expressed opposition to the posters on display.

When the Abolish Abortion Wisconsin (AAW) group visited the University of Wisconsin-Whitewater campus Sept. 19, many students and faculty members took issue with the nature of the material presented on posters to back the group’s pro-life stance on the issue of abortion.

UW-W is a state university built on public property, meaning the campus is open to any visitors unless they have been specifically banned. Notifying the campus beforehand is a courtesy rather than a requirement, UW-W Police Services Chief Matthew Kiederlen said.

The police department asks any group that plans to visit campus to abide by their safety regulations. Those limitations prohibit megaphones, signs attached to sticks or poles, anything blocking students’ movement and harassment behaviors.

“Dependent upon the group, the audience expectation and the time of day on campus, all of that will dictate how robust our response becomes,” Kiederlen said.

UW-W does not have a policy requiring campus police to notify students ahead of time about groups visiting campus, but Kiederlen said the department would send an email in advance to warn people if they believed individuals’ safety might be at risk.

Campus police officers urge students and faculty members to maintain their composure in the event of protests where they’re confronted by people who disagree with their beliefs. This makes it easier for the officers to ensure public safety, Kiederlen said.

AAW had informed UW-W Police Services about 24 hours in advance that they intended to visit campus Sept. 19. Officials from other UW System schools where the activists had previously visited also reached out.

It wasn’t the first time the activists have come to UW-W. Kiederlen said that in the 11 years he’s been at UW-W, AAW has come to campus at least six times.

“They’ve always complied with the requests we’ve made,” Kiederlen said. “We monitored that situation, as long as they remain compliant, they can come with the freedom of speech we have and as long as they do not unduly disrupt the educational mission of campus.”

Some students and faculty members felt the activists’ messages were disruptive to campus, while others noted the group stayed within its rights.

“Every social issues movement uses protests and public displays to disseminate messages,” said Doug Meyer, a graduate instructional assistant at UW-W, in a comment on the Royal Purple’s Facebook page. “They have a right to be there. If you see otherwise, you can transfer to a private college that does not have state law governing public property.”

He noted the activists did not act violently towards students.

In another comment on the Royal Purple’s Facebook page, senior Steven Boutcher likened the Abolish Abortion Wisconsin activists’ presentation to Bible study groups that hand out pamphlets to students occasionally.

“It feels like harassment to be engaged by someone essentially trying to sell you something,” Boutcher said. “It’s like a telemarketer in real life, except they’re selling ideas, and I can’t choose to not answer the phone unless I inconvenience myself by deliberately taking an alternate and often more lengthy route to avoid coming within approach distance of them.”