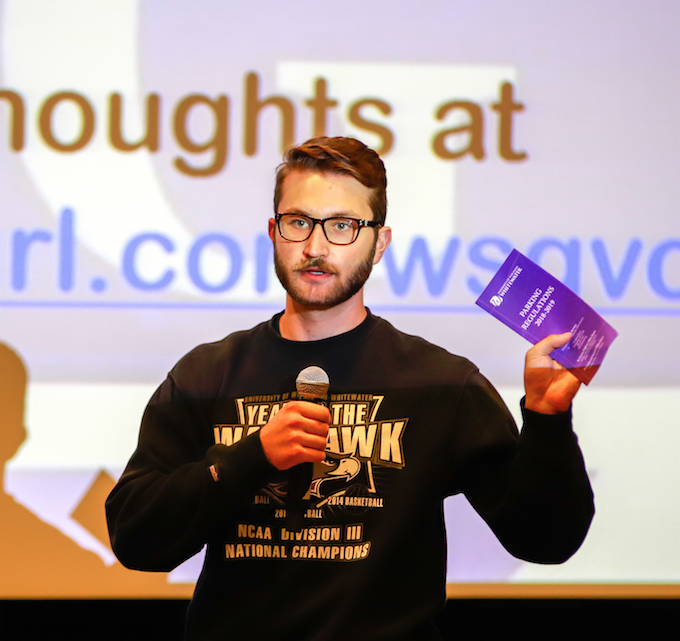 Whitewater Student Government (WSG) held a listening session Sept. 27, inviting students to express concerns they had about the university. Many members of WSG attended, and close to 20 other students came to voice their opinions and make comments.

“It is now Oct. 4,” WSG President Tom Kind said in a follow-up interview. “A whole lot has happened already this year, and we wanted to give [students in attendance] the opportunity to tell us what you think needs to  be addressed.”

One of the main topics of conversation during the session was campus culture regarding sexual assault and harassment, specifically recent allegations involving former Associate to the Chancellor Pete Hill and his ties to Chancellor Beverly Kopper.

“I’m not married. I’m not one of the accusers, but I am a woman,” Freckman said. “The biggest concern for me right now as a woman, as a daughter, as a sister, I want to know that steps are being taken by the student government and by the campus to ensure that this is not treated lightly.”

Members of WSG explained several programs they are involved in, including the “It’s on Us” campaign that will start later in October during the National Week of Awareness. While Freckmann appreciated these efforts, she made it clear she wasn’t sure this would influence effectively.

“Of course it is an uncomfortable topic, but it’s a conversation that needs to be had,” Freckman said. “I know I’m doing something, but I want to know that the campus is also doing something to make sure that males know this is severe.”

Another student, in the audience, who’s name was not able to be identified, made a call to WSG directly.

“I think WSG should make a statement about the sexual assault issue,” said the student. “I think you should make it known that you support victims and survivors.”

Members of WSG commented that there has been a push for legislation, but there was no commitment on any statement.

There was also discussion about the Pro-Life protests on campus, along with issues regarding campus internet, dining halls, and parking.