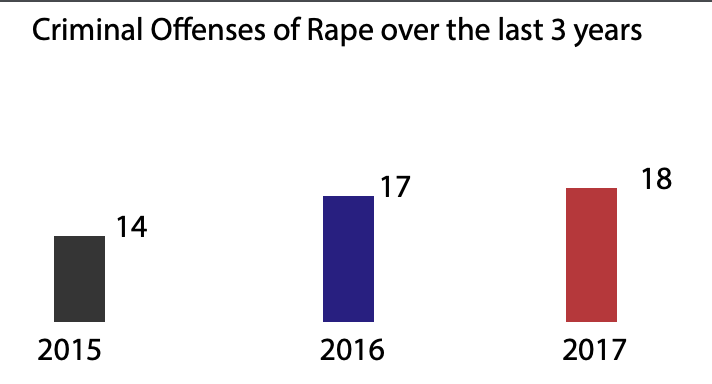 A sexual assault was reported to the University of Wisconsin-Whitewater Police Department Oct. 14. This was the second incident that has been reported on campus this semester.

Similarly to the first reported incident Sept. 10 , the individuals involved knew each other. However, campus police said they are actively investigating this situation. Campus Police Chief Matthew Kiederlen said the department has identified a suspect, and he expects charges to be filed shortly.

With this being the second incident in two months, some students raised questions on how the university police and administrators plan to prevent sexual assaults on campus in the future.

Freshman Maddie Ban lives in Wells Residence Hall and works at Erberts and Gerberts underneath Drumlin Dining Hall. She often walks across campus late at night to get back to her room.

“I’ve never been the type of person to be really afraid of that kind of thing, but it’s hard to feel totally safe walking home, especially when the last one happened in a parking lot,” Ban said.

Kiederlen said the nature of many sexual assaults on campus make it difficult to prevent.

“The type of sex assault we generally see on our campus are oftentimes an acquaintance or dating type of situation, where the people know each other,” Kiederlen said. “This makes it very hard to figure out a way to intercede in that situation.”

He added that the many different opportunities the police department takes to try and educate the campus about sexual violence.

“We do constant education on sex assault and how to protect yourself and how others can intervene,” Kiederlen said. “We’re always actively trying to combat sexual violence. It’s a terrible situation.”

Kiederlen firmly stated he feels that sexual violence is a not a problem simply in regards to our campus, but a problem everywhere.

“I am hesitant to say there is a sort of rape culture on our campus,” he said. “I can firmly say that sexual assault is a problem with society as a whole. It needs to be consistently addressed, fought against and brought the the light of day when it does occur.”