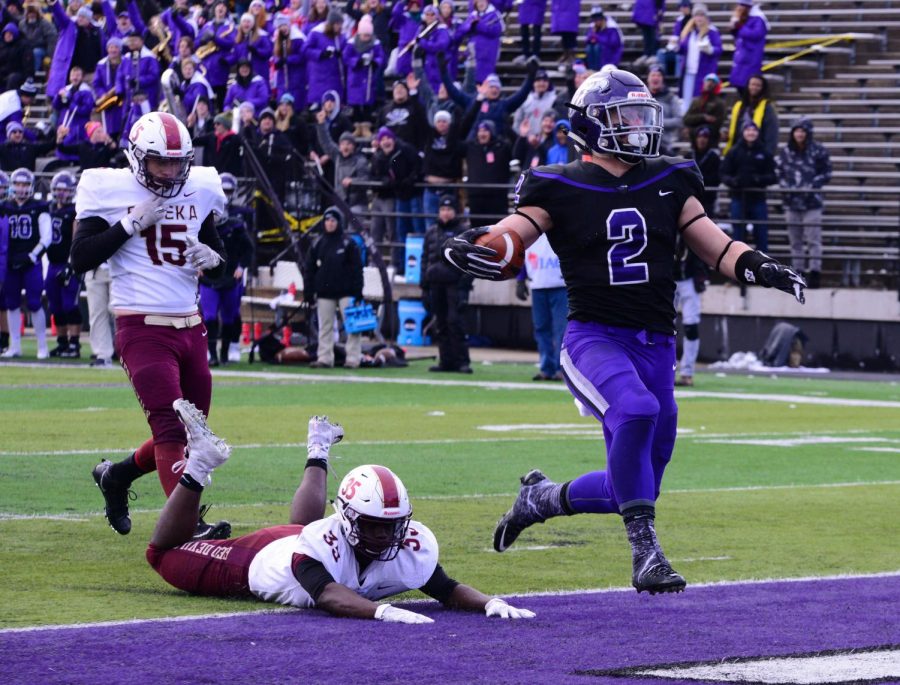 Two down, three to go.

After defeating Eureka College (Ill.) 67-14 Nov. 17, the No. 5 Warhawk football squad dominated St. Norbert College 54-21 in the NCAA playoffs second round Nov. 24 at Perkins Stadium, advancing to the quarterfinals against No. 11 Bethel University (Minn.).

UW-W improves to 12-0 in the process, while the Green Knights end their season at 10-2.

Whitewater posted 397 yards on the ground, tallying a total of 897 rushing yards through the first two playoff games.

“When you can run the football, why throw?,” head coach Kevin Bullis said.

Four Warhawk takeaways also helped propel the team against the No. 2 total defense in the country, including three interceptions.

“We pride ourselves defensively just being the best,” senior defensive back Famus Hasty said. “Every day, we talk about making plays. Those are things that separate us from other teams is that we truly value every down and every player on our defense.”

The Warhawks cashed in on the takeaway with sophomore running back Alex Peete’s 1-yard touchdown run.

Whitewater later in the first quarter scored after sophomore wide receiver Ryan Wisniewski ran it to the house 40 yards out on a reverse.

UW-W was leading 14-0 in the second quarter, but Green Knights’ quarterback Drew Rhodes answered with a touchdown pass on the run two yards out to wide receiver Samuel Staehling, cutting Whitewater’s lead to seven.

Rhodes later in the second connected with Staehling again 25 yards away, and slicing Whitewater’s lead to 17-14 after kicker Wojciech Gasienica converted a 27-yard field goal earlier.

Then with seconds to go until halftime, the Warhawks took the momentum right back when senior quarterback Cole Wilber scrambled to his right, and lobbed a perfect pass to the right corner of the end zone where only a leaping Mitchell Dess could snatch the ball out of mid-air.

Up 24-14 at halftime, the aforementioned 14-yard touchdown pass set the tone in Whitewater’s favor the rest of the game.

Asked on whether or not he had doubt making the catch, Dess said he was doing whatever he could to score for the team.

“Honestly, I didn’t think about it,” Dess said. “I just tried to catch it and whatever happens, happens.”

Rhodes on St. Norbert’s first drive of the second half threw an interception directly to junior defensive back Nate Tranel’s midsection, turning the ball over and allowing Peete to score on a 28-yard touchdown run.

Rhodes at the beginning of the fourth quarter would connect with Staehling for the third time scoring making it a 34-21 game, but that was all the Green Knights could muster.

The Warhawks would answer on the very next drive with a Wilber to sophomore wide receiver Derek Kumerow 18-yard touchdown connection.

Hasty iced the contest with a 48-yard pick-six 19 seconds later, giving the Warhawks a comfortable 48-21 edge.

“It felt great,” Hasty said. “The first half was pretty rough for me…In the second half, I just straight up asked my coach, ‘Can I press these guys?’ and he was like ‘Go ahead. Do what you got to do.’”

Hasty towards the end of the game intercepted Rhodes in the end zone, earning himself a two-interception afternoon.

With the victory, the Warhawks will have to wait and see if they host the third round matchup Dec. 1. But either way, they are just one game away from the national semifinal.