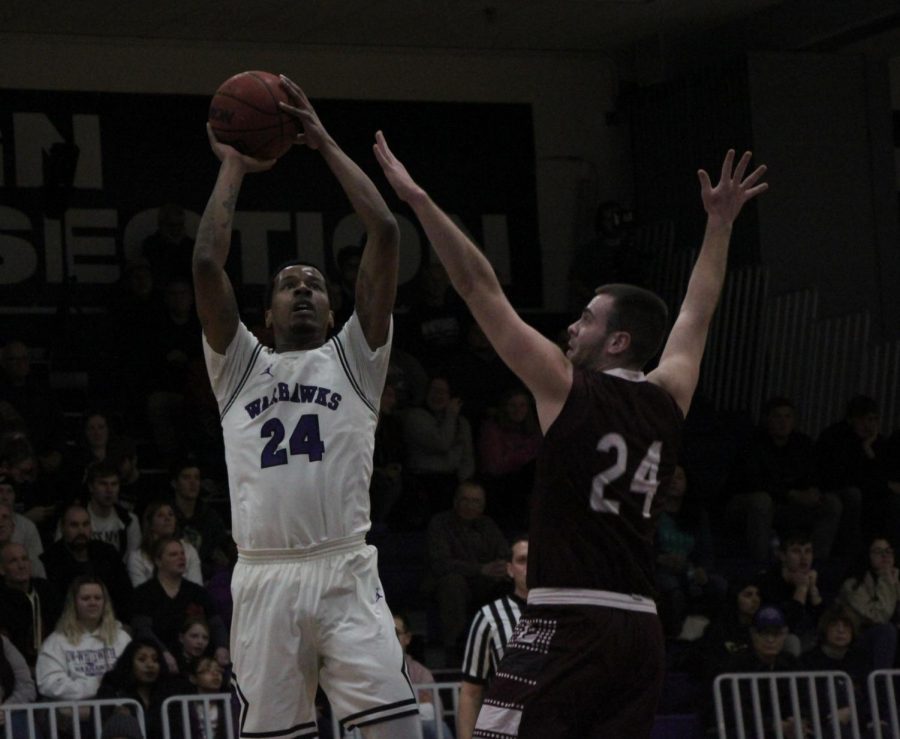 Warhawk men’s basketball has gone 3-5 in the WIAC since their 11-0 regular season start after splitting games against UW-Platteville on the road Jan. 23 and UW-La Crosse at Kachel Gymnasium Jan. 26.

Whitewater took down the Pioneers, 88-80, with much of the credit going to senior forward Melvin Brown Jr.’s 47 points. Brown Jr. in the process broke the school record for most points in a single game.

Brown Jr. shot 69 percent against UW-Platteville on 18-of-26 shooting, and shooting a perfect 4-for-4 from behind the arc.

The Warhawks outscored the Pioneers for much of the second half after being tied at 40 apiece at the break.

Platteville ended up taking a 3-point lead, 70-67, with just over five minutes left. Brown Jr., however, responded by scoring 10 of his 47 down the stretch to help Whitewater pull away with the victory.

“I think the biggest thing is we have to have consistency,” head coach Pat Miller said. “We need more productivity from more of our guys, especially our seniors.”

The Warhawks ran into a brick wall against UW-La Crosse, where they lost 82-63 on Alumni Day.

The Eagle’s defense held Whitewater to just 38 percent from the field and 26 percent on 3-pointers.

“It’s definitely a spark for us when we’re hitting threes,” senior guard Dalton Menke said. “That’s something we needed a couple more times throughout the game, but we didn’t get it.”

La Crosse’s defense made the Warhawks one-dimensional for much of the contest, but could not figure out a way to stop senior guard David Sachs, who led all scorers with 25 points on 67 percent shooting.

Sachs had 20 of Whitewater’s 30 points at the half. The Warhawks trailed by five entering the second frame.

“Credit to my teammates for getting me the open looks,” Sachs said. “I was able to attack the rim and make the right read…We got some good looks that we normally knock down. But unfortunately, they weren’t falling down tonight.”

La Crosse went on a 12-6 run in just over five minutes to start the second half, and only extended its lead from that point on.

“It’s disappointing coming off two good road wins,” Miller said. “To their credit, they just came out and took it to us in the second half and we didn’t have much of an answer.”

The Warhawks have six conference games left to turn things around before tournament play. Whitewater goes on a two-game road trip against Oshkosh and Eau Claire next week.