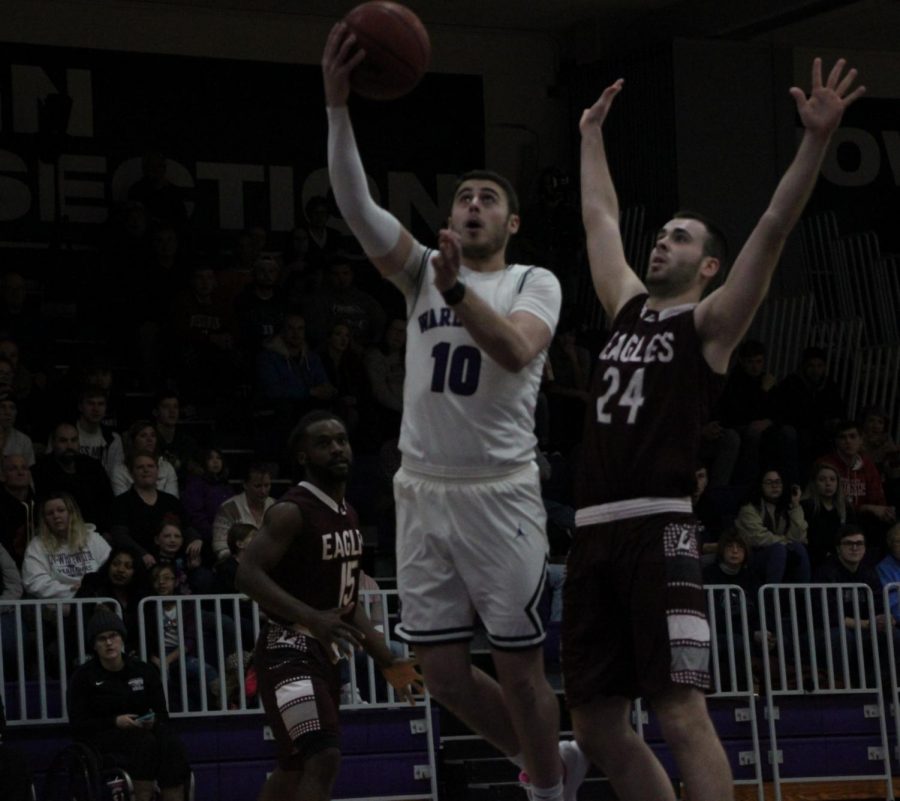 Despite leading by as much as 12 in the second half, the Warhawk men’s basketball team could not maintain it and fell to UW-Eau Claire on the road, 78-74, Feb. 2.

The Warhawks in the process got swept by the Blugolds for the first time since the 2015-16 season. Whitewater won both of its games against Eau Claire last season.

With the loss, UW-W stumbles to 3-6 in the WIAC and has dropped four of its last six. It started out the non-conference season 11-0.

Whitewater shot 60 percent from the field and 62.5 percent behind the arc in the first half, but was held to just 31 percent overall and 12.5 percent on 3-pointers in the second.

“We did not handle situations well,” head coach Pat Miller said. “We played well in the first half. In the second half, our shot selection was poor. Our decision making was poor. We just weren’t able to capitalize on the work we did in the first half.”

The Warhawks sprinted out to a 15-6 run to open the contest, with senior forward Melvin Brown Jr. scoring five of those.

Eau Claire eventually trimmed down Whitewater’s advantage and briefly led, but UW-W responded with a 15-5 run to close the opening half.

Freshman forward Jack Brahm converted a layup to widen UW-W’s lead to 12 at the start of the second half, but the Blugolds made three consecutive 3-pointers to cut Whitewater’s lead to 50-47.

Brown Jr. converted a free throw to tie the game at 71 apiece with 4:16 remaining, and the score remained the same for over two minutes.

Senior guard Andre Brown drew an and-1 with 41 seconds left and made the ensuing free throw, but guard Cam Kuepers’ 3-pointer on Eau Claire’s next possession sealed it.

“It’s positive we battled back,” Miller said. “But it’s kind of the same elements that caused us to lose the lead in terms of shot selection and decision making. I think two of our last three shots were 3-point shots by Dave Sachs and Andre [Brown]. In both situations, we’d much rather have them attack the basket because that’s their strength.”

The Warhawks’ next road test does not get any easier as they will have to face conference-leading UW-Oshkosh Feb. 4. The game, which was originally scheduled for Jan. 30, was moved to Monday because of the Polar Vortex.

“We’re obviously in a position where we have to win, period,” Miller said. “It starts with Oshkosh…We’ll just go forward being as positive as we can.”

Whitewater has five conference games remaining on the schedule before the tournament rolls in, and is in danger of clinching its second consecutive losing WIAC season.